Through a health initiative that demystifies menstruation by using games and stories, schoolgirls in rural Jharkhand are learning about menstrual health and the importance of nutrition 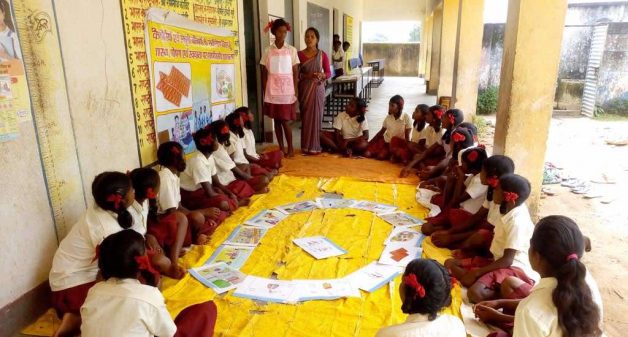 Through stories and games that demystify menstruation, schoolgirls in rural Jharkhand learn about menstrual cycle and hygiene (Photo by PHRN)

Sunita Kumari, a class VIII student, was at school when she reached menarche. Scared and ashamed of the stain in her uniform, she informed the teacher and ran home. “No one had told me what to do in such a situation. I was scared that the boys would see the stain and laugh at me. I had seen the boys laughing at another girl when she got her period while at school,” she said.

This is Sunita’s memory of her first period. She lives in Patratu village in Ramgarh district, Jharkhand. Here and in most parts of rural India, a tradition of trauma and shame persists around menstruation, menarche in particular.

A health initiative is now creating awareness among adolescent girls in rural Jharkhand about reproductive health in general, and about menstruation and menstrual hygiene in particular, so that the girls do not shy away from discussing their problems.

46-year old Emlia Guria of Ronhe village in Torpa administrative block, Khunti district, is a nodal teacher in the government-run Adolescence Education Program in a middle school. She distributes iron tablets and sanitary pads supplied by the government, and counsels adolescents on different life skills.

She said that she found it difficult to get the adolescent girls to talk about their menstruation-related issues because of cultural factors and the shame associated with menstruation. “I had the same problems as these adolescent girls when I was growing up; my back would hurt, but I was too ashamed to tell anyone,” she said. 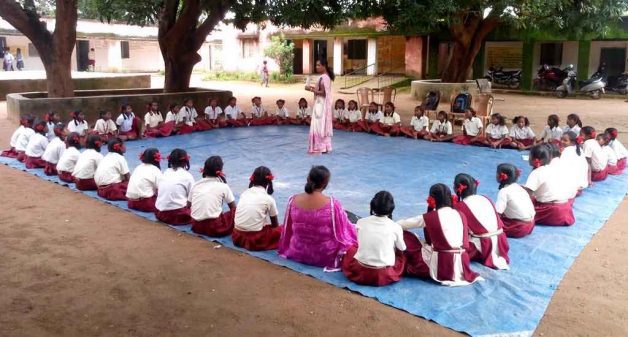 Over the course of one or two sessions in each school, the PHRN-PRADAN team discussed adolescent and reproductive health with girls in classes VI to X, through storytelling, experience sharing and interactive games. They discussed about the physical and emotional changes that take place during adolescence, importance of nutrition, anemia, shame associated with menstruation and early marriage, to name a few.

14-year old Sunita said that she felt better after hearing the story of Shila (a character in the adolescent health module taught in the school) during the session. Like her, Shila also got her first period when she was in school.

While Shila seemed as scared as Sunita was, none of the boys in school made fun of her, and she later learnt how to take care of herself during her periods: how to clean her private parts, and to dispose of the menstrual cloth after three months of use.

“I have learnt everything from Shila’s story. I also dispose of my sanitary pads and cloth properly now; I clean and then bury them in the ground instead of throwing them into the local pond,” she said.

One of the components of this initiative is training women volunteers from the villages. Called change vectors or badlav didis, they are selected by the self-help groups (SHGs) they belong to, and trained in different aspects of health and nutrition, ranging from immunization to adolescent health. They in turn train their peers, promoting individual and collective action for better health and nutrition.

“For three months during monsoon, the SHGs do not have any meetings as the women are engaged in rice transplantation,” said Sunil Thakur, the PHRN block coordinator in Torpa. “We were already running a module on adolescent health with adult women. So we thought of utilizing this time to take it directly to adolescent girls.”

With the permission and support of the block level education officer (BEO) of Torpa, the team conducted a meeting with the nodal teachers of the block in August 2018. This was followed by visits to middle and secondary schools in the block to conduct workshops with adolescent girls. 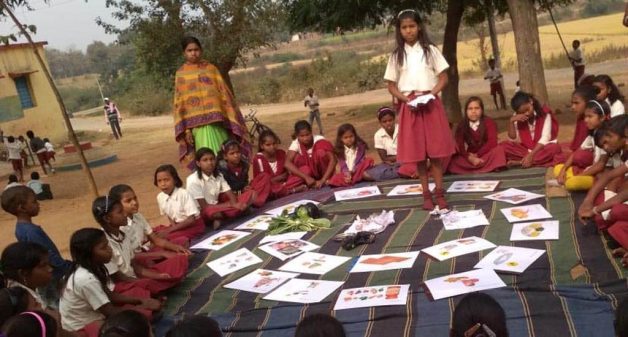 “We liked the idea a lot, because the messages on adolescent health and nutrition can reach each household through two routes: through the mother in SHG meetings, and the daughter through school,” said Rahul Chandra, the PHRN block coordinator in Gola administrative block in Ramgarh district.

Guria said that several of the adolescent girls she works with don’t get nutritious food, become anemic and grow weak during their adolescent years. However, the two-pronged approach adopted by the PHRN-PRADAN team has proven effective.

Neha Bhengra, a class VII student in Torpa block, said that after attending the meeting at school, she started taking the iron tablets distributed at school once a week. “Earlier, I wouldn’t take them because they made me feel nauseous, but the didi who came to school said that I would not feel weak if I took them and the nauseous feeling would go away after the first few times,” said Neha.

12-year-old Ailin Hiren, standard class VII student in Sonpurgarh village of Torpa block, is proud that she has helped change the diet in her household. After attending the meeting on nutrition, she discussed the importance of eating green leafy vegetables with her mother and sister.

Everyone in Ailin’s household now eats a tri-colored meal which includes saag (green leafy vegetables), rice (white) and dal (yellow), at least once a day. She said that, during their periods, she and her sister do not feel so weak as before.

At the heart of such changes at the household level is better awareness, combined with a questioning of the shyness and shame associated with menstruation. So far, the program has reached over 3,000 adolescent girls across 80 schools in Jharkhand.

Bhagwati Bala, the headmistress of a secondary school in Murudih village in Gola block said that the meetings have helped the girls open up and feel less scared and ashamed to talk about their periods. “Earlier, some of them wouldn’t even tell their parents about their periods, but now they talk at least to their mothers,” said Bala.

Phulmani Bhengra, a mother of six children in Sonpurgarh, agrees about the awareness. “Two of my daughters told me that they discussed about menstruation at school,” said Bhengra. “Neha told me that it is important to dry the menstrual cloth in the sun, so that all the germs are killed completely and we don’t fall sick. I didn’t know this earlier. I have now started drying our cloths in a sunny part of our backyard.”

“Yes, we dry it in the sun now. Ma’am said that everyone menstruates and it’s a normal thing, so why should we be ashamed?” said her daughter Neha. With this awareness, adolescent girls as well as the older women are shedding their fear and shame associated with menstruation.

Kandala Singh is a qualitative researcher and public health practitioner based in New Delhi. She is part of the Public Health Resource Network (PHRN). Views are personal.

Kandala Singh is a qualitative researcher and public health practitioner based in New Delhi. She is part of the Public Health Resource Network (PHRN).