The Gond tribes, custodians of agro-biodiversity in central India, have traditionally grown millets that are suited to local climate and terrain. The dying practice needs revival and encouragement 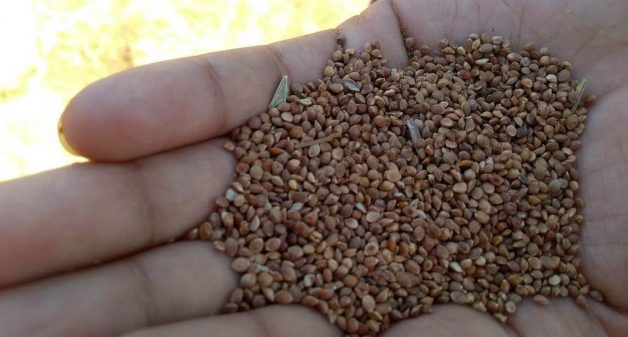 Kodo millet stored by a farmer in Khamri in Panna, where most of the tribes have stopped millet cultivation (Photo by Saurav Vema)

“We don’t know how everyone stopped growing kodo and kutki. My father used to grow them when I was a child. Then the millets slowly vanished,” said Pradeep Yadav (45), a farmer from Gahadra village in Panna district.

Known for growing well in dry zones under minimal soil fertility and moisture, kodo (kodo millet) and kutki (little millet) are minor millets grown across India as rain-fed crops. These were the traditional crops of Gond Tribes of Bundelkhand, specifically of Panna region that has a predominant population of Scheduled Tribes, Gonds primarily, and other depressed communities.

Tribal communities are mostly dependent on forests, farming and other labor work for which they migrate for a significant period in a year. In the past few years, they have been facing problems due to displacement from forests, man-animal conflicts, poor agriculture yields and fewer livelihood opportunities, resulting in a critical situation of poverty and vulnerability.

Lately, people in the region, especially the tribes, have stopped their long-established practice of growing kodo and kutki millets, and instead grow crops such as wheat, sesame, mustard and pulses.

Kodo and kutki usually grow better under dry weather conditions. Hilly upland and stony lands with low water retention capacity are generally fit for these crops. The Bundelkhand region has such terrains, where the land has stones with a mixture of black and red-yellow soils that are poor in organic nutrients.

The climate is hot and semi-humid. Summers are the hottest, with temperature rising beyond 400-420 C. Availability of water, especially of good quality, is a luxury, apart from the rainy season. Surface water runs off fast in the hilly uplands, decreasing the rate of recharge. The high uncertainty in rainfall accounts for recurring famines, floods and droughts.

According to Pannalal Tiwari of Gahadra village, millets cannot be grown in the same place again. So the villagers practiced shifting cultivation. “My grandfather had a big land. He segregated them into different patches for kodo and kutki, other millets and vegetables, besides a barren patch. He used to rotate the crop land and barren land,” he said. 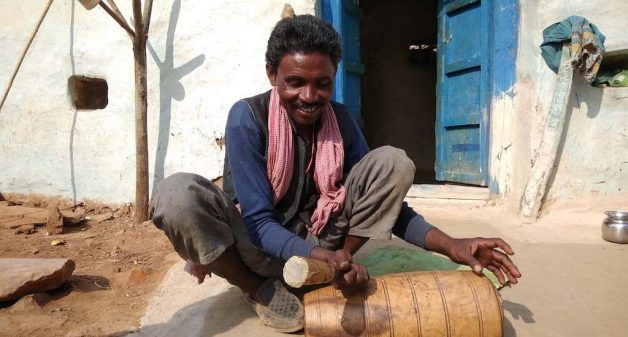 Prem Das is a Raj Gond of Majholi village, where no one cultivates millets today (Photo by Saurav Verma)

Tiwari’s grandfather divided the land among his sons and they among their offspring. Over time the landholdings have become smaller and practicing shifting cultivation has become difficult.

In addition to smaller landholdings, shifting cultivation has become impossible because of restrictions under Wildlife Protection Act. Previously the tribes cultivated crops on any patch of forestland they found available, which they can’t do now.

The tribal villages are mainly situated in the buffer zone of Panna Tiger Reserve and the tribes’ livelihood depends on the forest for millennia. Restrictions in the use of forestland for agriculture by the forest department have increased over the past decade. Restrictions and discontinuing shifting cultivation meant giving up millet cultivation.

“Rotis made of kodo are very nutritious. Kutki grains, tiny and white, are tasty too. The older the grain, the tastier it is. It can be stored for many years without any treatment unlike wheat and rice,” said Tiwari.

High in nutrition, kodo and kutki are gluten-free and non-acid forming foods. These are considered to be the least allergenic and most digestible grains available. They are high in minerals like iron, magnesium, phosphorous and potassium; hence they will help combat malnourishment in the region.

Iron and phosphorous content of these cereals are higher than in rice and wheat and hence is best suited to tackle iron deficiency in women and children. Anemia among women is very high in this region. The elimination of these millets from their diet could be one of the reasons for increasing anemia and other micronutrient deficiencies.

According to Pradeep Yadav, earlier they never used fertilizers. “Monsoons were regular back then. With the present uncertainty in rain pattern, irrigation is necessary, which will add to the input cost,” said Paramlal Adivasi (60) of Gahadara village.

Use of farm machinery for ploughing, irrigation and harvesting has increased input costs. The price of millets in the market is less than that of wheat and rice. There is also a ready market for rice and wheat since government supplies them through public distribution (PDS), but not in the case of kodo and kutki. With high input cost and low market price, the farmers incur losses.

“Over the years, the input cost started increasing and market value for kodo and kutki decreased. There was no profit in growing them. Farmers started growing wheat, pulses and mustard based on market demand,” said Shankar Paroha (50) of Gahadra village.

These millets were grown with traditional seeds. Since cultivation has severely declined, people have lost the seeds, which again reflects in the meager cultivation. 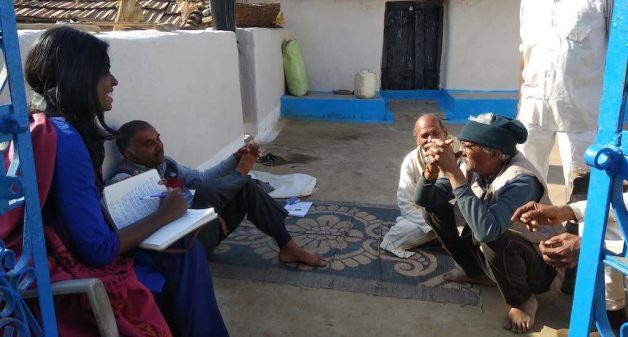 Bhure Singh Adivasi (40) of Koni village has a different reason for the decline in millet cultivation. “Having lost the habit of eating kodo regularly, we feel dizzy if we eat it now; because of that we have stopped eating and hence growing it.”

Prem Das (48) of Majholi also said, “Once our village realized that everyone felt dizzy after eating kodo, we became afraid. After that many of us stopped cultivating it.”

According to Babu Lal of Majholi, millet crops are tall and the crop heads are not easily visible. After wild animals lower the ripe heads and eat them, the crops would straighten again. “So, the loss was visible only during harvesting, whereas with wheat, mustard and other short crops, attacks can be detected and corrective measures taken immediately,” he said.

“Children of today’s generation don’t even know about millet rotis as they have acquired the taste for wheat roti,” said Ram Suresh Singh (30) of Majholi.

Singh said that kodo and kutki were best for their weather conditions, and was drought-resistant. “It came with lots of nutritional benefits and that is why our forefathers were so healthy and strong.”

Women are seen doing strenuous work. Bringing water for the family from 2-4 km every day, collecting and carrying firewood on their head and walking upto 20km to sell it are their regular works that requires nutritious diet. Their physical constituency was adjusted to kodo and kutki, giving them the required nutrients, which rice and wheat fail to provide.

Its non-glutinous property also helps in fighting obesity and diabetes. To promote millets, National Food Security Mission has introduced a sub-mission on nutri-cereals that includes kodo and kutki.

Paramlal Adivasi (60) of Gahadara village said that de-husking the crops is labor-intensive, especially for the women, and that could be one of the reasons for the decline.

Cultivation of other millets like jundi and bajra are also diminishing and people in the area are shifting towards commercial crops. Seeing the current water crisis and the consecutive droughts in Bundelkhand, water might soon become scarce.

Wheat, rice and pulses need plenty of water. With predicted shortage in the coming years, cultivation of these mainstream crops will no longer be feasible for the farmers, specially the marginalized. Those who can afford it will pay a high price for it. In such a scenario, millets will be sustainable and climate resilient.

As millets don’t require additional fertilizers, the input cost will be reduced. It will also help in regaining the lost soil fertility.

The current problem is that there is no network to sell it directly to the buyer and incur maximum profit. Millets can be included in the PDS, which will give farmers an incentive to cultivate them, as PDS will ensure a market to sell their produce easily.

The dietary pattern, which has changed over the years, in which PDS played a major role, can now be reversed. PDS can help in its revival by distributing specific millets of the specific areas.

Authentic and quality seeds, which are not easily available, can be restored so that farmers can buy seeds from community seed banks, government seed distribution system and local markets. Restoration of water tanks, wells, lakes and streams will be a boon for the farmers.

Civil society and government machinery can promote millets, through awareness programs about the importance and advantages of growing them. Incentivizing farmers to grow millets and then connecting them to global commercial markets could also lead to restoration of millet cultivation.

Saurav Verma is an engineering graduate and an India Fellow. Views are personal.