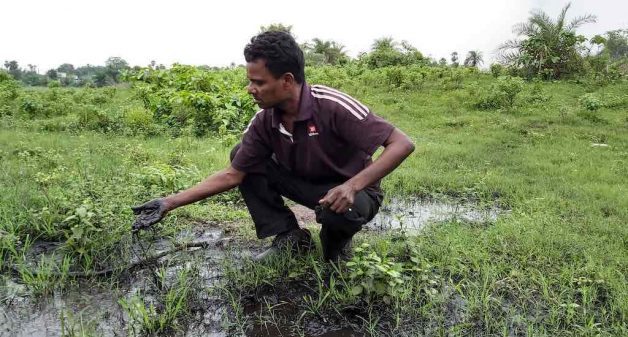 Talcher in Odisha is known for its rich repository of coalmines, coal washeries and other related industries. Considered as one of the fastest growing mineral hubs of the state, the region has earned the epithet Coal city of Odisha. However, with rapid industrialization and its increased economic contribution to the state, the impact of mining and other mushrooming industries are evident.

Flouting of prescribed rules on waste management by the erring industries are now taking a toll on the lives of villagers living in the periphery of the industrial hub. Due to discharge of untreated industrial effluents, people living around these extractive industries have lost their livelihood and health while the threat looms large at the future generation too.

Many small drains were seen discharging toxic industrial effluents in civilian areas including agricultural lands, common plains, nearby ponds, most of them beyond the boundary walls of the industries.

“Earlier I had agricultural land of more than 1 acre, where I used to grow rice and made profit by selling it in the market. But the unregulated toxic wastes from the coal washery nearby flow into my farmland and totally destroyed its fertility and made it barren,” Kirodh Das, a resident of Tentulei village near Talcher, told VillageSquare.in.

Das showed how the black toxic wastewater coming from the coal washeries seep into several places in his village and nearby villages. The toxic chemical rich water not only seemed to ruin the farmlands of Talcher villagers but also contaminated many water bodies nearby.

A family of four living near the banks of one of the ponds in the village showed the black toxic water from the nearby industries getting into the pond and making it unfit for bathing and other uses. They took the pond water in a bowl to show the pollutants and industrial slurry going directly into the village lands and their water bodies. 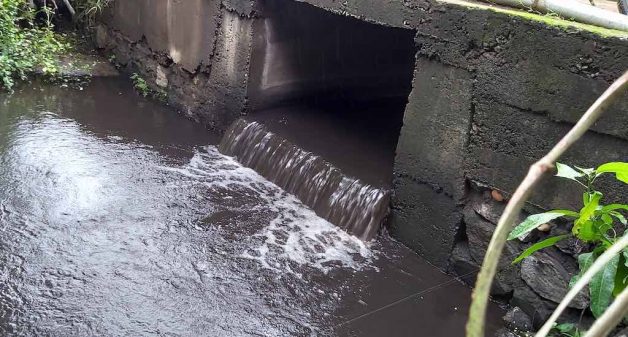 “The fish and other aquatic animals are also not able to live in this pond due to the toxicity. Many drains containing the harmful polluted waters are getting directly into the water bodies in our village. Due to the levels of pollution in the surface water, our drinking water woes have escalated in the past few years,” said of the villagers, requesting anonymity.

Rita Rani Das, the former sarpanch of this village, said that the water pollution and the rampant air pollution in the villages close to the extractive and coal processing plants have taken a toll on the health of the people.

Tentulei, Bada Danda Sahi, Baghamara, and Diajharan are among the villages affected by the rampant water and air pollution. Hand pumps are also discharging heavily contaminated water not fit for human consumption. Diarrhea and other water-borne disease among the kids are also prevalent in good numbers in such areas.

A study conducted by Rabindra Kumar Sen of Indira Gandhi Institute of Technology (IGIT), Sarang, cited that the incidences of white spots in human bodies, incurable skin infection and dead skin lumps are on the rise among the population of Talcher due to rampant pollution in this area.

Not only the coal washeries in these areas, but the perennial flow of coals in truckloads on the Talcher roads, its deposition on the peripheral areas, the wastes emanating from the industries are choking the residents of nearby villages.

Villagers said that the drifting coal ash often engulfs the houses, trees, roads and water bodies with black layers of coal dusts, showing the extent of air pollution in the villages in the vicinity of such industrial areas and the threat it poses to people living there. 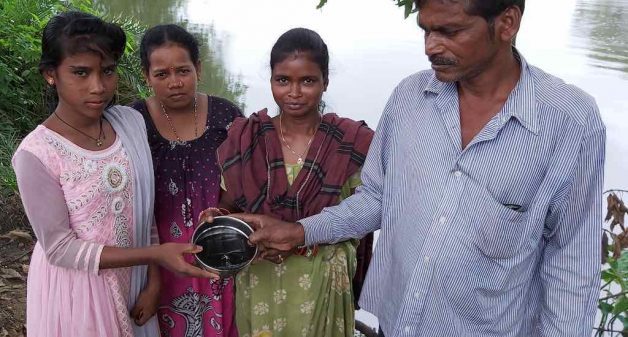 Studies have also proved that with the close vicinity of coal plants the higher particulate matter, namely PM 10 is likely to aggravate respiratory disorders in adjacent villages.

Experts opined that toxic industrial wastes entering agricultural fields are likely to destroy the prospects of standing crops. Bhubaneswar-based environmentalist SN Patro said, “Talcher is known for the rampant industrial pollution. Due to the toxic elements like Flouride, Nitrogen compounds, Sulphur and others they are likely to hit the standing crop and interfere with the soil fertility, besides playing havoc with public health,”

Apparently, the heavy industrial hub of Angul-Talcher now figures among one of the most polluted sites of the world. A study by Greenpeace revealed that Angul-Talcher tops the list in the world when it comes to emission of Nitrogen Dioxide (NO2).

The Central Pollution Control Board (CPCB) has already red-flagged Talcher for critical pollution levels. A study was earlier conducted by the Ministry of Environment and Forests. According to the report prepared by the ministry Talcher was among some of the most critically polluted areas of India due to coal mining.

Later, the CPCB developed a Comprehensive Environmental Pollution Index (CEPI). Environmental assessment based on CEPI claimed that three clusters in Odisha-Angul-Talcher, Jharsuguda and Ib valley were among the critically polluted regions of the country.

Kirodh Das said that sometimes after much pressure from the villagers, the industries stop draining into one site but start discharging to another site shortly, making the villagers’ efforts futile. The soils in such areas are seen to be black due to the heavy contamination of the surface, combined with the toxic water and air.

According to legal experts, such contravention of rules violates the norms of the Water (Prevention and Control of Pollution) Act, 1974, Environment Protection Act, 1986 and the Polluters Pay Principle. Moreover, the Environmental Clearance granted by the Ministry of Environment and Forests restrain the industries to refrain from discharging industrial pollutants in public areas and nearby water bodies. However the erring industrial bodies are running unabated by rampantly sidelining most of the legal provisions.