For most women in Bengal’s villages, a bath is a hurried dip in ponds while fully clothed to avoid the unwelcome male gaze. Community bathrooms enable them bathe in private and maintain better hygiene 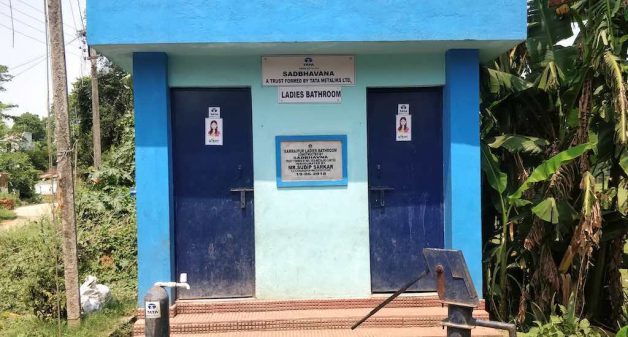 Aunima Mudi’s house is located right next to a teeming thoroughfare leading to a railway station. The 23-year-old fills water from a hand pump near this main road.

In Jogai village, Mudi and the other women used to bathe near this hand pump earlier. The hand pump was enclosed in a tarpaulin cover to provide privacy for the women to bathe. However, passersby using the main road would peek over the covering, snigger and pass sly comments.

To avoid the stares and comments, the women used to bathe with their clothes on and hurry back home in the same wet clothes. Due to the quick bath and wet clothes, women faced health problems like skin rashes, infections and poor menstrual hygiene, in addition to shame and discomfort. This is a common story of woe in India’s villages.

Built recently, community bathrooms are now helping the women of two villages in West Bengal bathe in comfort and privacy, resulting in better health and hygiene.

As a new bride, Mudi could not complain to her parents-in-law or her husband. “If all the women bathed in the open, I had to do the same without complaining,” she said. She was aware of the financial constraints of her family. There were other needs that were more important to the family, than a bathing space.

Building toilets may have found vigor because of the Swachh Bharat Abhiyan, but building a bathing space remains a much-ignored aspect in the national scheme as well as in the water, sanitation and hygiene (WASH) sector.

A bathing space provides privacy, safety, security and various health benefits to a woman. (Read about the high opportunity cost of personal hygiene, need for change in the mindset of men regarding secluded bathing spaces, plight of Odisha villagers bathing in the open and about piped water supply helping women bathe in private)

Bathing in the open

In Jogai, women had to bathe near the hand pumps that were also used for other purposes such as washing clothes and utensils, besides for filling drinking water. Often, to avoid the prying eyes of men, the women did the ablution hurriedly.

In a focus group discussion with 20 women in Samraipur, a village near Jogai, only one woman said that she had an enclosed bathing space in her house. The women bathed and sometimes disposed menstrual pads, in the village ponds where men also bathe.

The water in the ponds is unclean and covered with algae. While bathing, if a man came, the women would stop, wait for the man to finish his bath, and then resume their bathing. They had to bathe with their clothes on and often would only take a dip in the water and finish bathing.

None of these bathing spaces provided any sense of comfort and convenience to the women, and therefore, they could not clean themselves properly. Women felt ashamed that they had to bathe in such conditions but they had no other option.

As part of their CSR activities, Tata Metaliks constructed a community bathroom near the hand pump in Samraipur and Jogai. Community bathing spaces were preferred because of lack of space in the villages. 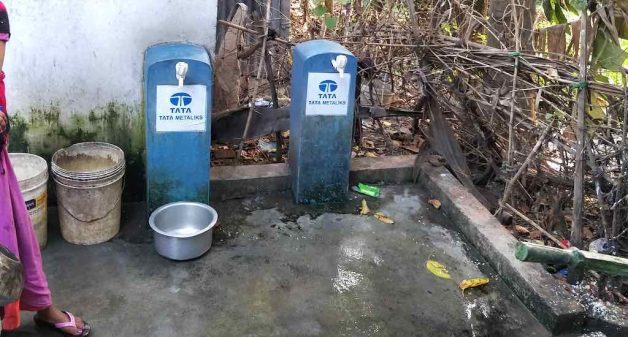 Samraipur has three blocks of two bathrooms each, and Jogai has a single room with two showerheads. The community bathrooms were constructed in two phases between 2017 and 2019.

The bathrooms are for the women. The walled enclosures have 24-hour water supply from the overhead tank, enabled by solar or electric pumps.

Each block of bathroom caters to about 15 households. The spaces are big enough for a woman to bathe small children comfortably if needed. The bathrooms have sturdy doors and are fitted with showers and fittings for hanging clothes and keeping toiletries.

The women follow unwritten rules such as not washing menstrual cloths within the bathroom, using the shower only for washing hair, and washing clothes outside near the community tap and not within the bathroom. These rules help keep the bathroom clean and also help manage the timings.

The women perceive changes in their lives by the comfort, privacy and convenience in bathing and in better health. Women said that they can now bathe with clean water and in privacy.

In these villages where traditionally women bathe more than once a day due to the humid climate, these bathrooms have changed the everyday life of women. They can bathe twice without having to go through the hassles of filling water. Women across age groups regularly use the bathrooms.

Due to regular bathing, cases of miliaria has reduced significantly. Other perceived health benefits are reduction in joint and back pain, which was earlier caused due to crouching, and reduction in infections caused due to bathing in unclean water.

Women could not maintain menstrual hygiene due to lack of privacy. They faced problems like itching near the genital areas, excess colored vaginal discharge, and a burning sensation during urination. The incidences and intensity of such problems have reduced significantly.

Due to water connection within the bathing space, the women felt that the discomfort experienced during menstruation has reduced as they can now bathe comfortably, and practice better menstrual hygiene.

Almost all the women interviewed were satisfied with the overall structure of the bathrooms. Some women complained that the overhead tank heated up during the afternoons and hence the water became very hot to use. They said that they have to carry water from the hand pump or bathe outside.

Availability of land is a big issue. Families belonging to the Scheduled Tribes own very little land. For ease of use, the sanitation structures should be located close to the houses as well as to the water source. However, no one is ready to give land for laying pipes or build bathrooms.

Often, the household in whose land the bathroom is built keeps one bathroom for their use. The bathrooms are locked for safety purpose and the keys are kept with the family that is the nearest. Women feel awkward approaching the houses to get the keys. This deters them from using the bathrooms.

Bathing was an unarticulated need of the women in the two villages. Many women had not seen and used an enclosed bathing space before. But now they enjoy the benefits of bathing in an enclosed space. The impact is such that women who do not have bathrooms in their part of the village are demanding the same.

Vaishnavi Pawar is a researcher at VikasAnvesh Foundation in Pune. Views are personal.