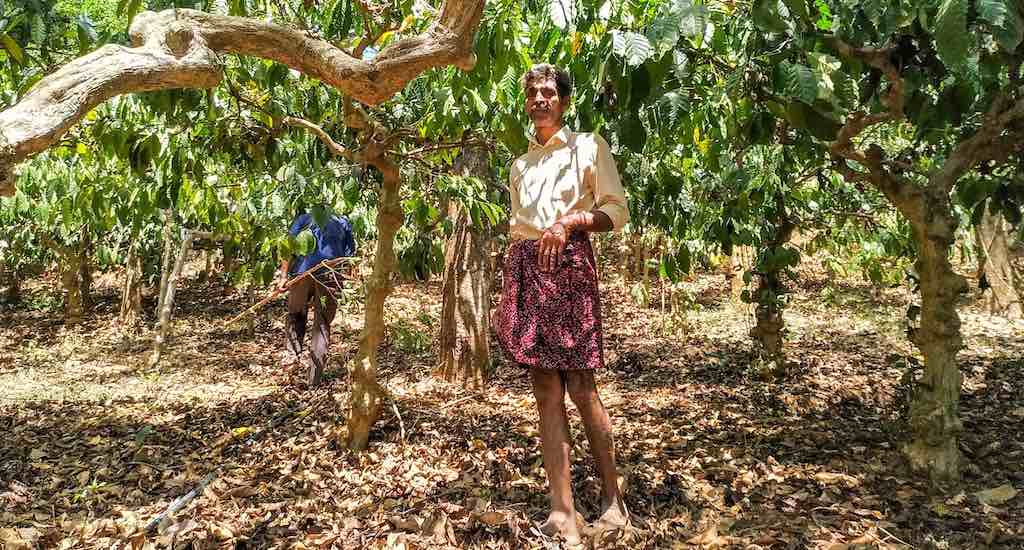 “By 4 p.m. we had to light a fire to stay warm here,” says Augustine Vadakil on his struggling farm in Kerala’s hilly Wayanad district. “But that was 30 years ago. Wayanad is no longer the cold, misty place it once was.” From a maximum of 25 degrees Celsius by early March, temperatures here now easily cross 30 degrees by that time of the year.

And the number of warmer days has more than doubled in Vadakil’s lifetime. In 1960, the year he was born, “the Wayanad area could expect about 29 days per year to reach at least 32 degrees [Celsius]” says a calculation from an interactive tool on climate and global warming posted online by the New York Times this July. “Today the Wayanad area can expect 59 days at or above 32 degrees per year, on average.”

The changing weather patterns, Vadakil says, hurt heat-sensitive and vulnerable crops like pepper and orange that were once abundant in this district in the Western Ghats at the southern tip of the Deccan Plateau.

Vadakil and his wife Valsa own a four-acre farm in Cherukottur village in Mananthavady taluk. His family left Kottayam around 80 years ago, to try their luck in the booming cash crop economy in Wayanad. That was a period of heavy migration that saw thousands of small and marginal farmers from central Kerala settle in this district in the north-eastern part of the state.

But over time, the boom seems to have gone bust. “If the rains prove to be erratic, like they have been in the last year, then the organic coffee (Robusta) we grow is doomed,” says Vadakil. “Coffee is profitable, but the weather is the biggest problem in its growth. Heat and erratic rainfall ruin it,” says Valsa. The ideal temperature to grow Robusta coffee is between 23 and 28 degrees Celsius, say those working in the sector.

All of Wayanad’s coffee, which is of the stronger-in-body Robusta family (a tropical evergreen shrub), is cultivated between December and late March. The coffee plant needs its first rain by late February or early March – and starts to flower a week later. It is crucial that there are no rains for a week after the first shower as that destroys the delicate flowers. The second shower is needed a week after the first one for the coffee fruit or ‘cherries’ to start growing.’ Once the flowers bloom and fall off the tree, the cherries that contain the beans begin to mature.

“Timely rains guarantee you an 85% yield,” says Vadakil. In early March, he was hoping for this outcome, but anxious if it would happen. It did not.

By early March, at the beginning of Kerala’s severe summer, temperatures had already gone up to 37 degrees. “The second shower came too soon this year and everything was destroyed,” Vadakil said at the end of March.

For Vadakil, who gives two acres to this crop, translated to losses of Rs. 70,000 this year. The Wayanad Social Service Society (WSSS), a cooperative that purchases coffee from local farmers, gives them Rs. 88 for one kilogram of unprocessed organic coffee, while non-organic fetches Rs. 65.

From 55,525 tons in 2017-2018, coffee production in Wayanad plummeted by 40% this year, Father John Choorapuzhayil, a director at the WSSS, said over the phone. There is no official figure out, yet. “This fall in production is largely because changes in climate have proved the biggest threat to coffee growing in Wayanad,” says Fr. Choorapuzhayil. Across the district, farmers we met spoke of the wild variations in yields from both excess rainfall – and sometimes the lack of it – in different years.

Fluctuating rainfall leaves the fields water-starved. “Only 10% of Wayanad’s farmers,” estimates Fr. John, “can work around drought or erratic rainfall with irrigation facilities like borewells and pumps.” 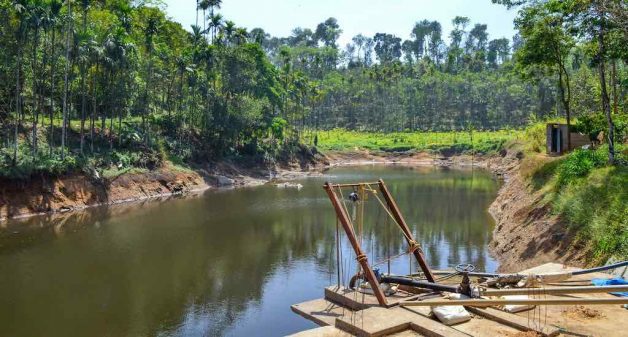 Large coffee estates can afford to dig ponds and install pumps when rainfall is low, but smaller farms have to depend entirely on rain or inadequate wells (Photo by Vishaka George)

Vadakil isn’t among the lucky few. His irrigation pump was damaged during the floods that ravaged Wayanad and other parts of Kerala in August 2018. The Rs. 15,000 it would cost him to repair it is too large a sum in such trying times.

On his remaining two acres, Vadakil and Valsa grow rubber, pepper, bananas, paddy and areca nut. The growing heat, however, has begun to affect all these crops as well. “About 15 years ago, pepper was all we needed to survive. But [since then] diseases like Dhruthavaattam (Quick Wilt) have destroyed acres of it across the district.”  Since pepper is a perennial crop, the farmers’ losses have been devastating.

“As time passes, it seems like the only reason to farm is if it is a hobby. I have all this land, but look at my situation,” Vadakil says. “All you can do in these times is grind some extra chilli because that’s about all you can afford to eat with rice. It began 15 years ago. Why is the kalavastha changing like this?”

Interestingly, the Malayalam word kalavastha means climate, not temperature or weather. We were asked this question many times by farmers across Wayanad. Sadly, a part of the answer lies in the cultivation patterns adopted by farmers over the decades.

“We say that it is healthy for multiple crops to be growing on each patch of farmland as opposed to the mono-cropping culture that now exists,” says Suma T. R.  A scientist at the M. S. Swaminathan Research Foundation, Wayanad, Suma has worked for over 10 years on land-use change issues. Mono-cropping drives the spread of pests and diseases, which are then treated with chemical pesticides and fertilizers. These make their way into groundwater or become airborne, causing contamination and pollution – and severe environmental damage over time.

It began, says Suma, with the deforestation unleashed by the British. “They cleared the forests for timber and converted many high elevation mountains into plantations.” The alteration in climate is also linked, she adds, to “how our landscape too changed with large-scale migration (into the district starting from the 1940s). Prior to this, farmers in Wayanad primarily practiced shifting cultivation.”

In those decades, the major crop here was wetland paddy, not coffee or pepper – even the word ‘wayanad’ comes from ‘vayal nadu’ or land of paddy fields. Those fields were vital to this region’s – and Kerala’s – environment and ecological systems. But the area under paddy – around 40,000 hectares in 1960 – is down to barely 8,000 hectares today. That, according to government data for 2017-18, accounts for less than 5% of the district’s gross cropped area.  And coffee plantations now cover nearly 68,000 hectares in Wayanad. That’s 79% of the total coffee area in Kerala – and 36% more than all Robusta acreage in the entire country in 1960.

“Farmers were cultivating crops like ragi on hillocks,” says Suma, instead of clearing the land for cash crops. Farmlands were able to sustain the ecosystem. But with growing migrations, she adds, cash crops took precedence over food crops. And with globalization’s arrival in the 1990s, even more people started to depend completely on cash crops like pepper.

“Today, farmers make Rs. 12 for one kilogram of paddy and Rs. 67 for coffee. Pepper, however, fetches them between Rs. 360 and Rs. 365 a kilogram,” says E. J. Jose, a former project officer at WSSS, and an organic farmer in Mananthavady town. That huge price difference pushes even more farmers to abandon paddy and opt for pepper or coffee. “Everyone is now growing what is most profitable, not what is needed. We are losing paddy too, a crop that helps absorb water when it rains, and restores the water tables.”

Many paddy fields in the state have also been turned into prime real estate plots, reducing workdays for farmers skilled in cultivating that crop.

“All these changes have a continuing effect on Wayanad’s landscape,” says Suma. “The soil has been exploited through mono-cropping. A growing population (less than 100,000 till Census 1931 to 817,420 by Census 2011) and land fragmentation come with it, so it’s no wonder Wayanad is getting hotter.”

Jose too believes that these changing farming practices are closely tied to the rise in temperatures. “The change in agriculture patterns has influenced changes in rainfall,” he says.

In nearby Thavinhal panchayat, 70-year-old M. J. George, who owns a 12-acre farm, says, “These fields were once so full of pepper, it was hard for light to pass through the trees. We’ve lost tons of pepper in the past few years. Changing climatic conditions are causing diseases like Quick Wilt.”

Caused by the fungus phytophthora, Quick Wilt has eaten into the livelihoods of thousands across the district. It thrives in conditions of high humidity which have “significantly increased in Wayanad over the last 10 years,” says Jose. “The rains now are irregular. The increasing use of chemical fertilizers has also helped the disease to proliferate, steadily killing the good bacteria called trichoderma that helped combat the fungus.”

“Earlier we had air-conditioned climate in Wayanad, but not anymore,” says George. “Rainfall, consistent throughout seasons earlier, has significantly decreased in the last 15 years. Wayanad was famous for the rainfall.”

The India Meteorological Department, Thiruvananthapuram, says rainfall in Wayanad between June 1 and July 28, 2019, was 54% below the normal average for the period.

“The inter-annual variability of rainfall has changed in recent decades, most conspicuously from the 1980s, and accelerating in the ’90s,” says Gopakumar Cholayil, scientific officer at the Academy of Climate Change Education and Research of the Kerala Agricultural University, Thrissur. “And the incidence of extreme rainfall events in both monsoon and post-monsoon periods has risen across Kerala. Wayanad is no exception to this trend.”

That, in fact, confirms the observations by Vadakil, George and other farmers. Even when they mourn the ‘decrease’ – and the long-term averages do suggest a decline – they mean the rain is much less on the days and seasons they need and expect it. That can happen in years of high as well as low rainfall. The number of days over which the rain is spread has fallen, while its intensity has risen. Wayanad could still have downpours in August-September, though July is the main month for the monsoon here. (And on July 29, the IMD issued an ‘orange alert’ warning of ‘heavy’ to ‘very heavy’ rainfall in this and a couple of other districts.)

“Changes in cropping patterns, erosion of forest cover, forms of land use – all these, among other factors, have had a serious impact on the ecosystem,” says Dr. Cholayil.

“With last year’s floods, all my coffee crops were lost. We had the least amount of coffee production this year across Wayanad,” says Subadhra Balakrishnan of Mananthavady. The 75-year-old farmer oversees cultivation on her family’s 24 acres in Edavaka panchayat and grows coffee, paddy and coconut, among other crops. “Many coffee farmers of Wayanad are now increasingly dependent on their cattle for an income.”

The author thanks researcher Noel Benno for his help.

Vishaka George is a journalist based in Bengaluru. Views are personal.

This was first published in People’s Archive of Rural India.