Women of Odisha’s forest-dwelling tribes face a greater health risk because of their preference for childbirth at home. Counseling by health workers is now slowly helping new mothers get better postnatal care

Jeerabai Bhunjia’s mother-in-law holds her grandchild to perform a ritual. Tribal customs is one of the reasons for women returning home immediately after delivery (Photo by Rakhi Ghosh)

In April this year, Jeerabai Bhunjia developed labor pain. Her family took her to the Nuapada district hospital, where she delivered a son. When her family wanted to take the mother and newborn to their village right after delivery, they were counseled about the likely complications, and the need for postnatal care at the hospital for the next 48 hours.

“Jeerabai and her husband Ramesh agreed to stay back. But many return home after normal delivery, though we insist that they stay at the hospital for 48 hours,” said Deepika Hota, a health assistant of a maternity home at Khariar in Nuapada. “They return home citing various reasons.”

Jeerabai is a Chakatia Bhunjia tribal woman of Bhausil village under Maraguda panchayat inside Sunabeda Wildlife Sanctuary of Odisha’s Nuapada district. There are many from her tribe in the area who prefer to have children born at home.

Deepika Hota and Raimati Majhi, accredited social health activists (ASHA) of Bhausil village, counsel the tribal women about proper diet and rest during pregnancy, institutional delivery, breastfeeding, spacing between children, maternity homes and postnatal care for the mother and newborn at the Village Health Nutrition Day (VHND) held every month inside the sanctuary.

Though young women like Jeerabai Bhunjia opt for institutional delivery, they prefer to return home immediately after the delivery due to various cultural practices, social norms, dietary practices and financial constraints. With the help of a mobile application, and better-equipping of ASHAs, postnatal care is being improved.

Chakatia Bhunjia is one of the tribes residing inside Sunabeda Wildlife Sanctuary. They have childbirth mainly at home. No one prefers going to a hospital for delivery. An older woman from their community handles the deliveries, bathes the child and serves food to the mother for 21 days after childbirth. 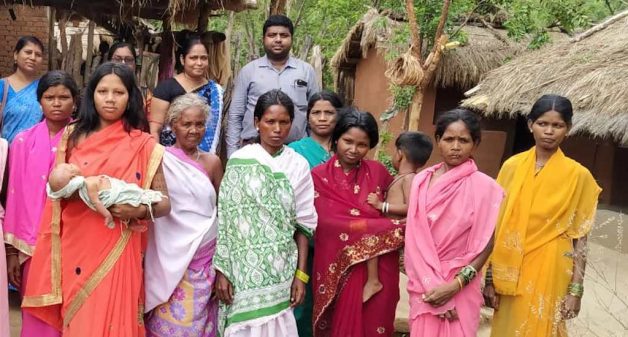 Surrounded by family, Jeerabai Bhunjia and her newborn are seen waiting to enter her house after a ritual that involves tonsuring the baby’s head (Photo by Rakhi Ghosh)

“Though some tribal women prefer institutional delivery these days, there are some cultural issues that deter them to stay for 48 hours in the hospital,” said Haridas Patel, secretary of Youth for Action and Research, a non-profit organization.

On returning to the village after childbirth, the mother and newborn are made to sleep on the verandah for six days. “They are allowed to enter the house only after completing a ritual of tonsuring the newborn’s head,” said Patel. “Also, the mother is not allowed to cook for 21 days.”

“She can’t enter the lal bangla (kitchen) as it’s the most precious space for this community. They attach so much sanctity that they set fire and destroy their kitchen if an outsider enters,” Patel, who has researched maternal health issues of Nuapada women including Chakatia Bhunjia tribes, told VillageSquare.in.

“Chakatia Bhunjias do not like eating outside their homes,” said Gouranga Mohapatra, national joint convener of Jana Swasthya Abhijan.

In Odisha, there are 377 Community Health Centers (CHCs) in which the total number of beds is 5,817; there is an additional requirement of 5,493 beds. It is a common sight in most of the CHCs to see mothers lying on the floor with their newborns.

There is also a shortage of doctors. There are only 124 gynecologists, although the government has sanctioned 382 such specialist posts for CHCs. Similarly, 53 pediatricians, 37 general physicians, 39 surgeons and 55 radiographers have been appointed in CHCs, but the requirement is much more. Besides, there is a huge shortfall of paramedics, pharmacists and nurses.

“While mothers from poor tribal and Dalit communities are unable to afford a stay for two days, the hospitals are not equipped to serve the poor,” Mohapatra told VillageSquare.in. “Shortage of doctors and other staff, poor maintenance of postnatal care (PNC) wards, absence of waiting halls for attendants and limited number of beds deter them to stay for 48 hours.” 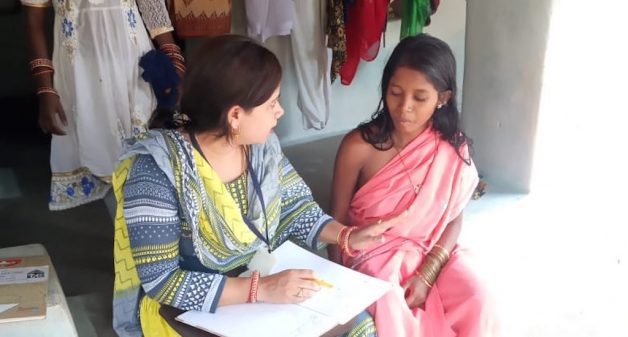 As per a study on women availing PNC services, women who give birth in hospitals utilize postnatal care (PNC) more than those who deliver at home. Also, mothers from lower socioeconomic status (SES) receive less PNC. The study showed that the use of PNC service by SES communities was 8.7 times lesser.

PNC has been low in India, leading to the risk of morbidity for mothers and babies. Mohapatra said that lack of care and treatment after childbirth also contributes to maternal deaths in the state. In Odisha, infant and child mortality rate is 40 per 1,000 live births.

In Nuapada district, primary health centers (PHCs) do not have a PNC ward; the ones in CHCs lie vacant most of the time, as mothers prefer to return the same day of delivery. “We have a PNC ward, but if the number of deliveries is high, it becomes difficult for us to accommodate all the mothers,” a doctor at a CHC told VillageSquare.in.

The CHC at Komna block that records 50 deliveries a month has a PNC ward. But due to shortage of doctors and staff, in addition to high number of deliveries, mothers and newborns are discharged after delivery. “The nurse asked me to leave two-and-a-half hours after delivery, saying that I had a normal delivery,” said a mother who had been discharged from a CHC.

Some women said that doctors and nurses do not visit the ward and check the newborn. The illiterate mothers are also not counseled about childcare and immunization. “Once the delivery is over, we are asked to go home,” alleged a few family members.

Why PNC is important

According to experts, postnatal care is a neglected domain. PNC is equally crucial for a pregnant woman, and to reduce the burden of maternal mortality rate, counseling and care has to be given during the postnatal period.

In Odisha, infant and child mortality rate is 40 per 1,000 live births. The National Family Health Survey – 4 (NFHS4) data reveals that only 73.3% mothers received PNC in Odisha and 29.5% children received health check-up from health professionals within two days of delivery.

“It was also found doctors at CHC refer high risk mothers to referral or district hospitals, but patients prefer to go back home due to financial constraint; sometimes that aggravates their condition and turns fatal,” said Mohapatra.

Save the Children, an NGO, and National Health Mission (NHM) conducted a study on quality of PNC in Nuapada district in 2017. The key innovation after the study is the use of mobile-based technology, named First 42 days, to strengthen linkages between pre-discharge and post-discharge PNC.

“We found there was a gap between the facility and community regarding PNC, and the ASHAs who visit homes are not informed about the risks to the mother and newborn,” Rashid Ahmed Khan of Save the Children, told VillageSquare.in.

To address this, a high-risk screening provision has been introduced in pre-discharge time. And ASHAs are informed about the risks. “The app helps families connect with their designated community health workers and helps the latter keep tabs on the health status of the mother and the newborn baby at the time of discharge,” said Khan.