There is an urgent need for better conservation of Amrit Mahal, a draughty, native breed of Karnataka that can toil and endure for long hours at a stretch, but have been dwindling in numbers 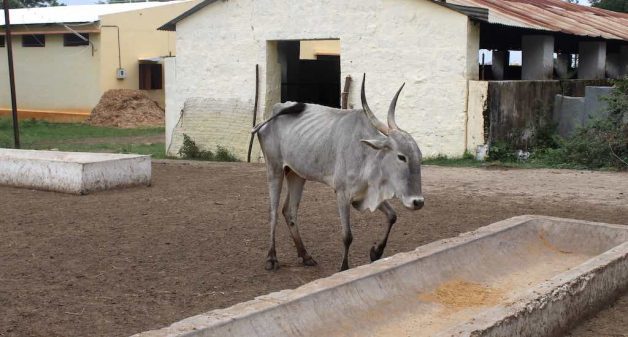 Tippeswamy has spent most of his adult life tending to Amrit Mahal calves at the breeding center in Ajjampura, a small town in Tarikere taluk in Chikkamagaluru district of Karnataka. The center has been taking efforts to conserve Amrit Mahal, a draught breed of cattle, native to the southern parts of Karnataka.

Known as Benne Chawadi earlier, the muscular Amrit Mahal cattle are believed to have originated from the Hallikar breed, which was cross-bred with Hagalavadi and Chithradurg breeds.

Despite the efforts at the breeding center and its sub-centers, the number of Amrit Mahal cattle has been steadily declining and its characteristics changing due to lack of upkeep. Concerned citizens seek government support and intervention to reverse the situation.

Historically, Amrit Mahal was the only breed that enjoyed royal patronage from Vijayanagara kings to the Sultans and Wodeyers of Mysore. From 1617 to 1704, several Wodeyer kings supported the development of these cattle by assigning designated semi-arid grasslands called kavals across the state, as grazing land.

After the reign of Wodeyers, the legacy continued under Haider Ali, the first ruler to have used this breed in warfare. His son Tipu Sultan organized the stocks into gun, pack and plough bullocks. He renamed the cattle as Amrit Mahal and issued hukamnama (regulations under royal decree) for their upkeep.

After the death of Tipu Sultan in the fourth Anglo-Mysore War of 1799, the Amrit Mahal troops and the department fell into the hands of the British, eventually leading to loss of patronage.

According to Tippeswamy, the most striking features of the Amrit Mahal breed are its strength and sensitivity. “Once fed, they can walk continuously, toil and endure for long hours at a stretch,” he told VillageSquare.in. “However, they are shy and secretive when it comes to delivering their calves.”

Noting Amrit Mahal’s tolerance to drought like conditions and their contribution in military transport, a Professor Wallace was quoted in a 1895 book on the cattle of Mysore, comparing the form, temper and endurance to a thoroughbred horse.

Established in 1929, the Amrit Mahal Cattle Breeding and Training Center in Ajjampura now houses 338 Amrit Mahal cattle. There are over 2,000 Amrit Mahal cows and buffaloes being sheltered in the 8 sub-centers under the administrative limits of Ajjampura center. Each of the cattle is numbered for easy identification.

“The center mostly nurtures cows and sells buffaloes over two years for agricultural activities in a public auction every year, with the highest bids going over Rs 1.5 lakh,” Kaleshappa (48), veterinary inspector at the Ajjampura center, told VillageSquare.in. “We restrain from selling cows to prevent breeding of hybrids that would compromise on the originality of the breed.”

Tippeswamy recalled a time in the 1970-80s, when the breeding center employed close to 120 workers for maintenance of the cattle. The labor-intensive activities included giving a special feed to the cattle, overseeing their grazing, clearing cow dung, etc.

Today, the center has less than 20 people. The main reason for the center being understaffed is monthly paid laborers (MPL) replaced by outsourced workers. “The tenders are called at high level meetings in Bengaluru and the contractors who get the tenders are least interested in conservation,” said Tippeswamy.

Shivanand. S (59), with the support of Janadani, an NGO, has mobilized people in and around Ajjampura to press for greater governmental concern and accountability in conserving the breed. “Most of these outsourced contract laborers are overworked and do not receive governmental benefits,” he told VillageSquare.in. “Absenteeism makes things worse”.

The sprawling 794-acre Amrit Mahal cattle breeding and training center on the outskirts of Ajjamura has green pastures, a huge lake and, tracts of cultivated African maize and sorghum crops. However, with ramshackle cattle sheds, abandoned feeding pits and rampant growth of invasive weeds, maintenance is found to be wanting.

A weighing machine imported from Britain lies in shambles covered by plant outgrowth. The prickly honey mesquite is quite widespread in the premises. “These thorny bushes are no obstructions for the formidable Amrit Mahal. They charge through easily,” said Kaleshappa.

Women workers digging dried up cow dung from the mud floor of the shelters is a common sight. “Last October, a newborn calf died by suffocating in the long accumulated pile of gobar,” said Shivanand. Tippeswamy said that decisions were being taken without thorough field visits.

Officials at the center said that increasing the number of workers and grants to improve the infrastructure, especially providing rain-proof sheds, could be big steps towards enhanced conservation efforts of Amrit Mahal breed.

Lack of proper care over the years has led to changes in the characteristics of the breed, including poor milk quality. “15 years ago, everybody who grew up in Ajjampura drank fresh, protein-rich milk of Amrit Mahal cows each morning. Today children don’t know the real taste and essence of that high quality milk,” said Shivanand.

“Earlier, a newborn calf weighed about 20-23 kg. But now that has reduced to about 8-10 kg. The number of new births has almost halved in the past decade,” said Tippeswamy.

At the time of independence, Karnataka had about 4 lakh acres of kavals spread over the southern districts of Chikkamagaluru, Chitradurga, Davangere, Tumkur, Hassan and Mandya. Today, all that remains with the Animal Husbandry Department is about 60,000 acres of kaval land, out which over 20,000 acres is alleged to be encroached.

“Encroachment is a norm in almost all breeding centers and sub-centers,” said Tippeswamy. Though many instances of land grabbing, mismanagement and conversion of kavals have been reported in the recent past, little has changed for the better.

In Basur sub-center, guards who were permitted to grow ragi, maize and hay for cattle feed were reprimanded for indulging in large-scale cultivation of cash crops.

In Challakere of Chitraduraga district, huge swathes of the Amrit Mahal kaval that critically supports the sustenance and livelihoods of many pastoral communities was diverted by the government for various defense projects by Indian Space Research Organization (ISRO), Defense Research and Development Organization (DRDO) and Bhabha Atomic Research Center (BARC).

In 2008, the state government headed by B.S. Yediyurappa had mulled over an attempt to transfer the maintenance of Amrit Mahal to Ramachandrapura Mutt. “It was the advocacy efforts of various village groups that stopped commercialization of conservation efforts,” said Shivanand.

Apart from affecting the grazing activities of Amrit Mahal, rapid depletion of these sensitive grasslands also present an imminent threat to the survival of critically endangered species like the Great Indian Bustard, Lesser Florican and other fauna.

Local residents said that the authorities concerned have no dearth of funds, cattle feed or resources. “No other governmental department has such extent of ecologically rich land in Karnataka,” said Shivanand. “Also, the sale of Amrit Mahal buffaloes brings revenue in crores of rupees. Still, it is sad that we get to hear of Amrit Mahal deaths due to starvation and negligence.”

“We need government officials who are sensitive to this pressing issue to be posted at the breeding centers. They need to put aside their self-interests, prevent laundering of funds and implement conservation measures,” said Shivanand, reiterating the demands of their civic movement.

Many people are urging the government to establish a separate authority headed by an IAS officer, to oversee the preservation of Amrit Mahal cows. “We have submitted a memorandum in this regard which is yet to be deliberated upon in the cabinet,” said Shivanand.

On the importance of conserving Amrit Mahal, “It is the most superior and enduring breed of cattle ever. It can walk tirelessly up to 12 hours, is hard working and has served people in Karnataka for centuries. They definitely deserve better,” Tippeswamy told VillageSquare.in.