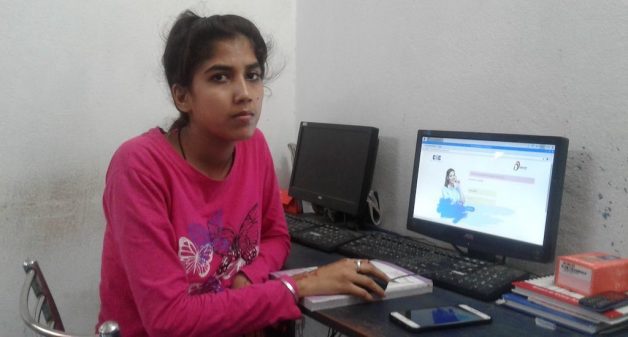 Chandni Kumari, in her early 20s, never imagined that she would work on computers and earn Rs 3,500 a month without stepping out of her native village. Most of the residents of Alawalpur village under Fatuha administrative block in Patna district, too, found it hard to believe when she and a few girls joined the rural business process outsourcing (BPO) center nearly two years ago.

Chandni is one of 10 girls, all residents of Alawalpur, and pursuing undergraduate courses in nearby colleges, who are now working in the BPO center in their village. The center operates in a rented two-room house of about 200 sq. ft.

The village is surrounded by paddy fields. With 10 desktop computers, the BPO center, with a lawn and a glass door, the only one of its kind in the village, looks different in the surroundings.

BPO centers, started in Alawalpur and other villages with digital connectivity under the government’s digital village scheme, help young girls with computer operating skills get employment within their village and give them social and financial empowerment.

“Nearly four-and-a-half years ago, I got an opportunity to learn computer skills free of cost at Adarsh Computer Sakhsharta Kendra of National Institute of Electronic and Information Technology run under a central government scheme in the village,” Chandni told VillageSquare.in.

“I never thought that getting trained in operating a computer would help me get a job, but thanks to this BPO, I am able to work in my village and earn,” said Chandni, clad in a pair of jeans and T-shirt, an unusual dress for a young girl of the village.

Priyanka Kumari, a teenaged girl, said, “Initially my parents as well as the other villagers thought that a free course in computer operation would be of no use because no one imagined that a facility would come up in the village where local girls could get jobs.”

The girls who are working in the Alawalpur BPO center and presently entering data of beneficiaries of Rural Digital Literacy Campaign said that they were paid one fourth of what girls working in BPO centers in Patna or other cities were earning. “We are paid less since we are working in a rural BPO,” Joyti Kumar told VillageSquare.in.

However, Deepak Kumar Singh, whose Common Service Center (CSC) runs the BPO in Alawalpur, said that it was a positive thing for the girls to be working within the boundaries of the village after completing a certificate course in computer operation.

“They may not be getting more money as in the cities, but it is a good start in the village. They do not have to spend on food, conveyance and rent to stay as in a town,” Singh, a young entrepreneur,  told VillageSquare.in.

Singh recalled the skepticism of the villagers when they started operations and hence sees the girls’ working as a positive development. Still most of the people in this village have little idea about how a rural BPO center functions. They just say that the girls are working on computers.

When the center was started, the villagers were doubtful that the girls had the talent and computer skills to carry out the work. “Some parents did not allow their daughters to join our BPO center, but our confidence building communication paid off and girls were allowed to work,” said Singh.

Sitting in front of a computer in the BPO center in this dusty village dominated by conservative males from the powerful upper caste, who have strong reservation of girls working outside their own house, the girls are examples of women’s empowerment.

Chandni and Priyanka pursue a part-time undergraduate course that offer them flexibility with their classes. At the BPO, they do 8-hour shifts, except on Sundays and public holidays.  “We have empowered
ourselves, gaining experience and exposure despite living in a village, a rare thing for us,” said Chandni.

“A functional BPO in the village is an example that it can do wonders in rural areas for girls like us, who also dream to move ahead in life” Priyanka told VillageSquare.in. Since inception, more than 20 girls have worked in the Alawalpur BPO center.

Some of them like Neha Shukhla have joined a private company in Patna on the basis of their experience at their village BPO center. Two girls who moved from the village to other states after marriage are working in private firms. “My experience here will pave way for better job opportunity in towns,” said Chandni.

“Digital villages are providing opportunities for women and girls at their doorstep to empower themselves,” Deepak Singh’s wife Lovely Singh, who works as supervisor in the Alawalpur BPO center, and who shares a close rapport with the girls working there, told VillageSquare.in.

“Computer training proved fruitful for the girls as there’s an increase in demand for work,” said Deepak Singh. He said that about 1,500 girls belonging to Alawalpur and neighboring villages have been trained in how to operate a computer.

Vinay Singh, who runs a CSC in neighboring Daultpur village, is a frequent visitor to the Alawalpur BPO center. He said that the girls had gained confidence and computer skills since they joined. “The work has given them an opportunity to face the world and they are no longer shy or nervous to talk to visitors,” Vinay Singh told VillageSquare.in.

Deepak Singh said that 10 girls trained in Alawalpur are working in a BPO in Sonagopalpur village under Sampatchak block in Patna district. “In my village, over a dozen girls are getting computer training and they are keen to start work when a BPO on the lines of Alawalpur is set up in my village,” he said.

Priyanka said that their computer training, work and financial empowerment have inspired many villagers to educate their daughters. “By working in this BPO center, we have become role models,” she said.