With rigid traditions and customs such as not eating food cooked by other communities, the Thottinayakar community in Tamil Nadu is lagging in social, educational and economic development 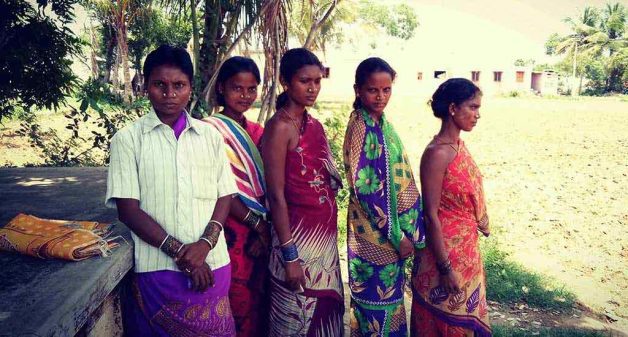 Archaic customs such as restrictions on women wearing a blouse and eating food cooked by others has led to Thottinayakar community lagging in development (Photo by G. Rajasekaran)

At the government primary school of Thottiyanur village in Konagapadi panchayat of Tharamangalam administrative block, all the students belong to the Thottinayakar community. It appeared strange that not a single child from other communities was enrolled in the school.

At the noon meal center of the school, Papamma (52), a woman of the same community, decked in distinctive ornaments like silver anklets and a dozen glass bangles worn between silver bangles, and wearing a men’s shirt, was cooking food for the children.

Nirmala, from neighboring village Athikattanur, is the official cook at the noon meal center, but it is Papamma who cooks every day, without receiving a penny for her work.  Nirmala, who claims to help Papamma, receives the salary.

Papamma has been cooking unofficially for 13 years to uphold the community’s custom that does not allow them to accept even a glass of water or eat food cooked by people of other communities. Such traditions and customs, adhered to fearing divine punishment, have made the Thottinayakar community stagnate in the development milieu.

Thottinayakars are a distinct clan among the nine Rajakambalathar groups who come commonly under the Telugu-speaking Nayakar community that originated from Andhra Pradesh. They trace their ancestry to Polygar chieftain Veerapandiya Kattabomman. The once-warrior Thottinayakars are livestock rearers and agricultural workers now.

Thottinayakar settlements are spread out in rural areas of Viridhunagar, Namakkal, Theni, Dindigul, Karur, Salem, Madurai and Tirupur districts of Tamil Nadu. In Salem, hamlets with 60 to 100 families are found in Tharamangalam, Mecheri, Kadayampatti and Veerapandi blocks.

Earlier, sati, or the burning alive of wives at the funeral pyre of husbands, was common in this community. Caste goddesses, Goddess Jakkamma and Goddess Bommayya – the latter now known as Bomakka – are deifications of women who sacrificed themselves for the community.

Just 7km away from Salem Junction, Thottiyanur is located in a highly developing belt, with the Government Medical College and public sector unit Salem Steel Plant 3km away. The landscape around Thottiyanur is in the cusp of transformation with new institutions and the proposed defense corridor.

In the midst of this change Thottiyanur remains an anthropologist’s field laboratory, for Thottinayakars rigidly retain medieval customs. The village with 100 houses is inhabited by 408 males and 360 females.

“We are prohibited from drinking water or eating food received from people of other community. For these reasons men and women have to return to the village the same day if they happen to go out,” Papamma told VillageSquare.in.

“I render my work as a service to the village deity Bommakka, who is fiercely against her people violating the customs,” said Papamma, not showing any regret cooking for her community children without being paid. If she is sick or has work at home, another girl of the same community substitutes her in the midday meal kitchen.

The Dalit community living in the segregated colony on the fringe of Thottiyanur send their children to school in neighboring village Pothanur located 1.5km away because of the untouchability issue.

Young girls in their late teens and early 20s, including married women, are seen wearing saree without blouse. Some cover themselves with a towel over the saree while a few wear men’s shirts.

Wearing glass bangles between silver ones, silver anklets, toe rings and nose rings on both nostrils and hair rolled into a knot to the left are the typical clothing and accessories style of the Thottinayakar women.  The community zealously follows these customs, attaching religious reasons, and violators, they believe would face visitation of Bomakka deity with harsh punishments.

Devi (23), who was waiting in a queue at the ration shop, was married 10 years ago and is a mother of two children. Devi said that she had never stepped into a school. Four other girls who were also at the ration shop were illiterate. In almost every house in Thottiyanur, young girls were engaged in household chores instead of going to school.

“It is because of the strict adherence to the taboo of not wearing blouse and not taking food or water from other community members, that we did not send our girls to school until the government opened a primary school in our hamlet 13 years ago,”  said Rathinamma (68), a village elder.

“After primary school, we send our girls to the elementary school in T. Konagapadi village which is 2km away but once they attain puberty we make them discontinue their studies,” Rathinamma told VillageSquare.in.

The teacher at Thottiyanur school said that the children’s IQ and attention span was poor. Boys too have not made any significant progress in life. Only Ravi, son of Bomminayakar, is studying B.Sc mathematics.  Another boy Demanayakar, son of Madhaiyan, has taken up work after completing class 12.

Among girls, the exceptions are M. Manju doing her higher secondary at the Government Higher Secondary School in T. Konagapadi and S. Renuka who has completed class 10, but is not pursuing studies further.

Marriage ceremony and puberty rituals follow a strict rigmarole. On puberty the girl is segregated and placed in a separate hut for 12 days. Groceries and utensils are given to her and she has to cook her own food as others are not to come in contact with her.

Marriages are a communal affair with more than one couple wedded in a community tent, according to Ratinamma. “For all their archaic customs, Thottinayakars consider dowry a sin but child marriage is an order than exception,” S . Rani, the village’s anganwadi staff, told VillageSquare.in.

Marriage of girls to close family members is common. Papamma said that her husband married one of the couple’s granddaughters since they do not have a son. Marriage to close relatives are said to happen so that ancestral properties remain within the family.

Illiterate Bomakka (27) (named after the village deity), is married to her 50-year-old maternal uncle and has three children. She was silent when asked whether her marriage or following other customs involved her decision.  After a pause, she said, “We obey what the elders decide.”

Unlike women who are frank to admit customs coming in the way of progressive changes, men are in denial mode. Kuppusamy (55) denied that girls are married before 18 nowadays and said girls are not sent to school after primary class because of practical reasons such as safety and distance.

“It has become a necessity for some families to send women for work. Such working women are permitted to wear men’s shirts,” Kunjamma told VillageSquare.in.  “But on non-working days and during village functions they should follow the tradition.” They cannot wear a blouse on any occasion lest they invite the wrath of Godess Bomakka.

Gender activist Uma Rani of Salem who had worked a decade ago in the village along with the NGO, All India Women Development Association said that women going for work wearing men’s shirts was a small progress. “The changes could not be sustained since the community is too rigid,” Uma Rani told VillageSquare.in.

In addition to the setbacks on social, educational and economic fronts, the community has health problems too, believed to be caused by inbreeding.  Members of the community including children suffer blood disorders, skin rashes and are often afflicted with infections. The health problems, the villagers believe, are punishments from their deity angered by the little compromises being made of late.

The District Child Protection Officer M. Selvam agrees that child marriage is rampant. “The village vigilance committee comprising the village administrative officer, panchayat president,  village school committee do keep vigil on the months when marriages usually take place and alert the officials, but the community manages to evade,” said a staff at Child Line, the national helpline for children in distress.

The Block Development Officer Jegadesan on the other hand requests that specific cases of child marriage or school dropouts be pointed out so as to initiate remedial action.

G. Rajasekaran is a journalist based at Salem, Tamil Nadu. Views are personal.