After a drought and a ban on toddy tapping, palmyrah climbers of a coastal village have taken to the sea, practicing sustainable fishing to conserve marine life and earn a livelihood 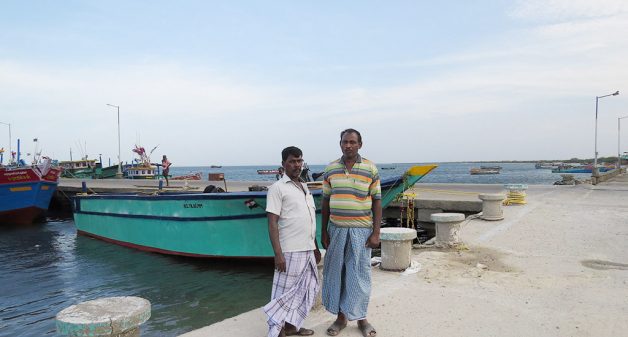 In the backdrop of the mild sound of waves lashing against their boats and mechanized vessels berthed in Tharuvaikulam wharf, fishers were busy mending their nets in a shed. The fishing ban had just ended, and those who had repaired their nets at home were seen bringing them back. Typical scenes of a fishing village.

However, the difference here is that Tharuvaikulam in Thoothukudi (formerly Tuticorin) district in Tamil Nadu, is not a traditional fishing village. “All the fishermen here belong to the community of palmyrah tree climbers,” said 54-year-old Anthony Duraiswamy.

“I used to climb till I was in my mid-20s, then I switched to fishing,” said Anthony Duraiswamy. These men used to tap padhaneer, the sap from palmyrah inflorescence, and toddy, the fermented sap. Today, the palmyrah climbers have become resource-conscious sustainable fishermen.

“There were no fishermen in Tharuvaikulam 50 years ago,” said Vinoth Ravindran, the state coordinator of NETFISH, the extension wing of Marine Products Export Development Authority (MPEDA). Most people here were into tapping toddy and some were into farming.

The older men and women recall the panankaadu (palmyrah grove) close to the shore. Further from the shore stretched acres of palmyrah trees. “They were so close that we could hop from one tree to another,” recalled Francis M.

“My father and two older brothers did only work related to palmyrah trees,” said Anthony Rajan J. (50), who now fishes with his younger brother. The men climbed palmyrah trees not only in Tharuvaikulam, but also in places such as Vilathikulam and Sayalkudi, about 50km away. This kept them busy for about eight months a year. Rest of the year, they took up other jobs such as coral mining.

Francis and Anthoniyar Pitchai, middle-aged fishermen, recall some men in the older generation mining corals. “Initially, only about 20 men set out for coral mining. As it was found to be lucrative, slowly more men started joining them,” said Anthony Duraiswamy.

There were corals in abundance near the 21 uninhabited islands in the Gulf of Mannar. The palmyrah climbers who ventured out into the sea to mine corals used challi odam, a small country boat. “The challi or corals, a rich source of calcium carbonate, was used in the lime industry and was transported to the kilns in Theresepuram near Thoothukudi,” said Vinoth Ravindran. This was how the palmyrah climbers here ventured into the sea first.

“About 40 years ago, a few people fished in pairs near the shore using ola and kuthu nets as there was fish in abundance here. It was mostly for their consumption,” said Francis. They sold only when the catch was more than what they needed.

“Some people think that we tap padhaneer for most of the year and fish the rest of the time. Take a look at the number of boats here and decide for yourself,” said Vijay K. “I still like to climb. But I climb only to get nungu (palmyra fruit).”

According to Vijay, 80% of the men in his village can still climb the palmyrah tree. “But there’s more money in fishing,” said Vijay. Except for a few from the younger generation who took up jobs such as teaching, driving and the like, the rest are fishermen.

Their statement is reflected in a sample study on fishers’ livelihoods carried out by the Fisheries College and Research Institute, Thoothukudi in 2017. As per Census 2011, Tharuvaikulam has 1,743 households. According to the study, in Tharuvaikulam, 88% of the people are dependent solely on fishing for livelihood and the remaining 12% depend partially on it.

With fishing becoming their sole livelihood, the people here became conscious of the need for resource conservation. While the initial push to quit coral mining had come because of the ban in 2001, the decision to refrain from destructive fishing practices was their own.

Initially, having no boats of their own, the men from Tharuvaikulam worked in boats owned by fishermen in Thoothukudi. The fishermen of Thoothukudi are from a traditional fishing community, and some misunderstanding cropped on communal lines between the two groups after both the communities fielded a candidate for an election.

“More than 250 of us were working in Thoothukudi then, and we quit,” recalled Rajan. According to Sundaramoorthy B., dean-in-charge of Dr MGR Fisheries College and Research Institute, Thalainayiru, a few of them then bought old boats and started fishing from Tharuvaikulam. “That happened 20-odd years ago,” recollected Vijay.

When these fishermen were working in Thoothukudi, most of them were employed in vessels that had trawl nets. “When we trawled, we could see coral reefs like koppai (cup corals) and viral (branching corals) getting overturned,” said Francis.

By then, these fishermen were better informed; they had also observed a decline in the population of fish. “The fishes lay eggs and breed among corals. The corals are their houses. We realized that we were destroying their houses,” said Francis. They also figured out that the remaining corals had saved their villages when the tsunami struck in 2004.

They had also observed that the trawl nets were damaging the other nets that were cast for catching crabs, squids, etc. When they trawled near other villages, the fishermen there came out against the practice. “The elders felt that we should not earn at the cost of others,” recalled Francis.

Unlike trawling, gillnetting is a sustainable method of fishing, according to Velvizhi, principal scientist at the Poompuhar center of M S Swaminathan Research Foundation. “The fish get caught in the net by their gills. The size of the mesh differs according to the fish being targeted. This helps juveniles to pass through without getting caught in the net,” she said. In gillnetting, the bycatch is also minimal, thus reducing the environmental impact.

“Gill net is a wall of netting placed in a water column. Fish that try to cross the net are caught. So, it’s passive fishing. Trawling is active fishing because you chase the fish and catch them,” said Sundaramoorthy. Hence, resources close to the seabed are not disturbed. According to Sundaramoorthy, gillnetting is eco-friendly, as one needs more energy to operate a trawler.

The income earned from using a trawl net or a gill net is the same, said Thommai A. (51). “The fishermen using trawl nets have become habituated to that, so they don’t want to give it up,” he said, recounting instances of some fishermen from Tharuvaikulam operating their trawlers from Thoothukudi and running into debts. “One of them came back, switched to gill nets and then earned enough money to clear his debts and get his daughters married,” he said.

Their earnings vary according to the season, the area they operate, etc. However, the income from gillnetting is generally as good or even better than what they can earn through trawling, they said. A year-long study on the economic efficiency of mechanized fishing in Chennai, conducted in 2012 by scientists in the Central Marine Fisheries Research Institute, substantiates the fishermen’s views. According to the study, the gillnetters had earned, per day, an average gross income of Rs 25,046 while the trawlers made Rs 21,910.

The study also showed that multi-day fishing gillnetters need 295 liters of diesel to catch one tonne of fish while multi-day trawlers consume 513 liters to accomplish the same job. “This is because the boats with gill nets need power only to reach the fishing ground whereas trawlers need power to reach the destination as well as to catch fish,” said Sundaramoorthy.

“As biologists, we are concerned about the standing stock of fish. Any biological system depends on the stock and how much we extract. Using a fishing gear and method that is biologically and economically beneficial for the fishing community as well as nature is the need of the hour, and the fishermen in Tharuvaikulam are the best examples for this,” said Sundaramoorthy. It is for this reason he recommends that Tharuvaikulam be considered a model village.