Degraded wastelands have led to a fodder shortage in underdeveloped Barwani district. Involving communities to restore the wastelands will enable them to rear more livestock, thus improving incomes 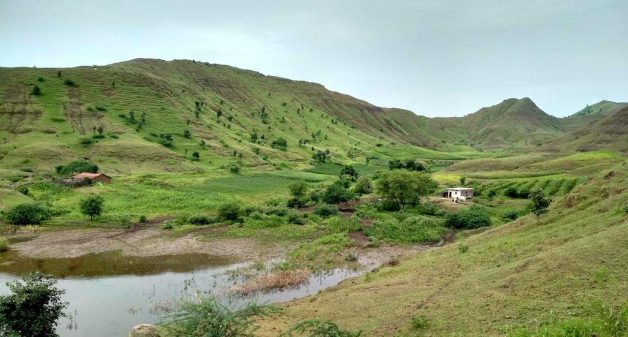 Interspersed among agricultural fields and houses, the wastelands that supplied fodder for villagers’ livestock have been losing vegetation, affecting the rural economy (Photo by Shashank Deora)

Barwani district lies at the south-western tip of Madhya Pradesh. It witnesses relatively dry semi-arid climate with an average annual rainfall around 800 mm. Scheduled Tribes constitute more than half of the total population in Barwani. It is among the most backward districts in India. Niti Aayog has identified it as an aspirational district in an aim to improve its socioeconomic indicators.

Agriculture is the primary livelihood of the district’s population. According to a study by the UK’s Department for International Development (DfID), a large fraction of the tribal population from the district is also dependent on remittances from seasonal migration to nearby regions for their livelihoods.

A research study was conducted in four villages of Pati administrative block of Barwani district, to understand people’s dependence on the traditional common pool resources – land, water and the forest resources that are not owned by any individual – for their livelihood generation.

The research revealed that depleting vegetation has led to lack of fodder for villagers’ livestock, forcing them to minimize their numbers. Involving the community in restoration efforts would lead to sustainable use of wasteland and improve the villagers’ livelihoods.

More than 80% of the total population of Pati block comprises of Scheduled Tribes (ST), mostly Barela tribe (a sub-group of the Bhil tribe). In line with that of the entire Barwani district, this research identified agriculture and seasonal migration as the primary source of livelihood.

Most of the surveyed households rear livestock animals, either large ruminants or small ruminants or both. In a few villages, bullocks are used for ploughing the highly undulating agricultural fields; cows and buffaloes are reared for milk – for self-consumption and sale.

Goats are kept solely for meat, for self-consumption as well as for sale. Thus, livestock rearing is an important economic activity in the region. However, the number of livestock animals reared by an average household has been declining continuously.

Sparse vegetation on the wastelands in the vicinity is the primary reason for this decline. Most of the wastelands in and around the four villages, are legally categorized as either forest lands or revenue lands.

On relatively flat patches of these lands – which are insignificant in proportion to the total land area – people have started cultivating either by encroaching upon them or by receiving legal registration. However, vast tracts of the land lie barren with hardly any vegetation.

Men and women from Katar Falia hamlet of Budi village share a traditional dependence on the wastelands in their vicinity for feeding their livestock. Sem Singh of Budi, who is in his late 40s, said that with increasing population pressure, the lands now do not ensure fodder availability round the year.

Women of Laxmi Mata self-help group of the village said that grass grows on the wastelands during the monsoon months and dries up within a couple of weeks after the last monsoon rainfall. The same story is repeated across villages, and people resort to different sources for fodder after the monsoon.

Maniram, a 50-year-old man from Dabri, depends on agricultural residues for livestock fodder. Others from Dabri and Magarpati villages collect and stock drying grass from the wastelands immediately after the monsoon. Women of Saraswati self-help group in Sawariya Pani village said that several households in their village buy fodder from the market for their cattle.

30-year-old Vikas Jadhav of Sawariya Pani said that he and others from his village used to sell milk from their cows to eateries in Pati, a nearby small town. However, owners of the eateries have stopped buying milk from them for last two years, citing its poor quality as the reason.

Jadhav attributed this to lack of sufficient livestock feed. As a result, people are forced to reduce their livestock to a minimum. Reduced economic returns from livestock rearing have thus, added to the hardships of the tribal population in this backward region.

Vast wastelands with little vegetation can be seen across most of the regions of Barwani district. Conservation and development of these lands can play a critical role in improving the fodder availability and thus support increasing livestock population.

The research revealed that in the past, there had been efforts to rejuvenate these wastelands. According to Jug Singh, a 45-year-old man from Dabri, every year the state carries out plantation drives on some or the other hillock, providing cattle-proof trenches or wired fencing to protect the planted saplings. People at the other three villages also recalled similar efforts.

However, Bina Bai, a 40-year-old woman from Budi village, said that these efforts will not bear any fruit without any supplementary irrigation to sustain these saplings after the monsoon. The state authorities have not taken steps towards watering the saplings.

Nevertheless, the state is not the only institution to be held responsible. Maita of Dabri village, in his early sixties, holds his village folks equally responsible for the loss of vegetation from these lands by never prioritizing its protection. In none of the four villages, people remembered deliberating on protection of these wastelands or cultivating fodder stock on these.

The study revealed that, despite observing the impact of loss of the wastelands’ vegetative cover, the villagers had never discussed restoration. However, in two of the four villages, community members approached the research team for suggestions to make the wastelands more useful for them.

Villagers said that such discourses of people coming together to understand the contribution of the wastelands to their livelihoods had never taken place. The research revealed the need to mainstream such discourses in Pati and in similar regions, to make the community a stakeholder in the state’s efforts of greening the wastelands.

These discussions can help the stakeholders in recognizing the traditional dependence of rural communities on these wastelands. The suggested process can trigger the rejuvenation and sustainable use of these lands as the source of livestock fodder for the local community. This would promote livestock rearing and dairy as a significant livelihood activity in such regions.