Trees and thorny cacti that served as fences protecting crops from cattle, as wind breakers conserving soil moisture, besides providing fertilizer and fodder, are making a comeback in Tamil Nadu 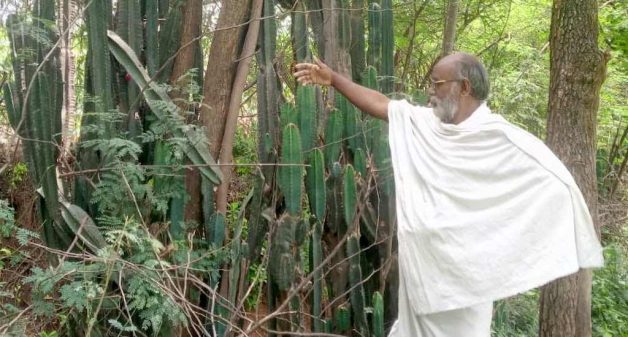 Crops in the 4-acre land of 61-year-old farmer Muthu Murugan are hardly visible from outside. His farm at Thondamuthur village in Coimbatore district has uyir veli – Tamil for living fence – of tall and thorny cactus plants, jatropha and other wild trees.

“I have heard that traditionally forests would act as fences between villages; when men cleared forests for agricultural purpose, they would leave some trees in between, to demarcate the farms,” said Muthu Murugan. “You can still see this in villages here. The fences played a big part in their lives.”

“For instance, siddhars, the traditional medical practitioners, who sourced their herbs from forests started growing them in these border fences. There were also food creepers like veld grape and fodder that farmers grew along these fences,” Muthu Murugan told VillageSquare.in.

According to him, there are some plants like veli paruthi (Pergularia sp) that derive their name from the Tamil word veli for fence, due to their exclusive use as fences.

Serving as a habitat for many birds and animals, the bio-fences serve multiple purposes such as providing fodder, fertilizer and wind breakers, besides conserving biodiversity and absorbing climate-inducing gases such as carbon dioxide.

Aadhiyagai Paramez (30), a progressive farmer from Oddanchatiram in Dindigul district, said that the fencing trees were known as kaatru thaduppan, or wind breaker. “But now, with these trees gone, the wind sucks our lands dry,” he told VillageSquare.in.

All the farmers who grow bio-fences said that they are ideal wind breakers. Vetrimaran of Karur said that the moisture of the land is lost when the wind blows and if there are no bio-fences to slow down the wind speed. “Also, the fallen leaves act as mulch, conserving soil moisture,” he said.

According to Muthu Murugan, people stopped growing bio-fences because they were not patient to wait for the trees to grow, and for the maintenance of trimming every two years. “Growing living fences is more relevant now as they play a huge role in retaining moisture in our farm by acting as wind breakers,” he said.

According to the farmers, a little effort in growing living fences, instead of opting for steel fences, usually fixed for orchards, would save them money, and create additional income. For Lakshminarayanan (64) of Rettanai in Tindivanam district, the additional benefit of growing Bengal currant as bio-fence is that the fruits are in high demand in local bakeries and sell at Rs 50 / kilo.

Paddy farmers were known to cut small branches of the living fence to use as compost, said Paramez. Leaves of trees such as hummingbird tree and quick stick tree can be used as fertilizers for the crops. According to Muthu Murugan, droppings of birds that take shelter in the bio-fence fertilize the soil.

“We can also use these trees to up the productivity of the farm. For instance, we have planted Chinese chaste trees as part of the fence and we plan to use them to make mosquito repellents,” Vetrimaran told VillageSquare.in.

In Tamil Nadu, there has been a substantial increase in peacock population that harm crops. “The fence trees provide an enabling environment for animals such as foxes and wild cats and keep the peacock population in check,” said Paramez.

While kiluvai (Commiphora sp.) seems to be a popular choice among farmers for bio-fences, farmers in Tindivanam district opt for Bengal currant tree with its attractive red fruits. Lakshminarayanan  said that the thorny nature of the tree keeps cattle away.

“You cannot plant this directly in the ground. You have to transplant it after six months and keep trimming it every two years,” Lakshminarayanan told VillageSquare.in. “But once you set the fence, it remains permanent.”

While most of the trees used as bio-fences can serve multiple purposes, Vetrimaran said that the trees should be chosen based on the location and need. “Trees like palmyrah and Manila tamarind can protect the topsoil,” he said.

“One needs to be wary of trees like seema karuvel (Prosopis juliflora) that suck the groundwater and create drought,” said Vetrimaran. “Those rearing livestock can opt for hummingbird tree, quick stick tree and adathoda, as the leaves can be used as fodder.”

According to Muthu Murugan, some farmers use fences for dual purpose. They use the trellis to grow food creepers such as ridge gourd as fence, as cattle do not feed on the creepers. Paramez agreed that people used to grow creepers along the fences but spend money now to set up supporting trellises.

C. Subramaniam (70), of Valliarachal in Tiruppur district, who grows Malabar neem, has been using living fence for decades. “Why spend unnecessarily, when you can get trees like kiluvai from your own neighborhood? Plant them in the rainy season and you will have a tall fence within a year,” he said.

According to Muthu Murugan, farmers face the impact of climate change on a daily basis, not only as reduced rainfall, but increase in night temperature as well. He said that most vegetables that used to flourish in their villages show reduced yield now.

“Through hereditary knowledge, we know that trees like kiluvai can survive drought. With them, you can feel a cooler micro-climate in the farms, and observe more moisture retention,” said Muthu Murugan. “It conserves biodiversity and reduces pollution by absorbing carbon. This could be a small way to mitigate climate change.”

“Research says that we need at least 30% tree canopy. Bio-fences are a great way to achieve that and to bring balance to our ecosystem,” Paramez told VillageSquare.in.  “Bio-fences can help farmers lead a sustainable life by giving them fertilizer, fodder, herbal medicines and more. It’s good to see people going back to it.”