Child cabinets bring students at work back to school

Poverty forces villagers in Kendrapara district to pull children out of school to work and add to household income. Awareness and counseling are now sensitizing parents to let children continue their education 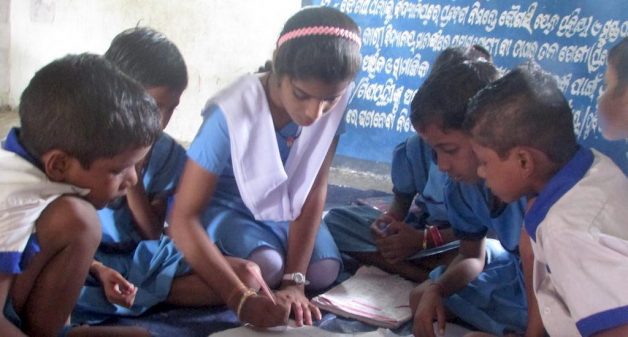 Subhasmita, in addition to convincing parents to send their children to school regularly, helps her classmates and younger children improve their learning (Photo by Rakhi Ghosh)

The Project Upper Primary School in Pentha – a village prone to cyclones and coastal erosion – under Rajnagar administrative block in Odisha’s Kendrapara district – is in the news. The reason is that Subhasmita Tripathy (13), a class 8 student, has been nominated for International Children’s Peace Prize for 2019.

Subhasmita is among 119 child leaders from across the globe nominated for the prize. She was nominated for bringing students who were forced to be irregular to school and improving their age-appropriate learning ability.

Prone to natural calamities and limited livelihoods, villagers make their children work intermittently to boost their family income. Awareness programs, and child cabinets in government schools help students know their rights and learn about the importance of education. This has prompted students like Subhasmita convince parents to send their children to school regularly.

Subhasmita’s efforts started three years ago when she was in class VI. Nature’s Club, a local voluntary organization involved in rights and environment related activities in Rajnagar block, in partnership with Save the Children, a non-profit organization, arranged a meeting in her school.

It was organized to sensitize students and bring awareness about their rights and how education can bring changes in their lives. A few days after attending the meeting, Subhasmita realized that a few students of her class and lower classes were not attending school regularly. As the leader of education in Child Cabinet, she was worried and discussed it with Minati Das, project academic fellow of Nature’s Club.

Child cabinet works in the same manner as a government parliament so that children learn about the functioning and hone their leadership skills. Selected children act as head of different departments like education, food, water and sanitation, etc. under a leader named chief minister.

“Suchi, a girl student of class V, who was not attending school regularly, was very close to my heart. Every day during prayer I will look for her but often she would be absent,” said Subhasmita. “Once I decided to know the reason and make her attend school regularly, I discussed it with Minati didi.”

A day after discussing with Das, Subhasmita reached school a little early. At the assembly prayer in the morning, she found that Suchi had not come. So, she went to Suchi’s house and asked her why she did not attend school regularly.

“Before she could answer, her father shouted at me. He said he would decide whether Suchi should attend school or not,” Subhasmita told VillageSquare.in. “Her mother asked who would do Suchi’s share of the household chores if she attended school every day.”

That night Subhasmita couldn’t sleep. She decided she would do her best to persuade Suchi’s parents to send her to school regularly. With a few of her schoolmates and Minati Das accompanying her, she went to Suchi’s house to convince her parents.

After a month-long persuasion her parents agreed to send Suchi to school regularly. “That gave me confidence to bring other students to school,” said Subhasmita, who now heads Meena Manch of the school, a leadership program – in lieu of child and women’s development wing of the Child Cabinet – conducted in every state-run school to increase attendance and safety of girl students.

In Pentha, there are 65 households with a population of nearly 400 including a group of Bengali-speaking settlers, who have been in Odisha, settled for generations, and mainly into fishing. Children of these families and a few native households are regularly absent from school.

The children are engaged in livelihood works in agriculture fields, fish farming and goat rearing to enhance the family’s income. The number of boys and girls who are not regular to school is almost the same, as both are required to support their family’s earnings. Girls are mostly required for domestic chores and taking care of younger siblings.

“Poverty drives parents from sending their children to school,” Biraja Prasad Pati, advisor, Nature’s Club told VillageSquare.in. “Rajnagar block is prone to climate change threat and marginalized villagers face difficulties in earning their livelihood. They think an extra hand at work will support their earning and hence prefer engaging them in work.”

There is a difference between out-of-school children and irregular students. According to District Information System for Education (DISE) data, 99.9% children attend school regularly. In reality, they do not. The number exists only in paper.

“There are hundreds of students irregular in attending schools. It is not in tribal districts but in Kendrapara villages hit by sea erosion that we found that at least 15% children are irregular,” Abhijeet Bhadra, assistant manager, program, Save the Children, told VillageSquare.in.

As per the Right to Education (RTE) norm, if a child does not attend school for three months at a stretch, the teacher should visit his/her home. If the child does not attend school regularly, even after the parents have been counseled, the teacher will take the help of a member of the panchayat, then write a letter to the block education officer (BEO). If the child still does not come to school, she will be considered a dropout.

During this three-month period, if the child attends school even once, she will not be considered a dropout. “There is a rule to bring back irregular students, understand the reason for being irregular and counsel them to attend regularly. But in reality no teacher does this, citing workload,” said Bhadra.

Some schools do counsel parents. Birju was good at studies. His father migrated to another state and stopped sending money after a few months. Birju being the only male member, his grandfather forced him to work in agriculture fields and tend to cows, to earn and support the family.

“After regular counseling the grandfather agreed to send Birju to school,” Samarendra Sahu, teacher at Pentha Project Upper Primary School, told VillageSquare.in. “At the parent–teacher meetings,  we regularly counsel parents, but as they are not financially sound they send their children to work.”

In 2016, when Save the Children started working in this area, they found the attendance of students quite low than the actual enrollment. Also, during mid-day meal, a few children came, had their meal and went back to work.

“We decided to sensitize school children about their rights and strengthened Child Cabinet to bring back children who were forced to be irregular,” said Bhadra. Though Child Cabinet exists in every government school, they do not function. Strengthening the Child Cabinet in 40 state-run schools of Rajnagar block has helped to bring irregular students back to school.

“Children are also part of school management committee but due to fear they would not raise their voice. Now Child Cabinet has empowered them to speak for their rights. Whether it’s quality of food, education or safety, children are raising their voice,” said Biraja Prasad Pati.

After observing the success of Child Cabinets in the 40 state-run schools, BEO of Rajnagar block is planning to strengthen it in other schools too. In three years Subhasmita has convinced parents of 12 students of her school to send them to school regularly. She also helps to improve their learning ability.

“If she gets International Children’s Peace Prize it will motivate her to reach out to other children and shape their future,” Keshab Charan Palei, the village head, told  VillageSquare.in. “Because only education can help them evade poverty.”