Changes in climatic conditions have led to Himachal farmers growing pomegranates, as many find that apple cultivation, other than high-density varieties, is no longer economically viable 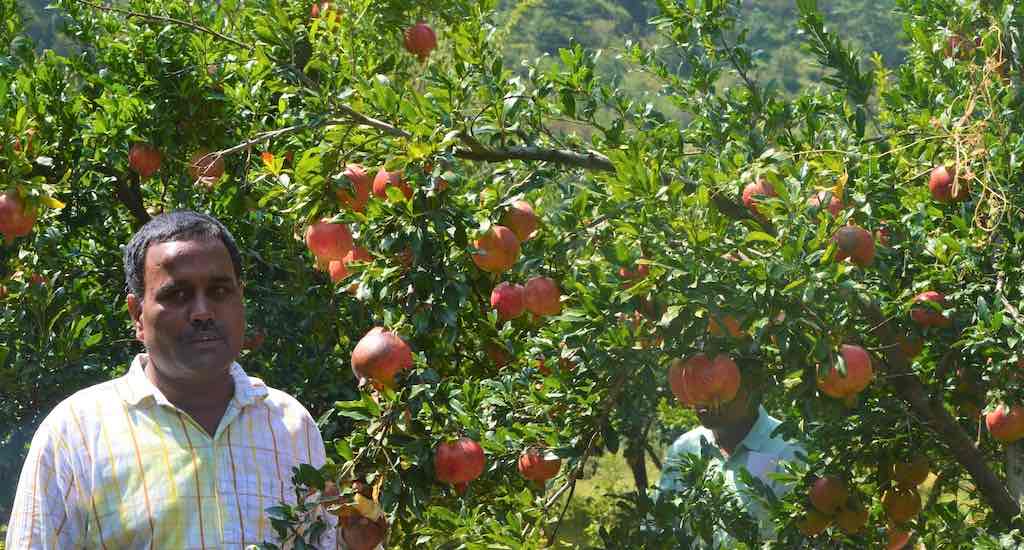 In Himachal Pradesh, farmers like Padamdev have shifted from growing apples to pomegranates, as changes in climate have been affecting their apple production (Photo by Athar Parvaiz)

Padamdev (52) has been a farmer at Manglore-Banjar area of Kullu district in Himachal Pradesh for the past 30 years. Over the years, he has mostly grown apple in his orchard, but he had to change his mind some years ago after the cultivation of apple became difficult at the lower elevation where his village is located.

Experts have traced the difficulty in apple cultivation to change in weather conditions and have advised farmers to grow other horticultural crops like plum, peach and pomegranate till they find a solution for apple production in the lower areas of Himachal Pradesh.

But Padamdev had already thought about switching to pomegranate cultivation when the advice from the government came up. For him, the difficulty in growing apple didn’t lie only in climate-related problems. Growing pomegranate made more economic sense to him.

With climate-induced weather changes affecting production of the famed Himachal apples, farmers in Banjar are switching to other horticultural crops, as it is no longer viable to grow apples in the lower areas.

Climate change, researchers say, is adversely impacting the production of important agricultural and horticultural crops in Indian Himalayan Region (IHR), especially those in the lowlands. For example, increase in temperature and decrease in winter rainfall and snowfall have reduced the number of chilling hours, leading to a decline in apple production in the region.

A study on horticulture, conducted by Indian Himalayas Climate Adaptation Program (IHCAP) in different administrative blocks of Kullu, has classified the small town of Banjar as the most vulnerable region in Indian Himalayas.

According to the study, water is scarce in Banjar, topography is difficult, land is fragmented and connectivity is low. It is difficult to continue with apple cultivation in this region because increase in temperature leads to increased need for water, which is insufficient.

A study conducted by College of Basic Sciences, Palampur, found that about 63% of the farmers in Banjar have switched to alternate crops such as pear, kiwi, pomegranate, persimmon, cabbage and other vegetables along with apple crop.

Farmers said that apple trees start producing fruit after nine years while pomegranate fruit after four years. “I shifted to pomegranate because growing apples was not that profitable,” Padamdev told VillageSquare.in.

In a year, Padamdev makes Rs 1 million from six bigha (1.5 acre) of his orchard. He said that the annual maintenance cost of the trees and the orchard works out to around Rs 15,000 per biga, which means he spends Rs 90,000 per year on maintenance. “So, I make around Rs 9 lakh a year by growing pomegranate. It is really profitable,” he said.

Youdhistra Rathore, another farmer in the village has raised the number of his pomegranate trees to over 200 and he also owns dozens of pear trees. “It has been 14 years since I started growing pomegranate trees. Since the year the trees started producing fruits, I have been making good money,” said Rathore. His pomegranate and pear trees fetch him around Rs 8 lakh a year.

Motilal, a progressive farmer in Banjar, who had realized that apple cultivation was no longer sustainable in the region, diversified into other cash crops such as capsicum, pomegranate and mushroom using poly-lined tanks and micro-irrigation system.

Despite the economic benefits, farmers now worry about the huge amount of pesticides needed for pomegranate cultivation. Farmers spray pesticides five or six times for apple in each season. But for pomegranate, the number of sprays varies between 10 and 14.

According to Motilal Negi, an officer in Himachal Pradesh’s horticulture department, insecticides are also sprayed on pomegranates to protect them from butterflies, whose larvae bore into the fruits and destroy them. “This can certainly make consumers give lesser preference for pomegranates,” he said.

Farmers, who started growing plum, pear and pomegranate after the impact of climate change affected their apple production, realized the economic benefits of cultivating pomegranate.  With pomegranates, they earned twice as much they earned from growing apples. However, they wish to go back to apple cultivation.

What has made the farmers hopeful about reverting to apple production is the new variety of apple trees that can produce apples at lower altitudes. Negi said that the horticulture department of Himachal Pradesh is now promoting high density apple tree varieties that can be grown at lower altitudes such as Banjar.

“Some farmers have already planted these trees. But it is only a very small land area where these high density trees have been planted,” Negi told VillageSquare.in. “The area under high density apple trees needs to be expanded so that farmers can grow both apples and pomegranates.”

The farmers believe that the new high density varieties will give them an advantage as they can start their harvest in June – July. Normally the apple season starts from late August. According to them this would give them a good market opportunity.