Villagers, especially women, are questioning panchayat institutions being used as tools to push government agenda that do not necessarily align with their needs, and want better local governance 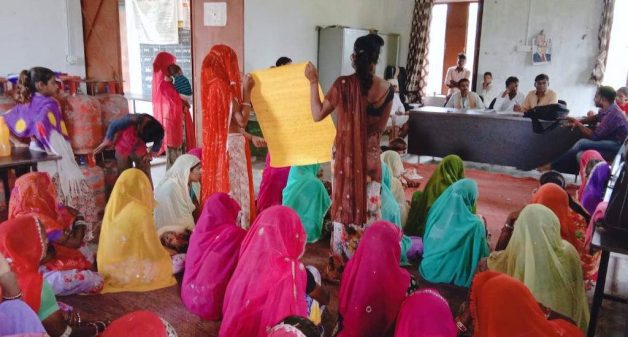 Towards Gandhi’s dream of a self-sufficient village, village governance was introduced through the Panchayati Raj Act in 1992. Gram sabhas were envisioned as people coming together to take decisions regarding allocation and expenditure of public resources.

Ironically, local institutions have become tools to push the central government’s agenda, destroying their very purpose. However, some villagers, women in particular are ensuring that gram sabha meetings address local issues that affect their everyday life.

In Tirol panchayat of Gogunda block, Kishan Lal and a few others visited the panchayat on 2nd October to attend the meeting, though they had not been informed in advance. Without discussing anything, the sachiv (panchayat secretary) urged them to sign the register and leave.

When the villagers asked for details in the register, the sachiv reluctantly read, “We discussed about the ban on plastic. People were made aware about plastic pollution and it becoming a hazard for our villages.” Then everyone took a pledge to not use plastic from then on.

In a gram sabha meeting in Lohagarh panchayat of Dhariyawad block, Pratapgarh district, 150 members of the panchayat had come to discuss their everyday ordeals related to lack of water supply, inaccessible roads, dysfunctional schools and anganwadis or childcare centers.

The sachiv, after dismissing majority of the demands as falling outside the rule book, beseeched everyone to construct toilets in their houses. Sajju Bai said, “There is no water, what can we do after constructing toilets”? “I cannot get water for your ablutions,” the sachiv snapped at her.

Tirol and Lohagarh meetings are examples of regular gram sabha meetings. These platforms shame people who raise legitimate questions and demands. Signatures that indicate attendance are obtained discreetly or forcefully.

Often dates of the meeting are not disclosed and agenda of the meeting is not discussed. The agenda is pre-decided, often echoing the center’s agenda. In Tirol the agenda was ban on single use plastic; a few months ago it was toilet construction.

As against meetings that did not involve citizens, village level meetings were meant to be platforms for popular participation. However, they have ceased to be people’s platform to hold the government functionaries accountable.

This has resulted in pushing universalized schemes that do not align with people’s needs. The schemes are often accompanied by varied eligibility criteria, leaving the panchayat administration and the citizens confused in accessing their benefits, besides maneuvering corruption.

The villagers are either not informed about the gram sabha meetings or are informed very late. Those who are able to make it to the meetings and raise questions, face contempt and verbal abuse. They are challenged for being illiterate.

In Lohagarh, during a mahila sabha meeting (a mandatory meeting for women, that takes place before the gram sabha meeting), Kanka Bai stood up after mustering courage, and said that her hamlet did not have a hand pump. The sachiv asked if she knew the distance between her hamlet and the one that had a hand pump.

Kanka Bai hesitatingly replied, “It takes us one hour to get there, but I don’t know the distance.” The sachiv snapped at her saying, “I am asking about the distance.” Kanka felt ashamed, having been ridiculed in front of 150 people, and sat down.

These instances prove that whenever citizens tried to participate actively, there is resistance. The most common explanation the panchayat officials give is that villagers do not attend the meetings even when informed.

“I went to the sarpanch’s house, to the panchayat office, and even phoned the sachiv to ask about the date of the gram sabha meeting,” said Gajendra, a social worker in Bokhada panchayat in Gogunda block of Udaipur district. No one gave him a date.

The night before the meeting, the panchayat informed Gajendra. With a group of 50 people, he attended the meeting that took place at 8am. “More people would have attended, if we had been informed earlier,” he said. They could still place their demands related to water, employment and ration.

Under Ujala sangathan, a local women’s collective that functions in six Adivasi blocks of southern Rajasthan, the women came together around nine years ago, to create a platform and support system. This group of about 12,000 women functions in the high migration areas of Aravalli region.

Their presence lead to discussions beyond the general vikas (development), of roads, schools and hospitals. “Usually men attend the meetings. They talk about issues that only concerns them, such as roads. But if we attend, we can present issues that affect a majority of the families,” said Bhuri Bai.

Issues that the women focus on are those linked to the Human Development Index. In a mahila sabha meeting in Myala panchayat, Bhagli Bai talked about the dysfunctional government school in her village. “With one teacher for over 150 students, how will all the children receive proper education?” she told the sachiv.

She said, “Our kids are served milk without sugar and only one chapatti during the mid-day meal.” She asked the sachiv to enquire if the government was sending only such quantity of food, and if not, she demanded that every child be fed properly.

Bhuri Bai of Budel panchayat got shutting down of liquor shop in their village included in the agenda, liquor being a major cause for domestic violence. Malki Bai of Malpur raised the issue of corruption in MNREGA and irregular payments. An important demand was of timely vaccinations for children and pregnant women.

The women demand a better quality of life, where their families are well fed, have access to education and have a safe environment to live. Some may need a policy intervention, but majority of the demands can be met with improved implementation of existing schemes.

The women have proved that their citizenship is not something bestowed upon by the state, but something that they practice. Theirs is a collective journey of demanding their rights, and fighting corruption in village institutions.

By creating a space for themselves outside and within their patriarchal households, the women who could only be heard speaking in whispers earlier, when talking to an official, are able to plan, express dissent, and hold their representatives accountable.

If encouraged to participate, everyone can become responsible citizens and collaborators in the process of self-governance. In not doing so, we lose massive amounts of money in implementing schemes that do not resonate with people’s needs.