Having lost homesteads and farmlands to river erosion, Assam’s farmers living in makeshift camps seek government intervention, even as state administration tries to rework a rehabilitation scheme announced in 2015 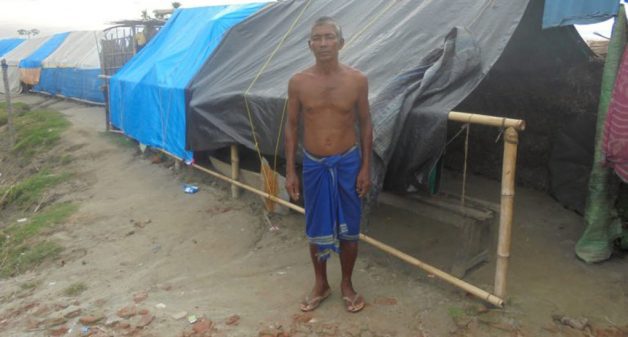 Farmers who have lost their land to river erosion have been forced to stay in makeshift camps, as state government tries to rework a 2015 rehabilitation scheme (Photo by Amarjyoti Borah)

Sixty-year-old Ente Basumatary, a resident of Dungar Guri village in the Morigaon district of Assam in northeast India, expresses both surprise and frustration when asked if he is aware of the Assam government’s ‘Chief Minister’s Special Scheme for Rehabilitation of Erosion Affected Families in Assam’, which was framed in 2015 for erosion-affected families like him.

Once a prosperous farmer having 20 bighas (3.21 hectares) of land, he has lost all his land to the Brahmaputra River, one of the largest river basins in the world. Basumatary has been forced to live in makeshift camps in Kathani village, with his wife and two daughters, for the last six years.

Floods and river bank erosion are the two major problems faced by the state, according to Assam’s water resources department which describes the widening of the Brahmaputra due to erosion as alarming. Brahmaputra and its tributaries have eroded more than 427,000 hectares of land since 1950, which is 7.40% of the area of the state. As assessed, the annual average loss of land is nearly 8,000 ha.

Basumatary’s family is one of several thousand families who have lost their households and land to erosion and are forced to live in makeshift camps in the village. Even his work as a daily wage laborer is under threat as the Kathani village comprising of about 75 families, is on the verge of being eroded.

“We have been born and brought up in this village, and we had 16 bighas (2.56 hectares) of land including our agricultural land. But now only our house remains and that can get eroded any moment,” said 48-year-old Nikhil Deka of Kathani village.

Deka is among the lucky ones. He could purchase a small plot of land in the same district and hopes to be able to build a house there soon. “We were thinking of selling our house and remaining land and moving out, but as the area is erosion affected, no one wants to buy land here. We have to see everything erode in front of our eyes,” said Deka.

Both Basumatary and Deka said that they, like many others,  have been knocking on the doors of government officials, the district administration and political leaders, but have never received any support.

In the recent monsoon session of the Parliament, in a reply to a question raised by Badaruddin Ajmal, Lok Sabha MP from Assam, union minister for Water Resources, Rattan Lal Kataria said that erosion has rendered 86,536 people landless in Assam in the last five years.

Assam revenue department officials said that these figures are only tentative, as it is difficult to ascertain the exact number of landless people in the state due to erosion.

“There are many people in the state who have a piece of land in more than one place in the state, and even if their land at one place gets eroded, it will not be possible to term them as landless. Also, the figure is not constant as it changes with new areas getting eroded,” said a senior official of the Assam revenue department who is posted in the settlement section.

“There are over 300,000 people in Assam who have become landless due to erosion, and the government should document the landless immediately so that they could be compensated,” said Mriganku Bahak, an activist of Ekta Parishad, a grassroots advocacy organization that has been advocating for resettlement of erosion affected families.

‘Chief Minister’s Special Scheme for Rehabilitation of Erosion Affected Families in Assam’, was created after the government came under constant pressure from various civil society groups and opposition political parties to rehabilitate the erosion affected.

The creation of the scheme was necessitated as the state is not able to get funds from the central government to help the victims of erosion for a unique reason, and that is because riverbank erosion is not listed under the list of natural calamities by the government.

Though the scheme was officially notified by the government on March 12, 2015, administrative delays have postponed its implementation, and in these four years, not even a single family has been compensated under the scheme.

The scheme mentions that this rehabilitation policy “would cover the erosion affected families only. Affected families under other natural calamities or man-made disasters would not be covered.”

Quoting the notification, Prasad said that it will take years to get the required data from all the 33 districts in the state, as required by the policy.

“We are now reworking on this to make it more feasible, and once the policy framework is finalized, we will start the field works to identify the beneficiaries across the state, and then will start the process of compensation formally,” said Prasad.

Prasad said it will be a mammoth exercise to identify people who have lost their land to erosion and don’t have any land anywhere else, in accordance with the clause in the notification. “These are important issues in the scheme which need to be addressed and reworked, and we are working on that,” he added.

Prasad also spoke of the complexities around the process of resettlement. “Land is scarce and people want to be resettled in areas close to their (eroded) home for cultural reasons, and don’t want to be rehabilitated in an area which is new to them. We are looking at all these issues in a holistic manner, and will reframe what is required accordingly,” said Prasad.

Rudreswar Sarma, senior engineer and director-design of the Assam Water Resources Department said that the department implements anti-erosion projects as per the recommendations of a ‘technical expert committee’, formed by the state government.

“The department can take up anti-erosion measures only based on suggestions by the committee. There are areas in Assam where there used to be heavy erosion, and projects implemented (as suggested by the committee) have brought down erosion. The committee takes several aspects into consideration before recommending any project, and these include financial implication and feasibility,” said Sarma.

Assam Water Resources Minister Keshab Mahanta said that the state government has made a demand before the central government to include erosion in the admissible list of calamities for funding under the National or State Disaster Relief Fund.

Amarjyoti Borah is a journalist based in Guwahati. Views are personal.

This story was first published in Mongabay India.