Impoverished villages in Kerala’s Wayanad have found green gold in bamboo handicrafts and utility products, which have helped eliminate poverty and given them a regular source of income 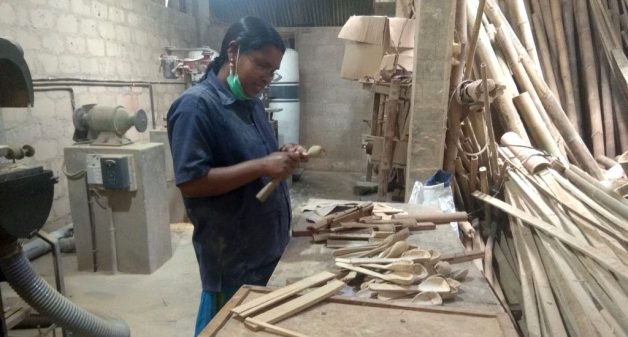 Bamboo-based livelihoods have lifted villagers, especially women, out of poverty, providing them a sustained income (Photo by Chithra Ajith)

“We are trying to tap the potential of bamboo. It plays a vital role in improving the socioeconomic status in many places, especially in Thrikkaipetta village,” said Abdullakutty, president of Uravu, a not-for-profit initiative that aims to bring about rural empowerment through sustainable solutions.

Commonly known as Uravu, the Uravu Indigenous Science and Technology Center, promotes bamboo handicrafts and utility products, as a means of employment for the residents, especially women, of Thrikkaipetta and a few other villages.

Alcoholism and poverty permeated the village and its surrounds. Use of bamboo to make handicrafts, furniture and in construction, with a consistent demand for the products, has ensured a sustained rural livelihood for the villagers, besides social and financial empowerment.

Years ago, Thrikkaipetta in Kalpetta administrative block of Wayanad district was an ordinary village, bogged in poverty. Today it is known as the Bamboo Village. Thrikkaipetta has also come to be known as the bamboo headquarters of Kerala. The only bamboo art gallery of Kerala functions here.

When Uravu was started in 1996, only eight families were working with bamboo, whereas now around 200 families are involved in bamboo related works.

A group of women making fruit baskets recollected their yesteryears. “Desi daru (local liquor), poverty, drugs, hunger, domestic violence and diseases were a constant part of our life then,” said one of the women workers. “But now things have changed for the better.”

While five of the self-help groups function in Thrikkaipetta, the others are spread across villages close to Thrikkaipetta. Making bamboo articles has become the livelihood for women in all these villages. “Making bamboo products has given us a job, food, dignity and empowerment,” said one of the women workers.

While the women are engaged in bamboo related art and craft works, men make furniture and bamboo-based construction. Through Uravu Eco Links, a wing of Uravu, the artisans have completed many houses, homestays and office spaces using bamboo as the main component.

Use of bamboo in construction and interiors furthers the aim of Uravu. Because Uravu was started in 1996 to support the rural poor by protecting traditional knowledge and practices that are environment friendly, and provide rural livelihoods.

In the time of global warming, bamboo used in homes and office spaces help the inside temperature remain low. The artisans take up maintenance support too. According to Rakesh, an artisan and trainer, these works have brought bamboo-based works of the state into the mainstream.

In addition to the bamboo workshop in Thrikkaipetta, there is a workshop each in Kalikkuni, Parathode and Meppadi. Keeping with the demand, bamboo is procured from neighboring states also. The bamboo is chemically seasoned and cut and sized as per requirements.

Except the heavy works that are partially mechanized, most of the works are done manually. This not only helps artisans make a livelihood of working on bamboo products but enables their skills manifest in the products.

Being manually crafted, the products are in high demand at the outlets in Thrikkaipetta and Kalpetta town, as Wayanad attracts local as well as international tourists.

The demand is not only for products, but also for skill training. “Recently our artisans went to Sri Lanka to train the artisans there, as part of a UN program,” Henna Paul, head of operations and sales at Uravu, told VillageSquare.in.

Uravu produces 12,000 bamboo saplings every year and distributes among villagers to plant them in their premises. While collecting bamboo trunks back, workers cut only the matured ones. This facilitates the bamboos live their full span and help conserve the ecosystem.

According to Abdullakutty, bamboo is an effective erosion control plant too. Though bamboo forests grow dense, rainwater flows through them freely. The fibrous nature of bamboo roots prevent soil erosion during rains.

“We can spread the use of bamboo as a substitute for plastic, iron and other hardwood,” said Abdullakutty. The nursery with more than 50 bamboo varieties was set up to promote bamboo’s economic and environment potential.

“Our lives have changed drastically because of the bamboo-based livelihoods. There is no poverty in our village now,” Rakesh told VillageSquare.in.

Many of these bamboo artisans, including women, travelled far to attend training workshops and conferences. “I have been working here since it was started,” said Jaya, while shaping a tribal mask in bamboo. “I love doing bamboo craft and the training I attended has made me confident.”

“Though we were skeptical of the initiative when it began, we started observing the positive impact,” Choyi, a tea seller in the neighborhood told VillageSquare.in. “Hundreds of women started working here. We can see that financial improvement leads to amiable atmosphere at home.”

“With 90% of workers being women, gender sensitivity has increased. Men are becoming aware of gender equality,” said Rakesh. “Our work has increased the social status of bamboo artisans by removing caste-based perceptions.”

“Now bamboo is the primary source of livelihood for them,” said Abdullakutty. “I can proudly say that from the days of poverty, alcoholism and illicit brewing of toddy, villagers have started enjoying job security and regular income.”