Switching from traditional crops, farmers in rain-shadow areas of Maharashtra have found that growing custard apple suited for varied soil and climatic conditions is highly remunerative 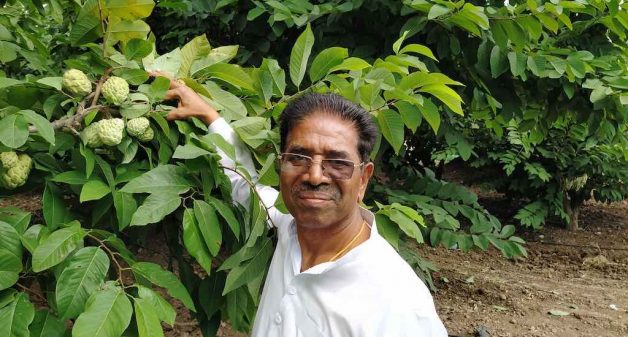 As you step out of the state transport bus on a November noon at Barshi village in Solapur, you’re likely to come across fruit vendors selling all kinds of fruits such as apples, oranges, chickoos and banana, but not sitaphal or custard apple. Odd, for this happens to be a custard apple territory.

Barshi on the Solapur-Pune highway, known for its 13th-century Hemadpanthi-style temple dedicated to Bhagwant or Lord Vishnu, has become the hub of the best hybrid variety of custard apple and its saplings.

Farmers in Solapur district, especially in Barshi, have switched from growing pulses to custard apples, finding them favorable to their agro climatic conditions and financially rewarding.

Custard apple was introduced in Solapur district in 2000, under the states’ crop diversification program. Presently 1,600-odd families cultivate custard apple across 4,260 acres in the district. In Barshi, custard apple is the most preferred crop and has the most concentration compared to other crops.

Close to 500 farming families are engaged in cultivating custard apple in this drought-prone area. Barshi’s acreage under custard apple has witnessed an increase in the last seven years, according to Dr Lal R. Tambade, Senior Scientist & Head, Krishi Vigyan Kendra.

In Maharashtra it is grown in Beed, Aurangabad, Parbhani and Solapur districts. But it’s in Barshi that NMK-01 (Golden), the best quality hybrid is cultivated. The other varieties such as red sitaphal, Balanagari, Washington and Purandhar are grown in the other places.

Presently, the area under custard apple in Maharashtra is over 7,000 hectares, of the total 55,000 hectares nationwide. The topmost producer in the country, Maharashtra has a daily market rate for the fruit, with the Mumbai market rate peaking at Rs 4,540 per quintal this November. The fruit reaches cities like Mumbai, Pune, Hyderabad, Vijayawada, Bengaluru, and far-off Delhi.

Native to South America and the West Indies, custard apple is believed to have been introduced to India by the Portuguese during the 16th century AD.

However, depiction of custard apple in the Bharhut and Sanchi sculptures in Madhya Pradesh, Ajanta Caves in Maharashtra and in the carvings at Mathura in Uttar Pradesh from 2nd BC indicates the fruit’s presence in India in an earlier era.

Belonging to the Annonaceae family, the fruit’s shape defies explanation: it’s heart-shaped, spherical, oblong or irregular with deep or shallow depression at the base. It has a light tan or greenish quilted-skin that turns brown as the fruit ripens.

A dryland crop, custard apple tolerates a variety of conditions, from saline soils to droughts. Custard apple doesn’t need much maintenance. Its irrigation needs are minimal, and the plant is not susceptible to pest attacks.

Lying in the south-east fringe of Maharashtra’s eastern zone, Barshi’s soil is medium to deep black and of rich quality. Traditionally farmers here have been growing jowar, bajra and pulses but have shown their preference for custard apple in the last decade and a half.

The other horticulture crops grown here are pomegranate, grapes, apple ber or Indian jujube and kagzi lemon, the agro climatic conditions dictating the choice. Barshi’s rainfall is uncertain and scanty as it falls under the rain shadow area and most of the farms here are drip-irrigated.

The tree bearing the fruit is fast-growing and responds well to mulching, organic fertilizers and frequent irrigation if there is dry weather during the growing period. The thick, cream-white pulp somewhat granular, is rich in phosphorus, calcium, Vitamin C, magnesium and potassium.

Farmers in Barshi taluk grow three varieties of custard apples namely Balanagri, NMK-01 (Golden) and Anona-2 but it’s the acreage under NMK-01 (Golden) which scores over others.

Of the 140-odd villages in the taluk that grow custard apple, Khamgaon, Gormale, Kasarwadi, Wanewadi and Barshi have witnessed increased acreage over the years and is increasing with each year.

Among the early takers to custard apple cultivation here are the Gardade brothers. “I have been an apple ber farmer since long but when I learnt that I could earn between Rs 5 and Rs 10 for one sitaphal I planted it on 13 acres and now make around Rs 40 lakh a year,” said Ananta Mahadev Gardade (54).

Gardade brothers, who collectively own 40 acres in Wanewade village, grow three varieties of the fruit. “The harvest begins in October with the Balanagri variety and ends with the Golden variety in November end,” Gardade told VillageSquare.in.

Dwelling on the growers’ preference for NMK-01 (Golden) farmer-innovator Navnath Malhari Kaspate (64) and the recipient of Rs 1.5 lakh Plant Genome Saviour Farmer Reward (2015) said, “The yield begins in the third year and lasts at least for 15 years. Each plant bears around 50 to 60 fruits.”

“This variety’s harvest can be deferred, its keeping quality is long, the pulp in the fruit is abundant, and the yields are incomparable to other varieties,” Kaspate told VillageSquare.in. “By cultivating this variety on an acre, growers can earn a profit of at least Rs. 1.5 lakh to Rs. 2 lakh a season.”

Kaspate who has developed five hybrid varieties of custard apple , namely Annona-2, NMK-01 (Golden), NMK-02, NMK-03 and Finger Prints considers NMK-01 (Golden) to be his best as it contains fewer seeds, rarely cracks when ripe, yields increase with every season and each fruit can weigh 400 gm to 600 gm.

According to Kaspate, each tree yields 20 kg of fruit from the third year of plantation. “In an acre holding 340 trees you will get an average of seven to eight tons a season. Translate it into money, the returns are really good,” he said.

Farmers visiting Kaspate’s Madhuban Farm & Nursery, spread on 60 acres in Ghormale village, to learn the techniques of custard apple cultivation are greeted by a man-sized cement sculpture of the fruit. They leave with as much saplings as they can carry or place large orders. Ever since NMK-01’s launch in 2011, Kaspate claims to have sold 30 lakh saplings.

“The agro climatic condition of Barshi is ideal for its cultivation and plantation. That’s the reason most farmers here have nurseries attached to their farms,” Pramod Patil, editor of Shetimitra, a Marathi monthly devoted to farming, told VillageSquare.in.

“In fact, there are around 300 nurseries who sell grafted saplings of non-existent varieties, namely Golden and Super Golden, in order to hide its origin. They are all NMK-O1 (Golden) variety for which Kaspate holds the Intellectual Property Rights under the Protection of Plant Varieties and Farmers’ Rights Act,” said Patil. The fruit which arrives in the market post-Diwali and continues till mid-December has come across as an ally of farmers in the country’s dry land areas that are witnessing an increase aridness in recent years due to climatic changes. With Maharashtra leading with a production of 93,000 tons and the saplings of the fruit being planted in nearly 20 states, farmers growing custard apple have much to thank Barshi for.