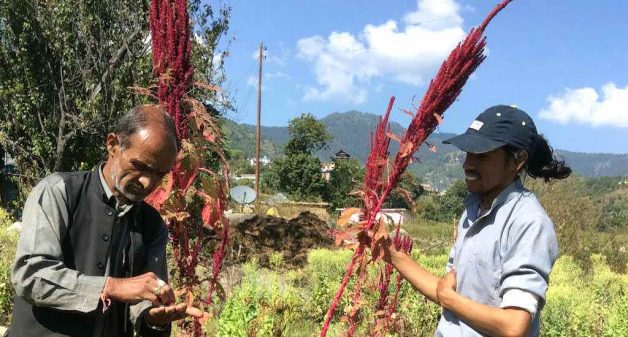 On a bright sunny morning, Chetan Kondel, a resident of Bag village in the picturesque Pangna Valley of Mandi district in Himachal Pradesh, was inspecting the traditional watermill, while the local mason checked the funnel-shaped container.

Organically grown wheat, when passed through the funnel-shaped container, would be ground finely into flour. The traditional watermills, locally referred to as gharat, that use running water to produce energy and grind grains and spices, have not been in use in the mountainous state.

Gram Disha Jaivik Self-help Group, a collective of 10 organic farmers would operate the mill in Bag, and sell value added products like wheat flour. The watermill is part of an effort that includes selling farm produce directly at the market, so as to increase the income of organic farmers.

The watermill is part of an initiative by Delhi-based Gram Disha Trust, a non-profit organization, to revive age-old knowledge in the region for increasing income of farmers and for providing them improved market linkage.

In addition to the water mill located near the gurgling Pangna River, a community center and a shop located on the road leading to Pangna bazaar, are aimed at improving market access for these smallholder farmers, who grow vegetables and grains like wheat and maize organically.

The retail shop serves twin purposes. It acts as a collection center for the farm produce and also gives the farmers a chance to sell the vegetables directly to consumers.

Right now, the farmers get good returns by selling their produce in Delhi through Jaivik Haat, an organic retail store, and also through the weekly Delhi Organic Farmers’ Market organized every Sunday at a leading hotel.

The group sends the produce by bus, from 5 kg to 50 kg according to the season. “We supply vegetables to Delhi and the peak season is from May to October,” said Dunichand, a senior member of the Gram Disha Jaivik SHG (self-help group).

“When we have excess produce there is a break in supply as our produce have to be sold first in the National Capital Region (NCR),” said Dunichand. Besides the excess quantity, items like cabbage and leafy greens pose a problem because of their perishable nature.

Kondel said that the farmers cannot grow vegetables except peas during the harsh winter. This leads to a gap in supply, which disappoints customers. “The supply should be throughout the year as some people are ready to pay high prices for organic produce,” he said.

One of the farmers said that many buyers went to the local mandi as it was flooded with vegetables, though grown with chemical pesticides. To tide over this crisis, he suggested shifting the shop to the vicinity of the bus stand where there would be more buyers.

The farmers get a better price for vegetables than for pulses and grains. Apart from vegetables and grains, there will soon be organic flour processed at the water mill. The mill can run 24 hours and can process two to four quintals of wheat at a time.

According to farmer Bhupinder Kumar, the best thing about joining the SHG is that farmers get to know about a lot of government schemes related to agriculture. The average income of the group stands at Rs30,000.

“Earlier, we were not getting the right price. Moreover, our production was low and income was very less. Now we get good prices at Jaivik Haat,” said Kondel. “While capsicum sells at Rs 20-25 at the local market, in Delhi we get Rs 40-60 per kg. Carrots fetch Rs 60 per kg and radish sells at Rs 30 per kg.”

“We also supply paddy, wheat and maize. But as Delhi is far and transportation becomes difficult in winter, we need to tap nearby markets,” said Kondel. Though distance adds to the price of produce sold in NCR, buyers are willing to pay more since the produce is organic.

“Direct retail selling locally fetches a better price than selling via wholesalers,” said Kondel. The group owns two acres of land, which is run under the participatory guarantee system. This ensures that the produce is certified as organic, as per Food Safety and Standards Authority of India (FSSAI) regulation.

“Enthused by our SHG’s success, other farmers also want to join our group,” said Bhuteshwar Chauhan. The farmers dedicatedly devote time to this enterprise and attend all the meetings.

The women farmers of Bag village run a separate informal SHG that was created 10 years ago. The members target financial savings and pay Rs 50 towards this purpose.

“Some women feel that they should withdraw their share of the money. This is the reason we haven’t been able to register our SHG despite being active for 10 years,” said Vandana Devi. She holds the responsibility of depositing the cash every month in the Gramin Bank at Pangna.

Villagers appreciate the women’s efforts. Meera Devi, a member of the women’s SHG, is open to the idea of joining hands with men. “This will be a good move, as women slog more than men in Himachal when it comes to field work,” she said.

Even though the group’s savings is less, the women farmers of Bag wish to continue the collective effort. They feel that becoming a part of the men’s SHG would strengthen their group and help them have market access.

Deepanwita Niyogi is a Delhi-based journalist. Views are personal.