Enforcement of laws related to cattle trade has affected the famed Sonepur cattle fair, with cattle numbers decreasing steadily at the fair and sale dwindling by the year 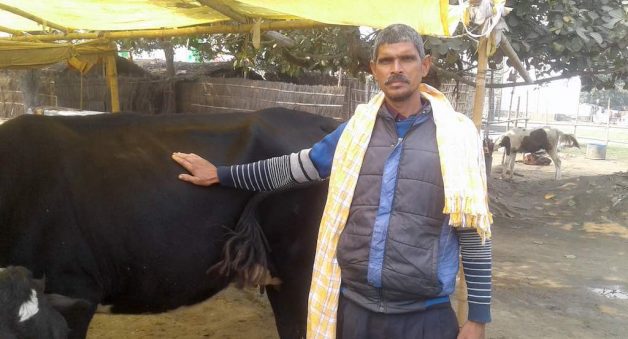 Unlike the milling crowds and cattle of the past, very few cattle are seen at Sonepur, appearing more like a village market (Photo by Mohd Imran Khan)

For Lulan Prasad Singh, in his early 60s, the Sonepur pashu mela (cattle fair) has lost its traditional character. Nothing is left of its legacies that give a glimpse of rural life. He finds the vibrant flavors of rural India missing at the Sonepur fair.

Singh, who owns a portion of the vast spread of private land that has been the venue for the fair for decades, is unsure if the cattle fair would continue to be held or if it would face a slow death. A group of cattle traders sat chatting with him as sales were dull.

With a ban on certain cattle trades, the Sonepur cattle fair has been losing its characteristic, with dwindling cattle trade and increasing consumerist attractions. The fair does not serve its purpose completely.

Cattle brokers, old hands at Sonepur cattle fair, are worried that there is no business these days. They have been witnessing the decline in sales for nearly two decades, after the government implemented various laws.

The government imposed a ban on the trading of elephants in 2004, under the Wildlife Protection Act, 1972. Even after the ban, decorative elephants were brought to the fair till 2016 for display, as elephants were a big draw. In the last three years, there has been no elephant at the fair.

Sonepur cattle fair suffered a blow in 2017, when the central government banned sale of cattle for slaughter at animal fairs. The ban, enforced under Prevention of Cruelty to Animals Rules, hit the traders hard. Farmers did not bring milch animals as those selling cows were attacked by cow vigilantes.

Sushil Kumar Modi, deputy chief minister of Bihar, claims credit for stopping sale of cattle for slaughter. “It was I who raised voice against trading of cattle for the slaughterhouses of Assam and other states. Transportation of cattle by train was banned after my demand,” he said.

“It is a baseless propaganda by people with vested political interests,” Devnath Rai, a cattle trader, told VillageSquare.in. “Would anyone buy milch cows and buffaloes for Rs 50,000 or Rs 1 lakh and send it for slaughter, when animals for slaughter are available for Rs 5,000 to Rs 10,000?”

Devnath Raj questioned why government continued to issue licenses for slaughterhouses, if they were against the practice. Other cattle traders agreed that it was wrong to link slaughtering of animals to cattle fairs.

Some of the traders blamed the government led by Nitish Kumar of Janata Dal-United and Sushil Kumar Modi of BJP for the declining popularity of the fair. According to them, the duo has only hampered trade at the fair instead of developing it.

As per legend, the British named it Asia’s largest cattle fair, as it was reportedly the only one of its kind in the sub-continent then. Till the late 1990s and turn of the millennium, the fair spread across 500 acres, near the confluence of Ganga and Gandak rivers in Saran district.

Singh, who has witnessed the cattle fair since his childhood recalls it to be a rural affair. He recalls the overcrowded fair. In addition to the cows, bulls and buffaloes, the fair used to attract goats, birds, horses, asses, elephants, camels, dogs and rabbits.

According to Lulan Singh, it has lost its charm and crowd, though Bihar’s tourism department touts it as Asia’s largest cattle fair. Earlier hundreds of international tourists would visit the fair, enjoying the birds and the elephants’ bath in the riverbanks. This year there were only 30 foreign tourists.

The fair began this year on Nov 11, on Kartik Purnima as has been the tradition for centuries. As is the custom, the fair begins with thousands taking a holy dip in the river.

“It’s the 14th day of the fair and I have sold only one cow so far,” said Devnath Raj, seated outside his temporary thatched hut in the once famous gai bazaar. “Till 2006-07, I used to sell eight to 10 cattle every day.”

“Traders brought dozens of bulls on the first day of the fair but returned without selling a single bull,” Ganesh Rai, a cattle trader, told VillageSquare.in. “There are only about 50 cows, a handful of buffaloes and about 500 horses and goats in the fair.”

According to Devnath Raj, cattle traders from Punjab and Haryana no longer bring cattle for sale and farmers from Assam no longer come to buy high breed cows and buffaloes. Many regular traders have stopped coming since they have to spend on rent, fodder for animals and food for themselves, but do not make enough money.

Prabhesh Kumar Singh, animal husbandry officer of Saran district said that as per official records, seven buffaloes were brought on the first day of the fair this year and none was sold. He said that the number of horses was also nearly 3,000, whereas it was 4,500 last year. There were no camels this year.

“There is no doubt that the number of cattle brought to the fair has decreased substantially,” Ataur Rahman, regional director of Animal Husbandry Department, Saran district, told VillageSqaure.in. “Other changes linked to the fair can also be observed.”

Unlike the past, the Sonepur pashu mela wears a different look. Dusty fields are empty. There are no crowds thronging the narrow roads. Rural men and women were seen cooking food with cow dung and dry wood under mango trees. Many were taking rest, unlike the busy bargaining sounds of the past.

Less number of cattle has affected the livelihood of villagers who used to supply green fodder for the cattle.

A police officer on duty at the fair said that gai bazaar, ghora bazaar, bail bazaar, hathi bazaar and chiriya bazaar – each for a different animal – were empty, though the fair would continue till December 10. “Though it’s only 30 km from Patna, urban visitors stopped coming since the main attractions of elephants and birds are not there,” he said.

“In future, people will only read about Sonepur cattle fair,” Satendar Yadav, a horse trader, told VillageSquare.in. “Dance and theatre shows at night, temporary showrooms for two wheelers and the like seem to be better attractions now.”

There are large hoardings of film stars endorsing products. The most crowded places in the fair are the makeshift shops selling clothes, woolen blankets, kitchenware and modern gadgets.

To sustain the fair

Ramanujan Prasad Yadav, Rashtriya Janata Dal MLA from Sonepur, now known as Subarnapur, said that the fair could be turned into an agri-fair. “Nearly 70% of Bihar’s population depends on agriculture. This fair can be turned into a training center for farmers and a hub for agricultural machines and tools,” he said.

Sonepur cattle fair appears like the weekly cattle markets in villages Nowadays. Singh is among the dozens of people selling snacks popular in rural areas and handmade items that would be of use to villagers.

Singh wishes to save the cattle fair, though he knows that it cannot return to its original glory. “We are investing from our pockets to provide basic facilities for the traders, as they are our last hope for improving the fair,” he said.

“We try to bring goat breeds from Rajasthan and Bareilly in Uttar Pradesh through traders,” said Singh. With a high demand for goats among local farmers, he sees the presence of a dozen goat traders and hundreds of goats as a positive sign.