While farmer producer companies mushroom across the country because of government’s financial incentives, problems in input delivery and sale of produce persist, making their long-term sustenance difficult 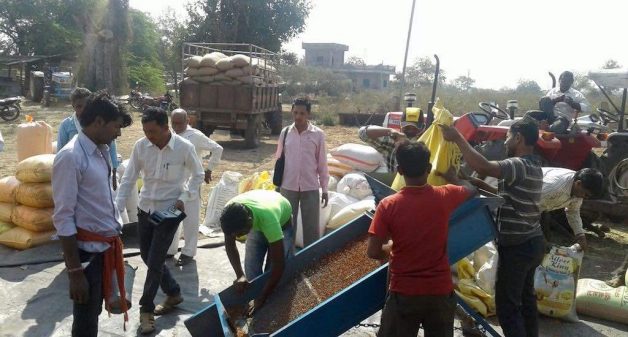 Farmer producer companies have not addressed the problems of the cooperatives of the earlier era and have not been financially sustainable, barring a few (Photo courtesy: MAHAFPC)

Newspapers and social media keep reporting stories of farmers dumping goods like tomatoes or fruits on the roadside as the market prices do not even cover the cost of transport; or more popularly now, how onion sells for Rs 100 per kg in cities while farmers get only Rs 10. There is not only a sense of déjà vu about such reports but also sense of reader fatigue.

There is a popular agreement among policy makers, livelihoods promoters and NGOs about the fact that information asymmetry, low holding capacity, insufficient and unreliable infrastructure and an unfavorable power balance in the market work against the economic interests of farmers. Barring an exceptional Amul or some such instance, no one has found a lasting solution that can reduce the misery of farmers.

Farmer producer companies, introduced after the poor performance of the agricultural cooperatives of the prior decades, have not only addressed the problems that led to the failure of cooperatives but also have other problems to contend with. This has led to poor performance of farmer producer companies too, after the withdrawal of the economic incentives.

The previous century was the era of cooperatives. Under the tutelage first of Reserve Bank of India and later the Department of Agriculture and Cooperation, millions of cooperatives were set up in villages across the country. These were meant to address the problem of missing links in credit delivery, as well as provide a last mile servicing point for input delivery and output marketing for the farmers.

These services were bundled in the Primary Agricultural Cooperative Societies at ground level and federated at district level in District Cooperative Credit Bank (DCCB) for credit and District Sale Purchase Unions or entities of similar names for commodities. In turn these district banks or unions were further federated into apex organizations with typical names like Apex Bank, MarkFed, etc. so far as commodity trade was concerned.

Inspired by these developments, thousands of special single commodity cooperatives, uniting producers of that commodity came up. Cooperatives of dairy, vegetables, cotton, oilseeds, fruits, sugarcane and virtually everything else came up. The most noteworthy commodity and the one in which cooperatives still survive is dairy products.

By the mid-eighties, the economic graveyard of rural India was full of dead or near-dead cooperatives in most states. State governments tried desperately to keep them alive by repeated infusion of capital or other means. This could have been because they often were the resting places for defeated politicians of the ruling dispensation or the power bases of their current bosses.

In many states, the control of government due to the state investments in cooperatives was so complete that it was difficult to distinguish between cooperatives and the other public enterprises of the state. Excessive control rather than facilitation by bureaucracy was often seen as the main reason for poor performance of cooperatives.

With the demise of the Soviet Russia based ideologies, state patronage to cooperatives began to reduce across the board. Even the most ardent supporters of cooperatives, including the most venerated people known for their supreme sacrifices and impeccable honesty, saw them as relics of a past that did not deserve to be revived.

But the problems of providing a fair input or output market to farmers remained. Search for solutions continued. In the last two decades, the fever of setting up farmer producer companies (FPCs) has been spreading like a recurrent viral fever.

The infection or the virus comes from a very tempting set of policies in which the State or its diverse affiliates offer limited period subsidies and economic incentives for setting up and management of these new structures. The skies of the rural economy are now dotted with thousands of these new balloons called Farmer Producer Companies and more are being floated.

What has been the experience and where are we headed? A well-known management institute studied a few thousand of these entities some years ago and found a handful of them showing signs of financial sustainability. Even today, the number of viable entities capable of running in future on their own steam perhaps does not exceed a few hundred. Why is that? Let us attempt the answer in three parts.

In general, FPCs that came up purely in response to the economic incentives being offered, rather than for a strong shared and articulated need of producers, became sick as soon as the economic incentives were withdrawn. Whether these incentives have been misdirected by those who promoted them is a fascinating aside, which journalists could perhaps follow; I will not.

FPCs have tended to do some business in inputs as the concreteness of the service of pooled procurement of fertilizers, pesticides or seeds makes palpable sense to producers. In such instances the danger is that farmers attribute all defects in products – such as poor seed germination rates, to the FPC and it suffers a loss of goodwill, business and money spent in the seeds business. The chief risk factor here is the nimbleness of private trade that is adept at spotting the chinks in the armor of the FPC and snatch away the most profitable business from it.

FPCs have also done well when they act as procurement agents of national agencies mandated to operationalize the price support announced by the State to distressed producers of whichever commodity: pulses, cotton, onion, etc.

FPCs in general have not been able to do well in output marketing which is not designed merely to service the price support organization of the State. The cash fixation of producers, the facility with which the trade is ever willing to dole out advances and payments in hard currency rather than bank transfers and the formal processes required of the FPC make this situation even more unfavorable.

FPCs are compliance intensive. After all, they are registered as companies and have to file the 90-odd returns annually like any other company. The most interesting contretemps happens where semi-literate women directors of tiny FPCs have to complete all formalities and need to obtain the Director’s Identity Number (DIN).

Readers will note that the process of obtaining a DIN is a little complex even for well-educated urban people and seems to be almost cruelly irrelevant for the village women. The cost of even just the compliance with regulation often exceeds the gross business margins that the FPC makes.

Finally, FPCs do not address the fundamental problems that crippled the cooperatives. The problems include inadequate member equity capital, consequent under-capitalization and hence insufficient working capital, never ending “partner of the last course” behavior of the members; moral hazard in commodity operations, absence of any marked competitive edge over private operators, perennial economic myopia of members which puts huge pressure both on retained earnings and on working capital, etc.

All or most of these problems arise due to diffused entrepreneurial roles in FPCs or at most subsuming entrepreneurship by an external non-producer party; contrasted with the private operators driven by strong profit motives. We shall explore this aspect in more detail in subsequent articles.