With the demand for fiber-reinforced plastic boats increasing after the 2004 Indian Ocean tsunami, wooden boat builders of Tharuvaikulam in Tamil Nadu adapt to growing needs of the marine fishing sector 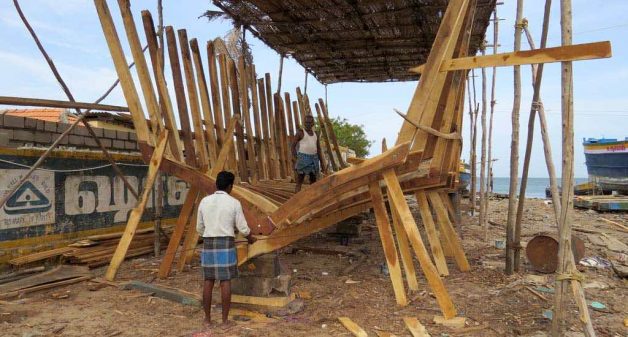 In a boatyard in Tharuvaikulam, boatwrights who used to build wooden boats, get a wooden frame ready for a fiber boat, preferred by most fishermen nowadays (Photo by Jency Samuel)

The sound of wood being sawed and planed, and nails being hammered mingled with the sound of the waves near the Tharuvaikulam shore. The boat building yard of Thangadurai is an open land, within a stone’s throw of Tharuvaikulam wharf. A thatch over the skeleton of a boat is more for protection of the workers.

Thangadurai and his team were getting a boat ready for a client, a new one having set sail from his yard the previous day. 45-year-old Thangadurai has been building boats right from his teenage days. He and his brothers started by helping their father.

Similar scenes of wooden strips being measured, and plywood panels being fixed to the wooden frame played out in the other boatyards along the Tharuvaikulam coast. Switching from alternate professions a few decades ago, the boatwrights of Tharuvaikulam who used to build wooden boats have adapted to changing times and now make fiber boats as well.

Though there were some fiber-reinforced plastic (FRP) fishing boats – generally referred to as fiber boats by the fishermen – plying the oceans, their number increased when national and international organizations distributed them to fishermen who had lost their vessels to the Indian Ocean tsunami of 2004.

According to a 10-year-old report, the number of FRP boat-building units tripled from 13 after the tsunami. When fishermen who used the fiber boats found them to be convenient, they approached the boatwrights of Tharuvaikulam for repairs initially.

The boatwrights decided to seize the opportunity. Starting with minor repair of fiber boats, within a short period they graduated to making them. Now they are adept at making wooden and FRP boats of different categories and sizes, but as specified by the government.

“There was a demand for fiber boats. There was also competition from boat builders of other places on the east coast, forcing them to adapt,” Nirmal, who owns a fiber boat built in a Tharuvaikulam boatyard, told VillageSquare.in. “They knew they had to change since many fishermen opt for fiber boats nowadays.”

“We use timber from two trees generally, sometimes we use tamarind tree logs also,” said Thangadurai. The boat builders get logs of vaagai and aini trees (Albizia lebbeck and Artocarpus hirsutus) from Kerala. They buy material for the fiber boats from Coimbatore. Both the materials attract taxes, said the boatwrights.

Wooden frames are used for the fiber boats too. Seasoning of the wooden logs takes nearly a month. The men use the logs after the moisture content reduces. “Then it takes three months and a team of 12 to 15 to build a boat,” Vijay, whose deep sea vessel was built by Thangadurai, told VillageSquare.in. Fiber boats are built in about five months, depending on the length.

According to Nirmal, the general preference nowadays is for FRP boats. With 4,200 vessels plying from Thoothukudi harbor – which is about 25 km from Tharuvaikulam, and involved in marine fishing, there is a constant demand for the services of Tharuvaikulam boatwrights for repairs and building of new boats.

For FRP boats, the men get the pasting of FRP mats done by a few workers from Thoothukudi, under their supervision. “Though making fiber boats need more time and labor, we are able to charge accordingly,” Sundar, who specializes in fixing the fiber mats onto the wooden frame, told VillageSquare.in.

What the Tharuvaikulam boatwrights build could be country boats or mechanized boats, with a slight variation in the structure between the two. While a wooden country boat of 65 feet length could cost about Rs 20 lakh without the engine, a fiber boat of the same length would cost about Rs 35 lakh.

Interestingly the boat builders of Tharuvaikulam were neither into boat building nor into carpentry traditionally. “We are only the third generation people building boats here,” said Shankar. Shankar’s forebear Madaswamy was an ironsmith.

“Since Madaswamy used to make iron farm tools with wooden handles, he knew how to handle wood. He adapted easily,” Francis, a fisherman who owns a wooden country boat, told VillageSquare.in. The villagers encouraged Madaswamy to set up a yard and get into boat building.

Madaswamy observed boats being built at the Thoothukudi harbor, and learned the work on the job. He recruited extended family members and a few villagers into the profession. The trend caught on and now Tharuvaikulam boasts of five boatyards.

According to Census 2011, Tharuvaikulam village in Ottapidaram taluk of Thoothukudi district has a population of 7,325, 88% of whom are dependent solely on fishing. This translates as consistent work for Tharuvaikulam’s boat builders.

However, the boat builders emphasize that they build and repair boats of fishermen from other districts as well. “We don’t go to other districts or states, but work only in our yard,” said Shankar. “If it’s for repair work, people bring the boats here. For new boats, they just place the order, we buy the material and build in our yard.”