Established in rural areas lacking in development, state-run model schools in Rajasthan are offering quality education for free to students from socially and economically disadvantaged backgrounds 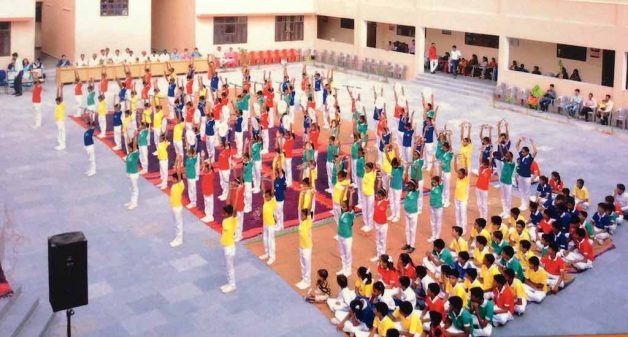 Neha Sipania, a student of class XI in Swami Vivekananda Government Model (SVGM) School in Chaksu, about 50 km from Jaipur, says it is important that she completes her education. She says that her school gives her the right atmosphere and positivity that helps her through many difficulties.

Sipania hails from a rural background, where most live below poverty line. Her parents could not send her to a good private school. When they learnt about SVGM school that has all the facilities like a private school, they wanted their daughter to be enrolled there.

Although admissions are solely through a draw of lots, Sipania’s luck favored her. Her parents are happy that her school education has been ensured. The government provides for Sipania’s education, from fees to uniform and lunch, just as it does for all the students.

SVGM schools, such as the one in Chaksu in Jaipur district, enable students like Sipania from economically and socially poor background, to get good quality education free of cost.

The government started SGVM schools in 2014 for classes VI to XII, to ensure education for all. 71 SGVM schools were started in the first phase and the rest in the second phase.

SVGM schools were set up for children from deprived families. The schools serve as model centers of quality education. Since 2014, SVGM schools have been a boon for below poverty line (BPL) families, and for people who find it hard to enroll their children because of social constraints.

“What distinguishes these model schools is that, children of widows, divorcees and HIV-affected women, get first priority in the enrolment process, as otherwise destitute women find it difficult to educate their children,” Anita Meena, principal of SVGM school in Chaksu told VillageSquare.in.

“The school’s emphasis is on providing quality education to those who cannot access it otherwise,” said Meena. “So we enroll children with special needs, minorities and those from downtrodden families of all caste and creed.”

The government has established SVGM schools in those blocks that have a sizeable population of poor and deprived people. Children in respective blocks get preference during enrolment. Hence the school in Chaksu is for the children of Chaksu block.

“SVGM schools were planned to cater to the rising aspirations among the poor people, who feel that English is an essential ingredient of quality in education,” Tiwari told VillageSquare.in.

What sets the SVGM schools apart from other government schools and Navodaya Vidyalaya schools is its transparent admission procedure. Admission is through draw of lots, where villagers can witness the entire process.

A committee, comprising the school principal, block education officer, senior secondary school officials and a villager, monitors the draw held in front of the villagers. The system has helped villagers see SVGM schools in a good light.

The villagers now understand that admission is not based on marks like in the other schools. While Navodaya Vidyalaya schools focus on bright students in rural areas and has no reservation for poor or backward students, SVGM is inclusive in its approach.

However, enrolment for class IX is through a test. Those who have studied in SVGM schools up to class VIII and scored minimum 45% marks are eligible to apply for admission to class IX. The school helps those who did not score 45% marks in class VIII, to get admission in other government schools.

The SVGM schools are affiliated to the Central Board of Secondary Education (CBSE). The curriculum is in English. “Initially, bilingual teaching is adopted as rural children find it difficult to cope with English,” said Meena. “There is also an abridged course for English proficiency and the children learn fast.”

Nalin Sharma, a class XI student, is happy that he shifted to SVGM school, Chaksu, from a private primary school. “This doesn’t feel like a government school. It has facilities that are generally not found in government schools,” Sharma told VillageSquare.in, speaking in English.

The SCM SPRI study found that the schools have strong infrastructural and academic facilities. The buildings are large and spacious; the teachers and school staff have sound academic and administrative capabilities.

In SVGM schools, a student, teacher ratio of 40:1 is strictly followed. So each class has two sections of 40 students each. Out of these 80 seats, there are 10 ‘desire seats’ earmarked for local legislative assembly, Rajya Sabha and Lok Sabha members, village parishad and education department officials.

The Chaksu school has a total of 463 students in classes VI to XI, comprising 55% girls and 45% boys. Most of these schools have only science stream in higher secondary. Although labs have been provided, they are not yet functional in Chaksu.

Girls get preference during enrolment in 55:45 ratio, though this is subject to category-wise availability of boys and girls. When girls in prescribed numbers are not available, boys outnumber girls. The girls’ restrooms have sanitary napkin vending machine and incinerator. Girls also get Rs 20 vouchers for transportation.

There is complete enrolment in all classes, except class XII which has been introduced recently. Attendance is by and large normal. The survey found the results of class X CBSE examination laudable.

Students of 132 schools appeared for class X examination in 2019. The pass percentage was 93.19%, an achievement in itself according to the staff, since writing the examination in English was a new experience for the students. Out of 4,938 students, 116 got more than 90% marks, while 882 scored between 80% and 90%. More than 55% students scored above 60%.

Despite the good performance of SVGM schools, the present government of Rajasthan has launched Mahatma Gandhi Government Schools. Some schools have been established in the academic year 2018-19.

Educational experts feel that the funds earmarked for SVGM schools may be diverted towards Mahatma Gandhi English Medium schools and hence SGVM schools may suffer ultimately.

Experts say that government should prioritize SVGM schools as they are exclusively for the deprived sections of society and are in underdeveloped blocks. But Mahatma Gandhi schools would be located anywhere in a district, without taking economic parameters into consideration.

The survey found that even the best of schemes tend to become routine under systemic behaviorism. Innovative programs such as Lok-Jumbish, Shiksha-Karmi, Janshala and Sarva Shiksha Abhiyan, could not fulfill their designated objectives due to bureaucratic hurdles and inept implementation.

The teachers in SVGM are on deputation, selected after proper screening and interview. Their basic salary is 10% more than that of other government schoolteachers. However, they put in longer hours and are also away from home. Teachers feel the need for a monitoring system for them once or twice a year, to maintain the quality of education.

Oblivious to the future of their school, a group of class VIII girls in Chaksu was engaged in craft work. “Sometimes school may be hard. But we love coming as we learn so many new things. It’s like a new world unfolding before us,” the girls said in unison.