Struggling to make a living from subsistence farming, women farmers in southern Rajasthan have succeeded in breaking the cycle of poverty and doubling household incomes by cultivating marigold and roses 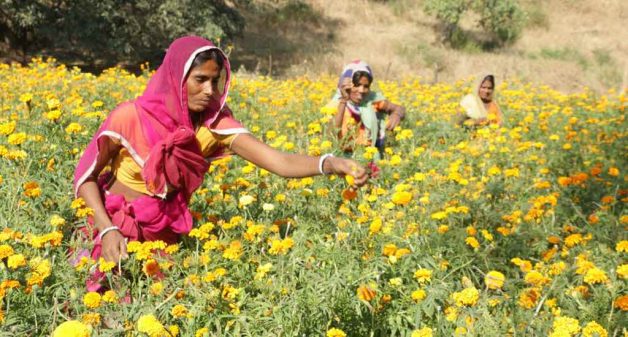 Parwati Bai (35) lives in Aloyakad hamlet of Kaliwas village with her youngest son. A daughter and son are in high school at Udaipur. Her husband Pyarelal died nine years ago. Since then she has been the sole earning member of the family. She works as a cook in the Government Primary School in her hamlet in Girwa block, and gets Rs 1,200 every month.

Girwa, 28km from Udaipur, has a dry climate. Low water retention due to its undulating landscape reduces villagers’ prospects for agricultural income, leading to poverty. Women, who are hit harder by poverty, are forced to take low-paid, unskilled jobs, to augment household income.

The women are also responsible for household chores like fetching water; and works such as grazing cattle do not bring direct income. Sometimes, circumstances forced them to borrow from moneylenders who charge between 60% and 120% interest.

After the women took up cultivation of flowers, there has been a marked improvement in their financial status. With marigold and rose having year-round demand, the flowers that the women grow, floriculture is becoming a viable farm-based income generation activity.

Seva Mandir, a non-profit organization that has been working in southern Rajasthan, initiated Swavalamban, meaning self-reliant, to address gender inequality, break the cycle of poverty and make women self-reliant by empowering them to earn more from their farms.

While Swavalamban project was initiated in nine tribal villages, floriculture was introduced in five of them. There are 13 self-help groups (SHGs) with 250 members, across these five villages. Krishi Vigyan Kendra (KVK) conducted capacity-building trainings through the year for the members.

Floriculture experts trained the women on seedling preparation, use of minimal water for irrigation, pest management, harvesting flowers and in marketing the produce. KVK helped the women grow Pushkar roses and Pusa marigolds that are in high demand in Udaipur and fetch a good price. 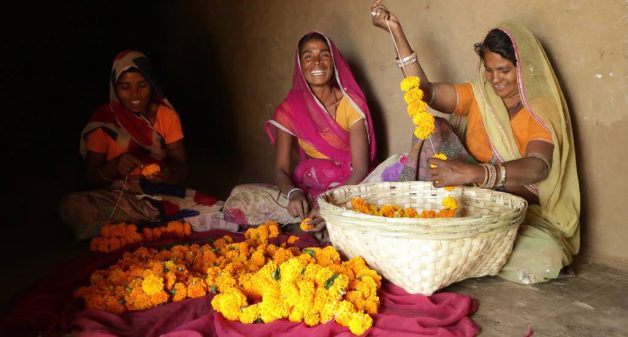 Women farmers who were struggling to make a living off their farms find cultivation of marigold profitable, selling the produce as flowers and garlands (Photo by Manish Kumar Shukla)

Women farmers of Alsigarh, Pai, Pipalwas, Kaliwas and Keli villages in Udaipur district took up floriculture. While nine of them started growing roses, 44 started marigold cultivation. Planting was done in June so that the flowers would be ready for harvest in October. “I did all the work like planting saplings and fencing by myself,” said Parwati Bai.

Seeta Bai of Vada Fala hamlet in Alsigarh village lost her husband Manohar 15 years ago. She lives with her two sons, each with a family of his own. Her sons travel every day to Udaipur for wage work. Seeta Bai grows mustard, wheat, maize, gram, okra and beans for the family’s consumption. If there is any surplus, she sells the same.

Seeta Bai did not grow other crops since she could not protect them from livestock. Floriculture was an ideal alternative. Though she has never grown flowers, she took it up. Dharmi Bai and her husband of Alsigarh village also cultivated flowers for the first time, though they generally grow maize, wheat and a few vegetables.

Each farmer grows flowers in about 0.5 bigha of land. Every two or three days, the farmers harvest 20 kg of flowers and take to the market. The flowering season continues for about three months.

Floriculture provides a stable and increased income for women farmers, as they are able to sell their produce directly in the market. For the first time, Parwati travelled to Udaipur during Diwali to sell marigold flowers and garlands.

Seeta Bai travelled to Udaipur every day to sell the flowers. In Udaipur, places like Delhi Gate, Hathi Pole and Fatehpura had many women farmers selling flowers and garlands, especially during festivals like Gavari Navaratri and Diwali. 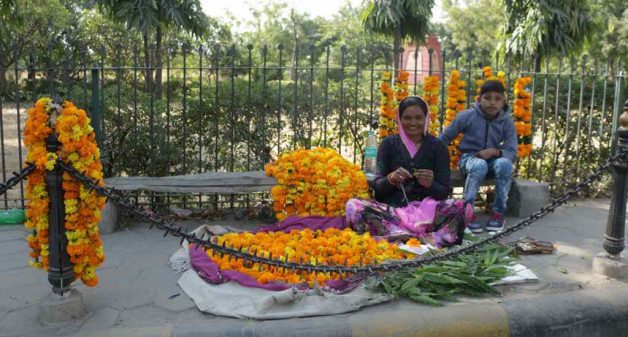 Women farmers find it profitable to sell the flowers directly at the Udaipur markets, especially during festivals (Photo by Manish Kumar Shukla)

In emergency situations, Seeta Bai used to borrow money from her self-help group. But by the end of the season last year, she had earned Rs 9,000. “Earlier I could earn only Rs 1,500 by growing maize; but this year I earned Rs 8,000 by growing marigold,” said Parwati.

Dhanaki (60) lives with her son’s family in Paba hamlet in Pai village. Her husband Bherulal is a priest in a neighboring village. One when of her daughters became paralyzed after an accident, Dhanaki had to sell her jewelry for her daughter’s treatment. “I had to take loans for her treatment and I could not repay, but I have been able to increase my income through floriculture,” she said.

Hakari’s husband Lakhmaram is a farm labor. One of her sons works as a daily wageworker in Udaipur, for a meager income. Hakari used to graze her cattle and grow maize seasonally. “This year I sold marigold for Rs 9,000, which is much more than what I earned with the small quantity of maize I grew,” she said.

Income from growing marigold flowers has convinced Seeta Bai to increase the area of flower cultivation next year. Though Dharmi Bai grew flowers thinking that she was taking a big risk, the income after her hard work at the field has convinced her to continue cultivating flowers.

Used to being farm labor, these women farmers could hardly imagine dealing with vendors. Though flower cultivation has changed their lives, selling the flowers has redefined their roles. They are now adept as sellers and competent in managing vendors.

Jyoti Rajput has a master’s degree in Social Work from Tata Institute of Social Sciences, Mumbai. She works with Seva Mandir as Program Associate – Woman and Child Development Program. Views are personal.

Jyoti Rajput has a master’s degree in Social Work from Tata Institute of Social Sciences, Mumbai. She works with Seva Mandir as Program Associate, Woman and Child Development Program.