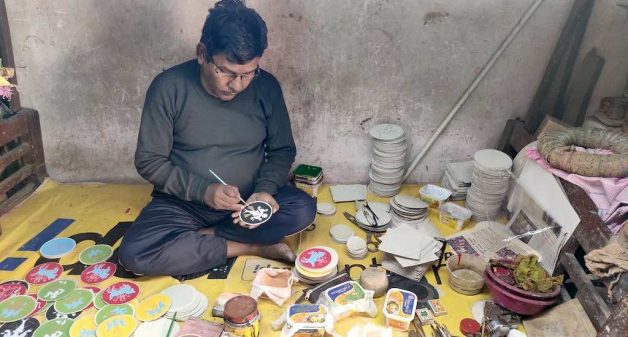 Sital Fouzdar (48), who lives in Bishnupur in Bankura district of West Bengal, was busy creating different incarnations of Lord Vishnu on cards. Two of his family members were assisting him. Sital Fouzdar is among the few practicing artisans trained in the art of making Dashavatar cards, popularly known as ganjifa cards.

The signboard outside his house that also doubles up a shop at Sankhari Bazaar, Mansatola, reads: “House of quality Dashavatar cards and Naqsh cards. An ancient traditional handicraft item of Bishnupur dynasty.”

As the name suggests, Dashavatar cards, also referred as Dashabatar cards, is a game of cards, indicating the ten incarnations of Lord Vishnu, the Hindu God, depicted on the cards. The card game was once the favorite pastime of people living in Bishnupur and other parts of Bengal.

But changing times and the advent of modern forms of entertainment pushed the game to the margins. By adapting the painting method on other decorative items and by reducing the number of cards in a pack, the Fouzdar family that practices it and the government ensure its sustenance.

Making ganjifa cards remains the sole fiefdom of the Fouzdars. Sital Fouzdar claimed to be the 87th generation of the Fouzdar clan involved in making Dashavatar cards, from the time the card game started. It was introduced during the reign of Bir Hambir who became the king of Bishnupur in 1592.

“Our ancestors have been making the cards since Malla kings ruled the region,” he told VillageSquare.in. But some Indian scholars date the origin of the card game to an earlier era. In 1895, noted scholar Haraprasad Shastri mentioned in the Asiatic journal that the game originated in the 8th century.

Proving Sital Fouzdar’s claims, researchers believe that the game was introduced in Bankura during the rule of Bir Hambir, the king of Bishnupur in the 16th century, also the 49th ruler of Malla dynasty. Hambir was a great patron of art, craft and literature.

“Bir Hambir had cordial relations with King Akbar and visited him often. He was fascinated by ganjifa, the card game being played in Akbar’s court,” said Kaushik Bhattacharya, assistant professor, department of anthropology at Bidhannagar College, Kolkata.

The word Fouzdar connotes a military title. “Local kings brought us from our native Rajasthan to fight rival kings. King Hambir recognized the talent of a Fouzdar who was interested more in art and culture than in wars and gave him the responsibility of making Dashavatar cards,” said Sital Fouzdar. The family has been continuing the tradition for generations.

“Hambir introduced the card game in his kingdom with the theme of gods and goddesses,” Bhattacharya told VillageSquare.in. “A member of the Fouzdar family with proclivity for arts designed the cards based on the ten incarnations of Lord Vishnu.”

“A detailed description of an eight-suit pack of Mughal ganjifa with 96 cards can be found in Abul Fazal’s Ain-i-Akbari,” said Bhattacharya. “The Fouzdars made some innovations and increased the number of cards to 120. The game had five players.”

The cards are made with cloth, starch, paint and lacquer. “First, a piece of cloth is folded over and pasted using glue made from tamarind seeds. After it dries, a layer of chalk dust is applied,”Sikha Fouzdar (25), told VillageSquare.in.

“Both sides are evened out with a smooth stone. The cards are then cut into round shapes of two-and-a-half-inch radius,” she said. Then the ten incarnations, namely, Matsya, Kurma , Varaha, Nrusinha, Vamana, Parashurama, Ram, Krishna, Buddha (conch shells) and Kalki are painted on the cards.

But the craftsmen rue that there is hardly any market for Dashavatar cards. “Earlier, buyers used to come from far flung areas to buy the cards. We were also paid in advance and the orders took several months to complete,” said Sital Fouzdar’s elder brother Subal Fouzdar.

“But times have changed. We hardly sell five to seven packs of the Dashavatar cards in a year,” Subal Fouzdar told VillageSquare.in. “People have almost forgotten about them.” The Fouzdar clan hit rock bottom financially when sale of the cards came to a stop a few years ago.

The brothers hit upon the idea of making and selling a separate pack of 10 cards for each incarnation of Lord Vishnu, rather than making the entire bundle that had no takers. “We realized that people were no longer interested in the card game but may be interested in the cards as decorative items,” said Subal Fouzdar.

They made a pack of 10 cards for every incarnation. “People showed interest. We began to get good orders from shopkeepers across Bengal and even Biswa Bangla, the state-run handicraft shops also started giving orders,” said Subal Fouzdar.

He said that one of the reasons for ganjifa cards losing appeal was also its high price. “A pack of 120 cards costs Rs 25,000 to Rs 30,000 since it takes at least a month to make, involving six people at different stages,” he said. “The small packs of 10 cards are sold at around Rs 2,000, which art lovers can afford.”

The Fouzdars have also made Durga Puja pandals with Dashavatar cards theme, to keep the traditional art alive. Even quaint lanterns have been painted with the incarnations of Lord Vishnu to create new market for the age-old craft. Read: Toy makers adapt to markets, add color to fading industry

The family’s younger generation is not interested in continuing the traditional art. “It involves hard work and the result doesn’t justify the labor involved. I have learnt card-making but would prefer a job to this profession,” said Sandeep (22), Sital Fouzdar’s nephew.

The brothers rue that the art would become extinct after them if no efforts are taken for its survival. “It is a wrong notion that we want to keep the card-making process a secret,” said Sital Fouzdar. “We had rather requested the government for infrastructure where we could mentor youth who want to learn the art.”

“We want to keep the art alive but there is hardly any support from the government. We have also requested the government to give us a land for an art gallery where these spectacular cards can be displayed for viewing and learning but nothing has been done,” he said.

But the administration denied allegations of laxity. “The government is keen to sustain by trying to present the art in a new form,” Manas Mandal, sub-divisional officer at Bishnupur told VillageSquare.in. “We train artisans to paint in lanterns and ornaments. The aim is to create a livelihood for them and also ensure the art doesn’t fade away.”