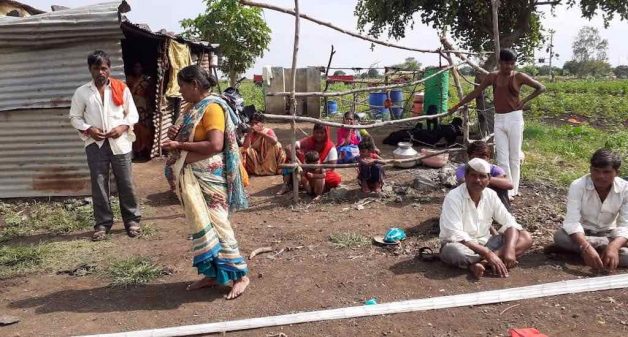 Sada Dake was resting after tending to his 2.5 acres of land where soybean crop flourishes. The land did not belong to him originally. He had encroached on it. The government legalized Dake’s encroachment three years ago, after a long battle by Dake.

Privatization of grazing land is often decried because it favors the rich and deprives the poor. Beed district in the Marathwada region of Maharashtra presents a peculiar case where encroachment of grazing lands has favored the landless.

Pastoral lands have been playing a significant role in the lives of the rural poor in India. Access and usage rights for it lay with the community. In Maharashtra, these pastoral lands are called gairan, gavran, malran or padik zamin.

As these grazing lands started losing significance due to various factors, landless and nomadic communities encroached them. Land rights movements have led to government regulations that allow legalization of these encroachments.

The extent of gairans or grazing lands in Marathwada is 240,800 ha, spread across 7,786 villages. Thus, each village, including Beed, has an average of about 30 ha of gairan. Landless communities in each village, generally belonging to backward castes, constitute 10-15% of the total population.

Many landless communities have been illegally encroaching public lands, residing and cultivating in these lands over the past 40 years. Maharashtra passed a government regulation (GR) in 31 March 19878 to legalize encroachments. But the eligibility criteria regarding land, community and income were many that only a few people benefitted. Also, the encroachments that took place after 1978 were considered illegal.

By 1990, around 2,400 ha of gairans had been encroached in Beed. Then a GR passed in 1991 made the encroachment of gairans that took place between 1 April 1978 and 14 April 1990 legal, benefitting minorities and landless communities.

At present, with some exceptions, the majority of the landless communities in villages, through land rights movements, have invaded the gairans in the hope that a new GR would be introduced and the land will be transferred to their name.

“People who were able to turn their encroachment to legal land through GRs was less than 20%,” Ramesh Bhise, head of Janvikas Samajik Sanstha, a local NGO based in Beed, told VillageSquare.in.

Janvikas and other NGOs have been leading land rights movement in this region from the mid-1990s. Janvikas has fought for the land rights of more than 55,000 families.

In the beginning, land rights movement turned into a big conflict within villages, and involved police complaints. However, majority of the villages have now accepted the encroachment. In a few villages where a dominant community holds power, villagers view the encroachment as illegal, and oppose it.

Primarily Dalits and other landless communities encroach on grazing lands. One of the communities that has benefitted by such encroachment is Paradhi, a traditional hunter-gatherer community.

“Back in the days, we had to move from place to place with family and poultry. Now we can send our children to school and get benefits from government schemes,” said Kadya Shinde, a Paradhi, who has encroached half an acre of land.

“The land is an important asset, and if it lies idle, it is better we live on it,” Shinde told VillageSquare.in.

Being a nomadic community and carrying the stigma of criminal tab given by the British, Paradhis have been isolated from the development agenda. Hence they did not own any land and lived far from villages. Poverty and illiteracy had sealed their fate for centuries.

Shinde, along with other members of Paradhi community in Dhakefal village in Beed district, now cultivates the occupied land. They are able to sustain a livelihood only because of encroaching the grazing land.

Other than the Paradhis, many landless communities of Scheduled Caste (SCs) category, especially Mahar and Mang too have encroached the grazing lands. Traditionally, these communities worked on affluent people’s farms as daily wage workers. Deep-rooted caste system provided minimal opportunities for their growth. The dominant communities in villages shaped the village rules.

Sada Dake, belonging to Mahar community, had fought for legalizing his encroached land. “Now we have got dignity, and with land rights, we have some status in the village,” Dake told VillageSquare.in. The families of Dake and 12 others, historically landless people, settled in the outskirts of Dhakefal village decades back. Each family has a legal entitlement of 2-3 acres of land now.

In India, common property resources are declining in area as well as in quality. The same is the case with grazing land in the study areas of Beed.

For cattle owners, grazing lands no longer serve the purpose. As a result, these lands are neglected and remain barren. The reasons for the decreased dependence are multifaceted and intertwined with each other, the most significant being decrease in number of livestock due to lack of water and fodder.

Many villagers had sold their cattle because of drought. Around 50 cattle had died last year in Dhakefal village, since drought had to led to inadequate fodder and water. Read: India needs more fodder to prevent cattle starvation

Villagers are shifting towards keeping selective and profitable livestock. Maratha community that generally owns cattle in this region reported lowering their livestock number on purpose and shifting to other occupations because of the drought.

Lack of conservation efforts by the government and communities has caused severe deterioration of the quality of grasses available for cattle. One of the villagers pointed at the invasive parthenium plant growing in plenty.

“These plants have grown in major useful tracts of common as well as private lands to such an extent that the animals do not have palatable grass. The lands are so degraded that they hardly suffice any livelihood need,” he said.

It was very evident from the discussions in the villages that other public utilities such as a community center, schools and cremation ground held more importance to the villagers than on conserving grazing lands.

Privatization of grazing lands needs to be assessed in two contexts, namely, equity and sustainability. In the present form, neither of the goals is met. In the absence of any legal regulation, equitable distribution of lands is in question.

Further, it becomes imperative to understand what is more important – legal entitlement of grazing lands for landless people or conserving these lands for common use?

Land ownership rights of the gairans can improve the socioeconomic status of the historically oppressed communities. However, in the light of decreasing commons, some institutional arrangement for equitable and sustainable distribution of commons is the need of the hour.

Rashmi Komal is a researcher and Kailas Kokare is a research intern at VikasAnvesh Foundation, Pune. Views are personal.