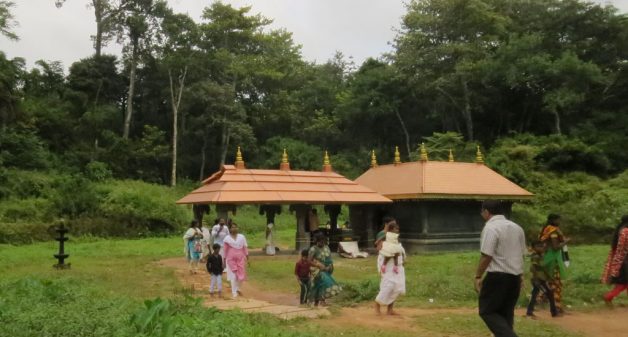 As devotees came to the small Shiva temple in Mani Kavu, Prabhakaran, a volunteer, kept an eye on them. Though devotees know that they should not venture into the dense grove of tall trees behind the shrine, Prabhakaran wanted to ensure that none of the plants and the trees in the sacred grove was disturbed.

Mani Kavu is a sacred grove near Manivayal village in Kalpetta administrative block of Wayanad district. Though the trees grew to a large girth and height, they were never cut. This ensured a good microclimate for the surrounding villages.

A few decades back, some people made a sale of the trees, leaving the nearly 35 acres of forest almost barren. About 1.5 acres of sacred grounds behind the temple were left untouched for fear of divine repercussions.

The local community took the initiative to restore and conserve the forests to avoid deterioration in the natural climes. With support from a few organizations, the community has been ensuring that their conservation efforts would bring the sacred grove to its original glory.

The centuries-old shrine known as Sree Mani Kavu Shiva Maha Kshetram attracts considerable number of devotees. Though the forest was degraded, the 1.5 acres of land behind the shrine was left intact, because it is considered the most sacred part of the grove.

One of the temple administrators said that they have never had water problems like in some other parts. The community attributes the spring flowing from this sacred area, where it originates, for the availability of water.

“It is pure water. We do not enter the dense forest behind the shrine, because the common belief is that the water would become contaminated if we do,” he said. The myth is that snakes prevent anyone from entering the place.

“We don’t cut trees in this area. Our deity protects the kavu (grove),” said Prabhakaran. This belief applies to sacred groves across Kerala, helping in conserving many endemic species of trees and plants. In Mani Kavu, one can see tall trees such as chengurudhi mentioned in the IUCN list, in this sacred spot.

The community became interested in restoring Mani Kavu when Meenangadi panchayat, under which Mani Kavu falls, took steps to become a carbon neutral panchayat. With growing awareness about the need to grow and conserve trees, the villagers rallied around.

The fact that the grove is no longer a private property but under the Malabar Devaswom Board since 1994, worked in the community’s favor. Thomas Isaac, the finance minister of Kerala, and assembly representative of Sultan Bathery constituency in Wayanad district, sanctioned support from his MLA funds.

The temple committee approached the Community Agrobiodiversity Center (CAbC) of M. S. Swaminathan Research Foundation to help them with the restoration work. As the parameters for selecting rare, endemic and threatened (RET) species recovery project matched, Mani Kavu was selected as an RET site.

The trees in the sacred part of the grove had not been documented since no one was allowed to enter. Hence CAbC chose 80 species from the RET list prepared by the Kerala Forest Research Institute for the species recovery program.

The team chose only native varieties, most of the species being endemic to Western Ghats. The species are of multiple utilities. Many of the species planted in Mani Kavu are listed as endangered and vulnerable in the IUCN list, thus helping in their propagation.

Vateria indica, a species endemic to India and used in Ayurvedic medicine, Boswelia serrata, used as a mosquito repellant, Terminalia arjuna that has medicinal and timber value, Hopea parviflora of timber value, Vatica chinensis endemic to Western Ghats are some of the tree species planted in Mani Kavu.

“We introduced some sacred species mentioned in our epics, given that we are restoring a punya vanam or sacred grove,” Jithin. M of CAbC, monitoring the project told VillageSquare.in. “For example we have planted the ashoka tree (Saraca asoca) that is featured in Ramayana.”

Ouseph said there are irumbagam or ironwood trees, endemic to Western Ghats, and  the logs of which were used as railway sleepers. He visits the grove regularly to ensure that the planted saplings are protected from natural elements and grazing animals. The forest department also monitors the conservation work.

The trees have attracted many fauna to the grove. “It is too early to see any major impact because of the trees,” Prabhakaran told  VillageSquare.in. “We know that it would help us in the long run, like raising groundwater levels.”

With predictions that about 10% of the threatened trees species in India would be lost in the near future, botanist Prema. R find such initiatives worth emulating. Conservation would also help in scientific study of plants as well as identifying more medicinal uses.

Showing the expanse of the grove, where the newly introduced trees have grown consideraly, Ouseph said that new visitors are unable to believe that it used to be a barren land once. The temple committee hopes to see the entire grove restored soon.