How some FPC balloons can become durable high flyers – II 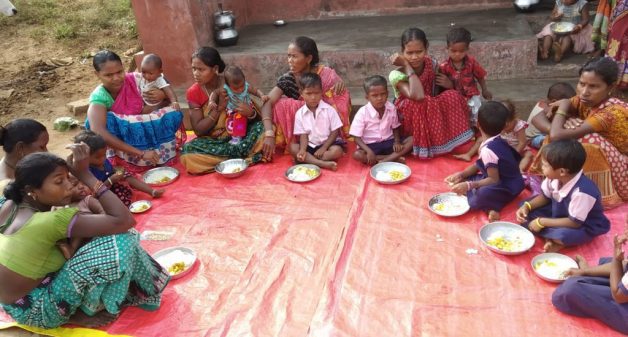 As anganwadi centers are inaccessible, women cook in a community kitchen with anganwadi ration, and feed children and pregnant women with nutritious food (Photo by Rakhi Ghosh)

Champa Kadraka of Karadapanga hamlet in Odisha’s Rayagada district is happy that her daughter Ambika has gained weight, at least a little above the yellow zone. Champa Kadraka had no idea about the yellow zone or red zone in the nutrition chart displayed in the Anganwadi or day care center.

In the last Village Health and Nutrition Day (VHND) she had attended, she learnt that red zone indicated severe malnutrition and yellow indicated the risk of malnourishment. The Anganwadi worker who had come to the village had marked her daughter as undernourished and suggested feeding her with nutritious khichdi served at the nearby Anganwadi.

Champa Kadraka knew it was not easy for her to cross streams and forests daily to reach the Anganwadi to get her daughter to eat khichdi. Financial status at home was not good to provide nutritious food to Ambika as the couple is dependent on daily wage labor and forest produce. “When we don’t get sufficient food to fill our stomach every day, how can I get nutritious food for my daughter,” she rued.

But padaprusti karjyakram or spot feeding program, has solved her worries. Now mothers like Champa Kadraka join together to cook and feed their children at the community center, with ration provided by the anganwadi center.

Sikshasandhan, a non-governmental organization working in the field of education in Odisha joined hands with Azim Premji Philanthropic Initiatives (APPI) and launched padaprusti program in December 2018. Before launching the program, the team conducted a study in Muniguda block to bring children to school and Anganwadi centers for pre-school activities.

“During our study in Karadapanga, Turukupa and a few other inaccessible hamlets, we found that the need for food was more than the need for education at that moment,” Ananta Samanta, project coordinator of Padaprusti program, told VillageSquare.in.

Most of the children ate only jau (rice pulp). There was no side dish except a pinch of salt. “There were five children in the yellow zone and eight pregnant women and lactating mothers who were anaemic in a hamlet,” said Samanta. “Due to a lack of nutritious food, the children were thin and malnourished.”

When the team contacted the nearby Anganwadi center to check about the children’s daily meal, they found out that people had to cross rough terrains and streams every day to reach the Anganwadi, since the hamlets were on hills. For the same reason, the Anganwadi workers could not reach the hamlets to counsel parents to send the children to get food.

In remote areas, people live in hamlets scattered across the hills, sometimes inside forests, making it difficult for parents to send their children to Anganwadi centers. Bada Kandulapada, a tribal hamlet of Thuapadi under Sardhapur panchayat, is one such hamlet where the team found the need to provide food to the tribal children.

Sikshasandhan and APPI discussed the issue with officials in Integrated Child Development Scheme (ICDS) in Muniguda to help in identifying pada gaon (hamlets) that they could approach, convince and introduce padaprusti karjyakram to feed deprived children.

“We approached the Child Development Project Officer (CDPO) in Muniguda block to start a common kitchen in these hamlets where parents could bring provisions from Anganwadi centers and prepare food for their children. Pregnant and lactating mothers could also join them and have their food together,” said Samanta.

Starting a spot feeding program was not easy for the team, as it was not easy to convince the villagers. As most of the villagers were either daily wage laborers or dependent on forest produce, they were not willing to forego a day’s wage to bring rations from the Anganwadi center.

Initially, the team members helped in bringing the rations, as it was difficult for the women to carry the food items by themselves. Later, the male members joined and started bringing provisions once a month from the Anganwadi center. The mothers started cooking at the community kitchen, to feed the children, as well as pregnant women.

“Anganwadi provides only the rations. We provide the other items such as firewood, container and locally available vegetables,” Amulya Kadraka, a father, told VillageSquare.in. “We feel happy when our children eat to their fill and also get to eat egg.” Children in these remote villages were completely deprived of getting egg, oil and pulses.

The intervention in Karadapanga village helped the team understand that there are many young ones like Ambika, in need of nutritious food to overcome malnutrition. Due to lack of road facility, grains, pulses and eggs are not distributed to these children, which is one of the reasons of their poor health conditions.

The National Family Health Survey (NFHS) 2016 data of Rayagada district reveals that there are 50% children between 6 to 59 months suffering from anaemic conditions; while the percentage of anaemic pregnant women was 52.

“As most of the hamlets in Rayagada district are in inaccessible and inside forests, government system that provides nutritious food to children of the marginalized fails to reach them,” Anil Pradhan, secretary of Sikshasandhan told VillageSquare.in. “In one year of padaprusti, many children in the intervention hamlets have started showing signs of improvement.”

Besides nutritious food, clean drinking water is also provided for the children. The children are also taught about hygiene. Padaprusti that was initially started in five tribal hamlets, has now been extended to nearly 100 hamlets of 10 panchayats in Muniguda block. “There are 1,090 such hamlets in Muniguda block that need immediate intervention,” said Samanta.

One of the major aspects of Anganwadi centers is also preparing young children between the age of three and six for school. Apart from providing nutritious food, the Anganwadi worker follows Nua Arunima booklet, to engage the children in pre-school activities with different pedagogy, to prepare them for school.

“The children of these hamlets are not being prepared for school now. There is a plan to start a school readiness program. Then the whole objective of development of a child from the perspective of health and education will be fulfilled,” said Pradhan.