How to contain spread of pandemic 2019-nCoV? Myths vs Facts!

Farmers in central Indian tribal belt have adopted various farm-based livelihoods successfully, through Lakhpati Kisan, a program that helps boost their income in a sustainable manner 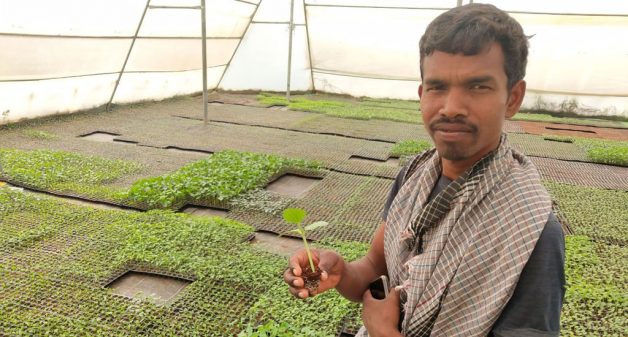 Raising saplings in a polyhouse nursery has made Rajendra Tudu a successful agripreneur, besides ensuring a steady supply of saplings to farmers (Photo by Jyoti Kanitkar)

Rajendra Tudu, a Santhal tribal farmer, of Nagdi village in Churchu administrative block of Hazaribag district in Jharkhand is a new generation agri-entrepreneur. He has started a nursery business, in addition to the farming he has been practicing in his small piece of land.sexyxxxsexyxxx.ccsexyxxx

We learnt about him and his work by chance. On our way to visit Oria village in the same district, we came across a board on the road side. Among other information, the board that said Mission 2020: Lakhpati Kisan – Smart Villages, had Rajendra Tudu’s name and picture.

Our curiosity took us to his nursery, and what we observed was truly inspiring. As our visit was unannounced, Rajendra had not been ‘tutored’ to give rehearsed, desirable answers that are normally reserved for visitors from the city.

He was working in the nursery that he had nurtured over the last three years. There were workers engaged in daily chores, a representative of a seed company on a business visit and a few customers. It was this ‘business as usual’ we witnessed and have attempted to present here.

Rajendra’s story is of a person’s journey of raising not just a nursery but also hopes of many fellow tribal farmers.

Initial contacts with professionals of Society for Upliftment of People with People’s Organisation & Rural Technology (SUPPORT) and subsequent interaction with a team from Collectives for Integrated Livelihood Initiatives (CInI) facilitated his becoming an entrepreneur in his own way.

Rajendra has studied up to class seven. However, his journey so far has proved that formal education and schooling has nothing to do with success and achievements in life.

The teams, in partnership with other organizations and the government, were implementing Lakhpati Kisan, a program to improve the livelihood of one lakh tribal farmers and help them earn Rs 1 lakh per annum. The program is being implemented in Jharkhand, Odisha, Maharashtra and Gujarat.

Rajendra Tudu began with a greenhouse for preparing saplings in the nursery, to sell the same to nearby farmers cultivating vegetables. The attempt did not succeed. When the saplings did not survive, he realized that even a greenhouse did not help in maintaining a uniform temperature during the peak months of summer.

Guidance from SUPPORT and CInI teams, exposure visits and trainings boosted his confidence to raise a nursery of vegetable plants. However, the 16 m x 18 m polyhouse nursery required an investment of Rs 1.20 lakh. Should he or should he not take the plunge?

Rajendra decided to take a leap of faith. Half of the required amount of Rs 3 lakh was a grant from the CInI –Tata Trusts program. He paid Rs 30,000 from his savings. He received the remaining Rs 1.20 lakh as a loan from Rang De.

In our interactions, Rajendra proudly mentioned that he cleared the three-year loan of Rs 1.20 lakhs (Rs 1.45 lakh repayment with interest) in two-and-a-half years!

Rajendra is knowledgeable about his business which is in the third year of its functioning. With 102 saplings in each plastic tray, the nursery bed has a capacity to raise one lakh saplings in each cycle. In kharif season, he can have five cycles of saplings raised from seeds. He raises saplings like kheera, bitter gourd (karela), bottle gourd (louki), watermelon, kaddu and so on.

Rajendra is finance savvy! He fixes the price of saplings depending on the vegetable type. For instance, for bitter gourd, it is Rs 5 per sapling because the vegetable fetches Rs 40 per kilogram in the market. For some variety of vegetables, it is Rs 1.25. Assuming he can raise 5,00,000 plants in kharif and another 1,00,000 in rabi (summer) his annual sales revenue could be between Rs 6 and 10 lakh.

He told us that the profit percentage is 50. More than 10 members from his family and neighborhood, most being his extended family, are getting work in the business. The work is intensive, especially in preparing the plastic trays that use coco peat instead of soil. He purchases coco peat from Ranchi. Women members of the household help in cleaning the coco peat before use.

When we walked into Nagdi village unannounced, Rajendra was interacting with some customers who had come to buy 3,000 saplings. We asked him his plans for future and the nature of competition. His response was a learning for us!

“Yes, after seeing my success, three or four polyhouses for vegetable nursery plants have come about,” he said. “There is no competition. When I don’t have certain vegetable varieties, I direct my customers to them. They do the same. We exchange notes on difficulties that we face in raising saplings.”

Rajendra requested CInI to help him build another polyhouse nearby so as to increase his capacities. CInI didn’t agree! “They said that I should let some other person start this business in another locality and that I should help him.” Rajendra readily agreed!

India and Jharkhand of 2020 needs thousands of the likes of Rajendra Tudu! He is a lakhpati kisan in the true sense.

Ajit Kanitkar is a member of the research team at VikasAnvesh Foundation in Pune. Prior to this, he worked at Ford Foundation and Swiss Agency for Development and Cooperation, both in New Delhi. He taught at Institute of Rural Management, Anand, during 1992-1995. Views are personal.