Members of self-help groups, trained in legal aspects, ensure that villagers, especially women, get their entitled rights without resorting to money and time-consuming legal route 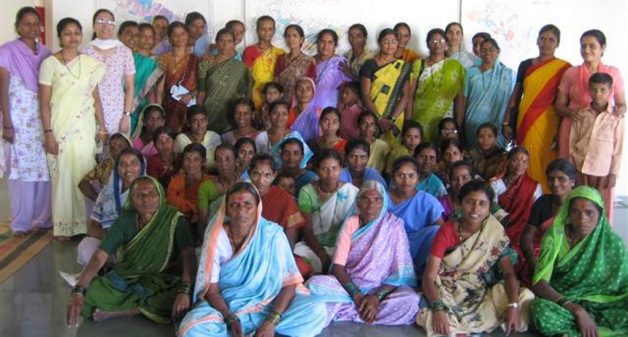 Alka (26), was married at the age of 19, to a florist in a village near Khed – a town about 50 km from Pune. She has studied till class seven. After marriage, she shifted to her marital village. She has two daughters aged six and three.

After five months of enduring harassment meted out by her parents-in-law, Alka left the house, taking her daughters along. When she heard about Jankars, promoted by Chaitanya, a development organization based in Rajgurunagar of Khed taluk in Pune district, she approached them to get her issue resolved.

Alka’s is one of many cases that women members of the local community trained in legal matters help solve amicably without approaching the courts.

Jankar in Marathi and Hindi means one who is informed. Jankars are community resource persons with legal knowledge. While working among women, helping them establish and develop self-help groups (SHGs), Chaitanya’s team learnt about abuses against women, prompting them to start the Jankar program.

In the Jankar program started in 2000, Chaitanya chooses women with basic literacy skills and trains them in laws relating to women and counseling skills, to resolve family problems and to spread awareness about women’s rights. The training is for a year, at the end of which the women have to write an examination.

Only interested women, who are also part of the SHGs, are chosen to be trained as Jankars. Awareness about the Jankars and that they could be approached for domestic issues, was created with the help of SHG members, the trained Jankars and even police personnel.

Abuse against women can be of various forms like domestic violence, emotional abuse, or that caused due to extreme alcoholism. These abuses have their implications on the women and the society as well.

Awareness of the varied forms of abuse and the consequence on the victims and the society is very less in the India, especially in rural India. Some of the abuses are so common that the women do not feel the need to approach the enforcement system.

Though there are laws to deal with abuses, it is not easy to understand the laws. The legal language in India is often very complicated even for the educated. The uneducated are naturally very reluctant to even consider approaching a court because of the high cost, the jargons and the time required.

So villagers resort to filing cases in court only for significant or severe cases. As for cases of abuses, women and men continue staying in the current situation.

In courts, there is always a large number of cases pending. One needs to make frequent visits to the court once a case is filed. There will be multiple rounds of questioning and a large amount would need to be paid to the lawyers. There are hardly any quick redressal methods.

The Jankar program helps in developing the capabilities and skills of the women of self-help groups and address their self-identified needs. It was established on the core idea of reducing the costs that would be incurred if one resorted to a legal route, by resolving disputes at the village level.

When a person comes to the counseling center, he / she is required to fill out forms to give the complainant’s personal details, nature of problem, etc. Details of both the parties are noted. Both parties concerned are asked to be present individually on separate days and then together too.

The Jankars believe that sitting together and putting forth the views clears most of the problems. If the other party is unwilling to come for counseling, the Jankars, with the help of the local panchayat, visit them at their house.

There are follow-up sessions where counseling and further discussions take place. The issue is resolved in the last session. Sometimes the parties do not agree on the proposed settlement. In such a situation, the case is taken to court.

The cases in the Jankar program take up less time and reduces the financial pressure. People are often anxious to approach courts and suffer on various counts. Jankar program overcomes these barriers and solves the cases with an individualistic approach.

As both the parties are counseled separately as well as together there is consensus. An issue is considered settled only after both the parties and their families agree to the settlement. It is made binding with both the parties signing it in front of witnesses who could be community people, panchayat or even the police.

The Jankars build a rapport with government officials to obtain information and facilitate the implementation of government programs such as Domestic Violence Act 2005, Criminal Law Act Amendment (2013) and Tanta Mukti Abhiyan.

The Jankars hold regular training programs for the women who are members of self-help groups (SHGs). The training programs include sessions about the legal system, the laws, latest updates and procedural formalities in filing a complaint.

The women then inform their acquaintances about the laws, creating a chain of women who are well aware of gender rights and laws about the same. Regular exams and tests are also conducted so that Jankars are up to date with the current gender laws.

Deshpande Wada is always bustling with such cases throughout the day. Some are minor cases such as altercations between family members, especially spouses, and serious cases such as molestation and custody of children. Only some cases have reached the courts.

The Jankars maintain documents such as copy of the marriage certificate, copy of FIR filed, proceedings papers with the minutes of the meetings and discussions held at the police station, and the settlement papers that have details of the final decision and annuity to be paid, if any, to maintain transparency. The parties are also copies of the papers.

The Jankars have also published a Marathi information booklet – Kayda Jankar, which explains the various gender-related laws in simple language. Handouts with the latest additions or modifications are regularly distributed. Women, as well as men, approach the Jankars seeking advice on other matters pertaining to documents, assets and finances.

India requires more initiatives like the Jankar program that can guide, inform and help people solve their disputes at local levels.

Vaishnavi Pawar is a researcher at VikasAnvesh Foundation in Pune. Views are personal.