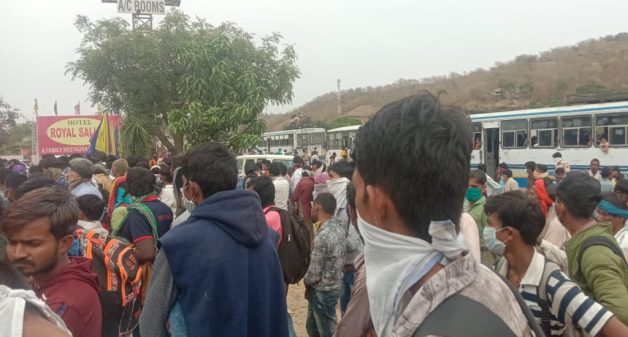 For the last ten days or so, state governments have been announcing movement restrictions and advisories about not moving. The lockdown trial euphemistically titled Janata Curfew was observed on the 22nd of March. Trains were stopped from that date onwards.

A day later, borders between states were closed and on the 24th, the Prime Minister announced nationwide lockdown. Throughout this period the PM in his various statements had been advising people to stay where they were and not move.

However what has happened is nothing short of a combination of events leading to a major tragedy in the offing.

A huge proportion of informal sector runs on the back of migrant labor. South Rajasthan for example, contributes migrant workers to construction, textile, farm, hospitality and several other sectors.

They migrate not only to Gujarat but also up to Mumbai and Pune in search of employment. As the cities started closing, informal sector operations ground to a halt. Unsure of their income streams and of their safety in view of exposure, the workers started returning to their native.

However once the movement restrictions were imposed, they were caught unprepared. With the lockdown, those in transit were in deep trouble. They had left the places where they worked and were caught in between.

The tragedy of those working in farm sector and informal sector in smaller towns of Gujarat is similar. They worked in small groups in towns scattered all over. When the scare of the disease became big, their own sense of insecurity and the urgent and anxious calls from home made them leave.

Again, they simply got caught in the process of movement restrictions and lockdowns. As is wont to happen when formal transport becomes difficult, hundreds persuaded cargo truckers and climbed on to the trucks.

As one observes, thousands of poor people consider traveling on a truck a normal mode of moving between towns. It is cheap and convenient because they can board and get off wherever they want. But with movement restrictions, the police forced them to get off.

The result is alarming. There are three main border points between Rajasthan and Gujarat. The most busy and fashionable point is Ratanpur on the national highway. Then there is a crossing in Palanpur district.

And eastwards, there is a border connecting Dahod district in Gujarat with Bhilwara district in Rajasthan. At these various border points between Rajasthan and Gujarat, literally thousands of workers have been stuck without any means of proceeding towards their homes.

They are simply stranded on a highway, standing and not knowing what the future holds for them. They do have some money on them but there is no food available, so they have been surviving on Parle G biscuits for more than two days now.

With persuasion, the Rajasthan government sent a few buses to ferry some passengers from Ratanpur to Udaipur but the fate of those stuck on the other borders is not clearly known. And more people are pouring in from a large number of scattered small towns and villages wishing to go home.

Aajeevika Bureau, an NGO that works with migrant labor persuaded the district authorities in Gujarat to help these people. Collectors of the border districts have tried by sending some food stuff to these people but the numbers are large, growing and not difficult to estimate.

The worst problem is that all those who can help them, the civil society, farmers organizations and others are all locked in and not allowed to move on the ground to help these people.

Some brave it and walk tens if not hundreds of kilometers. Their own village does not welcome them at all. They are seen as harbingers of the epidemic, carriers of the virus. One such person reached his home only to be beaten up by the villagers and not permitted to enter.

Another person who had reached his village a week ago and was resting at home was whisked by police on a rumor that he is an infected person! That he was released later is a different issue but the image of police and the perception of being picked up by police is so negative that the man is now in virtual terror.

Even under the most ordinary of circumstances, the life of migrant labor at destination is nothing to write home about. They have to live in terribly crammed hovels, often even without a roof over their heads, unable to obtain basic amenities of toilet and bathroom, forget clean drinking water and cooking space.

In this time of virus scare and very tough government steps, they seem to have got the shortest end of the stick. We do hope that the government of the host as well as the home states realize that migrant workers run the economy in both the places, that they are not criminals, that they have a right to return home and that not all of them are carriers of the virus.