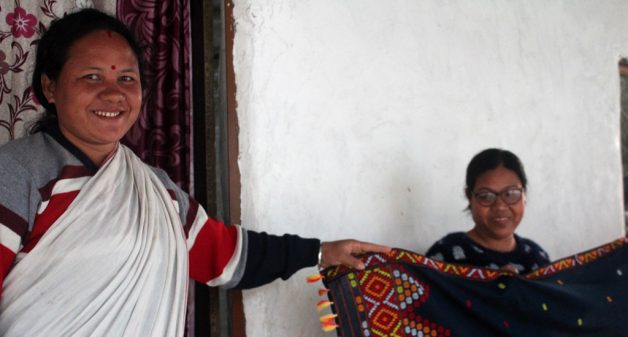 Like every year, Parneeta Taye and Namoli Mili, have been working on new motifs and patterns of mekhela chador, the traditional Assamese dress of women, to get the same ready before Bihu festival. But unlike every year, this time they have been forced to finish the weaving in their family loom.

“Earlier we would gather in our village weaving hall and do it in groups, but now keep distance since they say some virus can kill us if we come in contact with infected people,” Parneeta Taye, secretary of Gyandeep Weaving Center, in Ligiribari village, told VillageSquare.in.

Given the enforcement of social distancing, the Mishing women, who weave traditional clothes in their looms in groups have started weaving at home in their individual looms.

Mishings are the second largest scheduled tribes of the districts in the plains of Assam. The total population of Mishing community (as per Census 2011) is recorded to be 5,56,296. The tribal population is concentrated in Lakhimpur, Dibrugarh, Sivasagar, Jorhat, Majuli and Sonitpur districts of Assam.

Parneeta Taye and Namoli Mili are Mishings and residents of Ligiribari. Ligiribari village in Sivasagar District is home to around 40 families of Mishing tribes. Male members of the community practice agriculture to make ends meet. They grow paddy, mustard, sweet potato, pulses and seasonal vegetables.

Mekhela chador(pronounced as shador in Assam), the traditional dress of women in Assam, is almost like a two-piece saree. However, its design, colors and weaving pattern differ from tribe to tribe. In Mishing community, the women also wear sumpa (a piece of cloth worn around the waist), guluk (worn around the breasts)and hura (a kind of head dress)on the mekhela chador.

Untangling the crimson and ochre cotton threads in a loom, Namoli gave rest to her hands after three hours of continuous weaving. She then took out from her loom, the newly woven traditional black mekhelawhich has green, ochre, crimson, lemon yellow and white colored motifs on it.

“This is for Bihu. This is our traditional design. I am just finishing it for a pre-placed order. I am not going to make more pieces because there won’t be any selling now,” Namoli Mili, vice president of Gyandeep Weaving Center, Ligiribari told VillageSquare.in, referring to the nationwide lockdown.

The weaving is done only by women of the house. Apart from weaving their own clothes, they also do it commercially for orders, expos and for selling in the market. The market sale is limited since they reside in villages.

A typical Mishing house is a hall with no partition walls. Mishings are known for constructing their houses on 5 feet high raised platforms with split bamboo floors and thatched roof. Mishings have a family loom beneath their houses. The loom in a Mishing house has a traditional weaving machine and a stool to sit on.

Like other weavers of Assam, for Mishing community, most of the business happens in the months of March and April, ahead of the Bohag Bihu (14-20 April this year) festival. But this time the scenario is different. Due to national lockdown and the obvious fear of loss in their business, the women weavers have restricted themselves to weaving limited pieces.

“This epidemic is a challenge for everyone including the tribes residing in villages, who keep preparing and look forward to Bihu for months; it is disheartening,” Madhab Das, Assistant Tourism Information Officer, Sivasagar told VillageSquare.in. “This is our main festival celebrated throughout the state, regardless of caste and tribe, and a good opportunity for craftsmen and women.”

Jyoti, another weaver from the village was sitting alone in the community weaving center, with seven empty looms near her. The hall has a total of 14 machines. All the looms have fallen silent since the outbreak of COVID-19, as the women had started weaving at home. She had come to collect her green threads which she ran out of at home.

“We are now weaving only for ourselves and our family members. We are weaving in our personal loom at home only,” Jyoti told VillageSquare.in. “We don’t know when we would be able to go to our community weaving center and begin weaving there.”

“One set of mekhela chador, if it has motifs, gets us Rs 1,500 to 2,000 while the silk one gets us around Rs 3,000. We don’t weave muga silk here, for that is quite expensive. March and April are the months we keep looking forward to but maybe god planned something else this time,” said Parneeta.

“We have closed the weaving center for now, as per the instructions of the prime minister,” Parneeta told VillageSquare.in. “Health of our people is more important than money.”

With the worldwide scenario worsening due to coronavirus, machines in the weaving center of Ligiribari await their women weavers, who are used to weaving in groups, but have been forced to weave by themselves now.