While the lockdown left migrants stranded at destination sites, their children staying in seasonal hostels had to be sheltered with relatives or had to fend for themselves 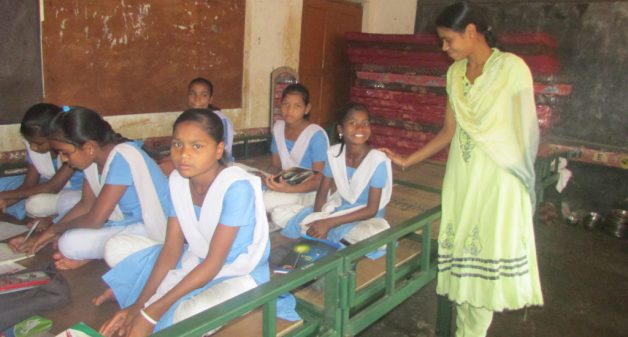 Deepa wants to see her parents desperately. “I miss my mother whenever I hear any news regarding coronavirus. I develop fear and anxiety,” 10-year-old Deepa Baralebidia said in a choked voice over phone.

Her grandparents are weak and old. For the last few days she has been waiting for the return of her parents, who migrated to Hyderabad. Due to the nationwide lockdown, it is not possible for them to return home.

Villagers who had migrated to other states for work, and stranded due to the lockdown, had to plead with relatives to provide shelter and food to their children, as the school-cum-seasonal hostels where the children  were studying had to be closed.

Dambaru Bhoi and Kaushalya, parents of 9-year-old Jyoti Bhoi, studying in the same school-cum-seasonal hostel as Deepa, got disturbed when they received a call on their mobile phone from the headmaster. They had migrated to Hyderabad to work in a brick kiln leaving their only daughter in the seasonal hostel.

“On 22nd March the headmaster called and informed about state government’s order to close all seasonal hostels due to COVID-19 pandemic. He told us to ask her local guardian to take her from the hostel since it would be closed within a day or two,” Dambaru Bhoi told VillageSquare.in.

“It was difficult for us to convince our relatives to keep our daughter till the hostel reopens,” said Bhoi, over phone. Finally Jyoti’s maternal uncle agreed to take her home.

The 21-day countrywide lockdown and sudden decision to close seasonal hostels put migrant parents in a difficult situation as they could not return to take their children home. Some parents requested their relatives to give their children shelter; others sought the help of acquaintances.

But the plight of children who have neither relatives nor family members to look after them was tough. These children returned to their villages to stay alone in their homes as parents were stuck in other states.

Activists working on migration issues in Balangir district said that state government should have made alternate arrangements for these children in this emergency situation.

Due to unavailability of work, every year lakhs of poor people from Odisha’s migration-prone districts, namely, Balangir, Kalahandi, Nuapada and Bargarh, migrate to southern states to work in brick kilns. The seasonal period of their migration is from October to May.

During the migration season, entire villages become empty as parents migrate with their children, leaving only the aged and the disabled behind. Parents take children along with them to engage them in household and brick-making work.

Understanding the gravity of the situation, in 2012-13, the state government opened seasonal hostels for the children of these migrants and encouraged them to enroll in these hostels to continue their studies. At present, there are 9,000 children accommodated in seasonal hostels in these four districts. In May, when migrant parents return to their villages the children stay with their parents. (READ: Odisha’s seasonal hostels help curb child migration and child labor)

But, this is for the first time that seasonal hostels were suddenly closed due to COVID-19 pandemic and the fear of the virus spreading. When parents were informed about the sudden closure of the hostels, it became difficult for them to convince their relatives and friends to give shelter to their children.

Khem Das, the headmaster of Government Upgrade High School of Mendhatal village, in Komna administrative block of Nuapada district, narrated the same story. When he contacted migrant parents to take their children, they were disheartened and requested him to keep the children with him till they returned.

“Most of the parents were unwilling to accept this decision. They said they entrusted the children to my care and that I should take care of them. After repeated requests and convincing parents, they arranged local guardians to take their children,” he said.

“In our school there were 50 children of migrant parents staying in seasonal hostel. It took me five days to search for their relatives in villages as some parents did not have any contact numbers,” he told VillageSquare.in.

“When these poor villagers are reeling under poverty it is difficult for them to feed another mouth. It is equally difficult for the migrant parents to request their relatives to keep their children,” Sanjay Ku Mishra, an activist working on migration issues in Balangir district, told VillageSquare.in. “Government should have made alternate arrangements to deal with the situation.”

At the hostel, children between the ages of six and 14 were provided with three meals a day. But the same cannot be said now. “Without giving a thought, the administration handed over the children to their relatives who are very poor,” said Jatin Ku Patra, member secretary of Adhikar, an NGO working for migrants’ welfare in Balangir district.

“Though government has assured free ration through public distribution system (PDS) during this lockdown period, many families in remote villages are excluded from PDS for lack of Aadhaar number,” Patra told VillageSquare.in. “Government should provide financial support to these families to feed the children.”

Headmaster Khem Das said that in Nuapada district, guardians were provided with Rs 1,950 for one-and-half month ration per child. But this provision was not implemented in other districts where seasonal hostels are running.

“If there was a permanent place with all facilities specific for children of migrants in these migration-prone districts, they would not have faced such difficulties. They need not stay alone in their villages in this situation,” said Patra.

“When government is asking everyone to follow instructions to keep safe during COVID-19 pandemic then who is there to sensitize these children in the absence of their parents. If they get infected in this situation who will look after them,” said Mishra.

When contacted, Sandhyabati Pradhan, chairperson of Odisha State Commission for Protection of Child Rights (OSCPCR), said that the issue has come to her notice and she has assured of a recommendation to the state government about building a permanent facility for the children of migrant parents.

“At least this will ensure that children of migrant parents will not be left alone if any similar emergency situation occurs in future,” Sandhyabati Pradhan told VillageSquare.in.