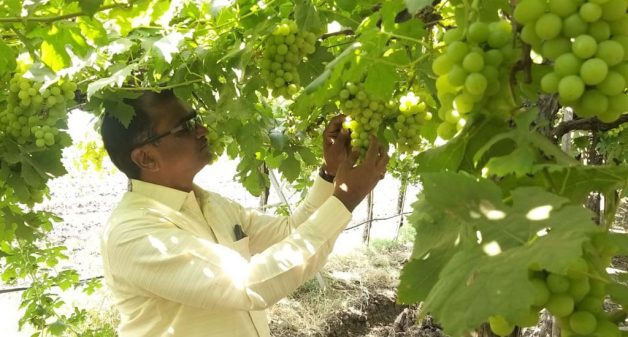 Rushiraj Shantaram Dhikhale is a young grape grower and resident of Pimpri Sayyad village in Nashik taluk. In 2016, the agriculture graduate planted saplings of a new variety of grape called Sudhakar Seedless in his 1.5-acre farm.

He believes it was the most judicious decision he has taken, for every year he harvests 120 to 160 quintals of grapes per acre — much above the yield of contemporary variety that has been grown for ages. Like most growers here, 23-year-old Dhikhale prefers to sell his produce to exporters, as it ensures an excellent return.

Around Nashik’s sprawling congregation of grape farms – big, small and tiny, with houses standing on the field’s edges — one would come across stories similar to Dhikhale’s, in the eight taluks of Nashik District. For the new variety has ushered in earnings far above that of the traditionally grown variety.

The grape farms of Nashik are located in the east of Western Ghats – a semi-arid zone with black soil. In Nashik – the place getting its name from the demon king Ravana’s sister Shoorpanakha’s severed nose (Nashika) – the average landholdings here range from two acres to 10 acres.

Nashik district has the largest number of grape farms in the country. Known as the grape capital of India, Nashik has three major grape-growing taluks, namely Niphad, Nashik and Dindori. The other taluks, namely Malegaon, Baglan, Kalwan, Ghandwad and Yeola too cultivate grapes.

The normal annual production of grapes in Nashik is 16 lakh tons during the season that lasts for six months from November. The total grape plantation in the district is close to 2 lakh acres and the average productivity of farms is around 8 tons per acre, according to Maharashtra State Grape Growers Association.

India grows nearly 20 varieties of grapes – colored, white, seeded, unseeded, with large and small berries. But it is the Thompson Seedless grape variety that occupies 55% of the area with its clones. However, the tide is turning against its popularity.

The oval-shaped mildly sweet table grape variety, Sudhakar Seedless (SS), developed by farmer-innovator Sudhakar Kshirsagar, is increasingly becoming the preferred one among the grape growers of Nashik district. With each year, acreage under SS is increasing across the grape growing taluks.

According to Kshirsagar, Sudhakar Seedless is presently being grown in over 30,000 acres and has a long list of prospective growers awaiting its grafts. However, official confirmation on the total acreage dedicated to the variety is awaited.

As its high yield and export potential become common knowledge among farmers in the state’s other grape-growing areas like Jalna, Baramati, Solapur, Pune and Ahmednagar, they too vie to replace their existing plantations. Grapes take close to two years to yield fruits after planting and many sessions of grafting.

“It was sometime in 1994 that I came across a lone plant in my farm; leaves of the vine resembled that of a bitter gourd. I cultivated it and when it fruited the berries were unlike what I have known so far,” recalled 55-year-old Sudhakar Kshirsagar, a farmer-innovator of Shivade village in Niphad taluk. “The oval shaped berry is extremely big,” Kshirsagar told VillageSquare.in.

It took Kshirsagar nearly two decades of selective breeding, to achieve popularity of the variety among the grape-growing community. It is slowly emerging as a superior alternative to the Thompson Seedless variety which has been the staple crop among the grape growers of Nashik.

Kshirsagar, a postgraduate in commerce was recently awarded an Intellectual Property Right (IPR) by Protection of Plant Varieties & Farmers’ Rights Authority (PPV&FRA ) for developing a new variety of table grape that goes by his first name.

Ever since the PPV&FR Act came into effect in 2001, only a handful of farmer-innovators has received the IPR — the investigation process taking years, at times even a decade, before the same is granted.

The Act was enacted to provide for the establishment of an effective system for the protection of plant varieties, the rights of farmers and plant breeders, and to encourage the development and cultivation of new varieties of plants.

The Netherlands, UK and Germany accounted for 90% of India’s grape exports to Europe. In 2017-18, India exported grapes worth Rs 1,900 crore to Europe. SS is presently being exported to Netherlands, UK, Germany, Russia, Dubai and Bangladesh, but not under that name.

“Learning from observing, the grape growers always follow by example and that’s why with each year the acreage in Nashik devoted to the variety is increasing,” Ramhari G Somkuwar, principal scientist, NRCG, told VillageSquare.in.

He said that the berry’s big size and its low Brix, a measure of its sugar content, are its distinguishing features and that is the reason SS has been well received in the export market.

According to APEDA, Thompson Seedless occupies 55% of the area; the rest is taken by Bangalore Blue, Anab-e-Shahi, Dilkhush, Sharad Seedless, Perlette, Gulabi and Bhokri. The oldest is Thompson Seedless, a green grape variety that has been around here close to six decades. Nashik produces nearly 80% of it.

With odds stacked against Thompson, like low demand in the export market, developing cracks in the rains and its limitations during transportation have come as a boon for prospective SS growers. The new variety is resilient to rain and drought, requires less plant growth promoters and irrigation, and is less expensive to raise.

Its yield is 40% higher than that of Thompson Seedless. In fact, the yield is equal in both varieties. But growers have an advantage , since the yield from SS taken per acre is about 10 to 12 tons only, considering the export quality.

As SS assures better returns in the export market, farmers prefer to grow the same. “While the domestic market offers us between Rs 40 and Rs 50 per kilo, the exporters offer between Rs 100 and Rs 130,” Prakash Jibhu Deore (63) of Satana village in Satana taluk told VillageSquare.in.

Deore planted SS in five acres in 2015, and two years later exported 17 tons of the fruit. He begins his harvest in the month of November when according to him “grapes are not available in any other country”, thus ensuring him inviting returns.

Kshirsagar is looking forward to the export of his variety under his name which was denied so far due to the process of granting IPR. “Since 2012, SS has been exported under the name of Thompson. From now on it will go under its own name and that gives me immense satisfaction as it’s truly an Indian variety.”