With lack of access to authentic information, myths and fears proliferate. Health workers counsel communities over phone, addressing their anxieties about the disease and the returned migrants 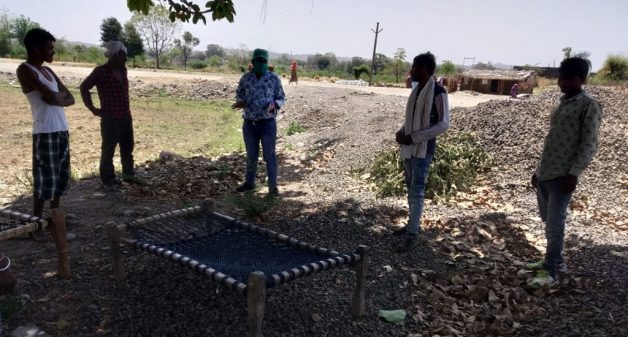 As COVID-19 grips the entire world in its talons and affects communities across geographies, ethnicities, caste and class, a wave of misinformation is spreading, sparking fear. This wave seems to have overtaken the outbreak, and poses a threat that may be more harmful than the virus itself.

Several socio-economic, cultural and psychological factors play a part in how people perceive risks during such outbreaks. The anxiety is amplified when the individual has little control over it, when it comes from an unverified source, or seem novel or exotic.

With COVID-19 there have been a lot of confusion and uncertainty, further convoluted by false information shared via social media. In addition, studies show how restrictive practices like quarantine and imposed isolation fuel fears and suspicion in the community.

These predicaments place vulnerable communities with limited access to information at a disadvantage. While several help lines counsel people and help them cope with anxieties, these are limited to the privileged population.

South Rajasthan has a predominantly rural, tribal population according to Census 2011, and is a key migration corridor of daily wage labor. Literacy in the region is 42% and that among women is 29%. With only 21% households having televisions as per Census 2011, and use of mobile phones predominantly limited to men, there is a lack of access to authentic information.

This has given rise to several misconceptions and myths about the disease and created fault lines, deepening anxieties, fears and suspicions within the community. The anxieties have further aggravated with the severe economic deprivation that these communities are plagued with, as a result of the lockdown.

BHS contacted villagers, panchayat members, patients, faith healers and community volunteers of over 60 villages. The interactions revealed the extent of myths about COVID-19 prevalent in villages.

The myths range from a village being protected from the disease since it’s near the hill of Mahadevji, to the disease spreading from a doctor’s leaked potion. Based on faith healers’ suggestions women fast to ‘mataji’, the local deity, to end the disease. Easily available food items such as egg, fish and meat are being tabooed.

In the absence of scientific conclusion on several aspects of the disease such as its cure, many myths are doing the rounds. “Bhopaas (faith healers) who expel spirits say that clanging plates will chase the disease away,” said a villager. A rumor that a mahua drink would give protection against coronavirus has created a high demand for the alcohol.

It is also feeding into existing economic and political biases. “The disease has been created by the rich to wipe out the poor,” said a villager. Villagers with political affiliations said that it is a bomb thrown at them by the ruling party. According to a villager, coronavirus is like the virus on phones and has been created by China.

Lack of familiarity with tertiary hospitals and knowledge about screening equipment also bring out suspicions. Some believe that the infrared thermometer is a machine used to kill infected migrants. Villagers are reluctant to seek medical care for any health issue, for fear of being diagnosed as a COVID –19 patient and being quarantined.

Migrants who have returned through the ordeal of lockdown face double marginalization and animosity in the villages. They are discriminated as having brought the disease to the village. Check-posts prevent anyone from entering villages.

Discrimination stemming from lack of information about the disease and its transmission has posed a threat on the community’s solidarity. The ‘other’ing of migrants and their families and targeted boycott against them is tearing apart the spirit of collective and trust within community members.

“A migrant who returned to our village brought the disease. When doctors and ASHA worker went to his house to take him to the hospital, he escaped and is missing now,” said a villager. It is needless to say that if a positive case arises, there is a possibility of long-term stigmatization.

The lockdown has presented disproportionate level of adversities in these communities. So much so there is an increasing sense of frustration. “When will the disease get over? We need to go back to work,” said a villager who works at a MNREGA site.

Some underscored the threat of the disease, compared to the effects of the lockdown. “People in the village will die of hunger and not this cold and cough,” said a panchayat member.

COVID-19 like any novel disease has sent governments on a chase to ascertain its origins, infectiousness and cure. What this approach needs to include is also appropriate communication that reaches the last mile.

Instilling trust and social cohesion to build collective resilience is critical in these times. While mass media is useful for large-scale information dissemination, it has its own limitations as a one-way communication tool.

Our experience from the tribal areas of South Rajasthan has reaffirmed the need for interpersonal communication to engage with the community over and above strengthening healthcare services.

In addition to putting an end to the myths doing the rounds, BHS’s core team comprising of physicians and program executives knew the general doubts that the villagers had. These included what COVID-19 is, how it spreads, who may be at higher risk, the preventive measures, etc.

They also learnt about the queries that the villagers asked BHS’s field team. The villagers sought clarifications for doubts such as – would all migrants be infected, does infection lead to immediate death, and the like. The BHS team prepared an FAQ and equipped their team to respond to all the queries of the villagers.

In addition, BHS team sensitized the field teams of partner organizations Aajeevika Bureau and Rajasthan Shram Sarathi Association, since they were in touch with community members. The counselors called the local contacts of these organizations too.

The average 20-minute telephonic counseling involves listening to the villagers’ current perceptions and anxieties, systematically counseling them on COVID-19, reiterating the preventive measures, addressing their queries and reassuring them.

The caller also asks about the well-being of the family and if there are families in the neighborhood in need of immediate support in terms of health or relief. Information about such families in need is communicated to the teams concerned.

Five executives of the core team and 12 health workers have been tele-counselling people for the past three weeks. The caller shares his / her number, so that, if necessary, the person could call to get concerns addressed. The callers documented insights from the calls and discussed, so as to shape the counseling further.

It is too early to conclude on the outcome of the telephonic counseling. However, it holds value in the context of lockdown since conventional awareness campaign is not possible. Sensitizing key community members such as panchayat members, community volunteers and faith healers is crucial to instill trust and reassurance.

As the telephonic calls brought several myths and anxieties to the fore, the team shared the need to reach out to more community members. Therefore, apart from the calls, health workers counseled patients visiting the clinics, and counseled family members during home visits.

Some of the community members such as members of women’s collectives and volunteers in the villages have initiated counseling of families in their neighborhood, providing comfort, assurance and support and identifying at-risk members for an early response.

Having close touch with the community, listening and assuaging their fears and anxieties have enabled some families to seek healthcare and relief support.