After lockdown distress, villagers are unwilling to migrate again

Having suffered during the lockdown, villagers do not wish to migrate again to cities for work. This would impact the rural as well as urban economy 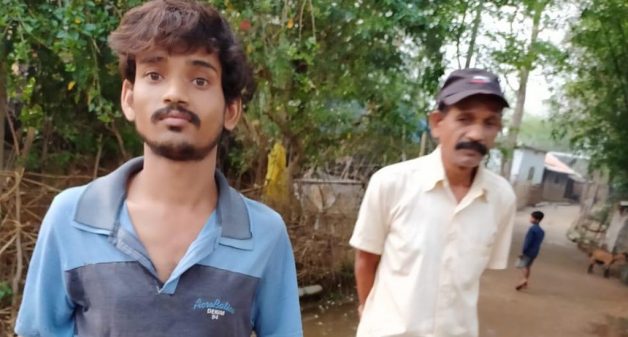 Migrant workers such as Sambaru Ho, seen with his father in Haridakut village, Odisha, do not wish to return to cities for work, even after the lockdown is lifted (Photo by Srinibas Das)

Sambaru Ho, who has been working as a construction worker in Delhi for three years, survived with one meal a day for a week, when his employer halted work anticipating a lockdown. After spending all his hard-earned money, he returned to Haridakuth village, his hometown in Mayurbhanj district, Odisha.

Haridakuth is a tribal village, where agriculture used to be the primary source of livelihood. But with lack of irrigation facilities, year-round agriculture has not been feasible for the villagers. As a result, majority of the youth like Sambaru Ho prefer to migrate to cities.

Ho migrated to earn money and get his three sisters married. Though he is happy to be home and spend time with his two small children, he is worried about his finances. Knowing his hardships, his father does not want Ho to return to Delhi. “Money is not everything; we will see how to sustain in the village itself,” said his father.

“I won’t come to Bengaluru again,” said Prasanta Sahu (36), a migrant worker from Kalahandi district of Odisha, stranded in the city with Rs 900 rupees left in his pocket, which he is afraid will not be enough to last till the end of lockdown.

“I’m thousands of miles away from my village. Only God must save us from this evil virus,” Sahu told VillageSquare.in. “You see Bengaluru city. Beautiful with tall buildings and clean roads. But for us, life is a daily struggle. If you die, no one cares.”

Mohan Kumar (34) from Palamu district of Jharkhand, came to Bengaluru, so that his father could repay the loan he had taken last year to buy a pair of bullocks. Mohan Kumar was working as a carpenter in a furniture factory which laid off its workers without paying their wages for the month of February.

“Government staff and private company employees can work from home and get paid,” Mohan Kumar told VillageSquare.in. “But that is not possible for us. We earn wages every day. If there is no work, there is no money and food.”

The stories of Sambaru Ho, Prasanta Sahu and Mohan Kumar reflect the plight and anxiety of hundreds of thousands of migrant workers in the country. Many are desperate to leave the cities which used to provide their bread and butter until recently.

“In India, labor migration is not a policy priority,” Benoy Peter, executive director of Centre for Migration and Inclusive Development (CMID), a Kerala-based non-profit advocating and promoting social inclusion of migrants in India, told VillageSquare.in.

A majority of the migrant workers in India belongs to socially and economically disadvantaged communities. They hail from poor small-scale farming households. They are part of the informal economy that makes up 80% of India’s workforce and fuel India’s urban centers.

“Most of the migrant workers are not part of any trade union or collective; there is inadequate data on them,” said Peter. “They are hardly considered a part of the local political economy.”

CMID in collaboration with Gram Vikas, a rural development organization working in Odisha and Jharkhand, conducted a rapid assessment study in February 2020, to understand the initial impact of the lockdown on Kalahandi’s migrants, whose remittances play a critical role in the local economy.

A representative random sample of 95 migrants from 440 households across 22 villages of Thuamul Rampur Community Development Block was selected.

Kalahandi, Bolangir and Koraput districts, known as the KBK districts, are among the most backward in the country. They contribute significantly to labor migration from Odisha. Thuamul Rampur has the largest percentage of Scheduled Tribes with the lowest level of literacy in Kalahandi district.

The rapid assessment revealed that over one-third of the workers were at their destination sites. In the absence of income from work they were worried about their dwindling cash and food stock. And most of them were ignorant about COVID-19 symptoms, and the prescribed preventive measures.

The study recommends early diagnosis, quarantine facilities and treatment of the returned migrants. Those in destination and transit points should be assured of shelter and food, in addition to payment of pending wages. They should also be equipped with critical information and resources on COVID-19.

Several social activists and civil society leaders are on a mission to provide critical assistance to distressed migrants stranded in destination sites as well as the returnees.

Around 40 construction workers from Jharkhand district were stranded in Dhenkanal, Odisha. Their contractor had fled to Gujarat without providing wages for two months. “We took the case to the labor department and got them their pending wages and food,” said Mahendra Parida, a member of ODMMI.

“The impact of the lockdown will be catastrophic in the long-run,” Srinibas Das, who has extensively worked with migrant workers in the KBK region and is currently working as a program officer at government’s Odisha Livelihood Mission, told VillageSquare.in.

“Those who are back in their villages don’t want to resume work in cities, even if the situation improves. Stranded workers wish to settle in the village after returning,” said Das. “Village provides social security and safety nets. At difficult times, it is the family and relatives who take care of these migrant workers.”

It is estimated that the rate of migration from rural to urban areas will be substantially reduced in the coming days. Without migrant workers, the economy of the cities will crumble, foresee researchers. Peter said that this is the time for India to show that it cares about its migrant workers.

“The government should take urgent action in ensuring food and decent living conditions of the migrant workers. It is critical to expedite the process of testing for COVID-19, and sensitize the workers about the virus in their language,” said Peter.

“If India does not rise up, to the challenge and take care of the poor migrant workers, according to the International Labor Organization, over four million people can slip into extreme poverty,” Dinesh Suna, Coordinator at Ecumenical Water Network, World Council of Churches, based in Geneva, told VillageSquare.in.

Abhijit Mohanty is a Delhi-based development professional. He has worked extensively with the indigenous communities in India and Cameroon. Views are personal.