Use of machaan for mixed cropping boosts farmers’ income 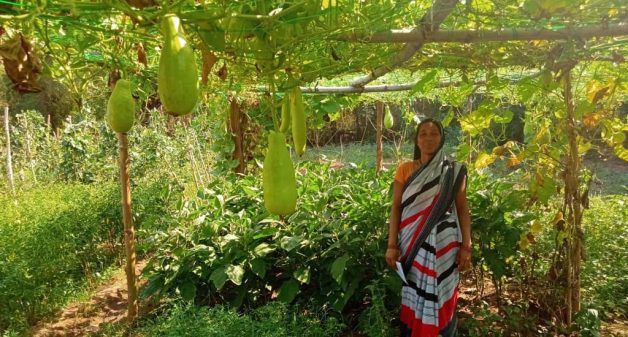 Smallholder farmers suffer from paucity of resources and are often vulnerable, even though they constitute 80% of farmers in India. To boost farm income, farmers in Pratappur administrative block of Surajpur District in Chattisgarh have started setting up machaan (trellis), to grow multiple crops.

Ropan Paikra, a smallholder farmer of Chandora village, who has been traditionally cultivating vegetables for years, is building a machaan. Like Ropan Paikra, a few other farmers across Pratappur are constructing trellises.

Talking to VillageSquare.in, Paikra said, “I am constructing the machaanin 30 decimals (13,068 sq feet) of land. It will ensure that I grow four or five different types of vegetables one after another. Earlier, I used to grow mainly potatoes and brinjals.”

Woman farmer Sonamati Paikra from Mayapur 1 village in Mayapur panchayat of Surajpur said that six people in her village have started this trend. As trellis system helps farmers grow creepers and ground vegetables simultaneously even in small plots, they have adopted the system to boost their income.

Sonamati Paikra has built her trellis in 12 decimals (5,227 sq feet) of land, to grow tomatoes and five other types of crops. She said that her father Sukhlal Paikra used to grow ridge gourds in the machaan during monsoon.

Trellis structures are made with easily available creepers, local wood and bamboo. Generally five feet long bamboo poles are used, though farmers can create a machaan with wires also. The trellis measurement varies depending on plot size, but is roughly 15 feet x 15 feet.

Ramesh Kumar Singh, cluster coordinator at SSGVSS, has built a trellis in his backyard, for demonstration purpose. Though reluctant initially, farmers started building trellises after observing the benefits and profits.

The trellis method is being implemented in 12 villages in Pratappur administrative block. There is a plan to expand it gradually. Farmers need to invest about Rs 1 lakh for building a trellis in one acre of land. This includes cost of galvanized iron wires, labor charges and drip irrigation, if needed.

The trellis system helps space to be utilized properly, with plants such as ginger and turmeric covering the ground, and creepers being grown on top of the trellis. In the middle wherever there is space, tomatoes and brinjals can be cultivated.

The trellis ensures that climbers like gourds do not touch the ground and remain healthy during fruition. It prevents fungal and bacterial diseases and hence fetch higher price.

“It is an ideal system to grow crops like turmeric,which loves shade, and creepers on the top,” Sujit Kumar Das of Professional Assistance for Development Action (PRADAN) told VillageSquare.in.

“The creepers growing on the top prevent harsh sunrays and hot winds from drying up crops like ginger and turmeric on the ground,” said Sonamati Paikra. “We save a lot of water as narrow irrigation channels running across the ground help retain moisture.”

Akash Kumar, agriculture cluster coordinator at SSGVSS, said that farmers grow creepers like bitter gourd on top, and fenugreek, red spinach and amaranth on the ground. When the first set of crops is harvested, the second one is cultivated. The trellis makes it easy to grow crops having different harvest timings.

“We promote mixed cropping, so that if farmers lose one crop, they can fall back on others. Earlier farmers used to suffer losses cultivating a single crop,” said Ramesh Kumar Singh. “So, the risk was very high. Now, they are assured of certain gains.”

“In the machaan system, all crops get adequate water and optimal sunshine. It is an ideal way to produce more food in a limited space. It also uses less water and we can save a lot of water in the summer months,” Akash Kumar told VillageSquare.in.

Dabris (farm ponds), are also dug to conserve water. Rainwater gets collected in the ponds, helping farmers irrigate crops. Sujit Kumar Das said that in many places farmers grow fish in these farm ponds, as vegetables do not need flood irrigation.

Das said that machaan farming is part of a watershed project, which is a collaboration between the Chhattisgarh MGNREGA cell, PRADAN, Axis Bank Foundation and Bharat Rural Livelihood Foundation. Started in October 2018, it covers 12 districts and will continue till September 2022.

The project aims to improve the resilience of one lakh smallholders. “The project aims to promote livelihood and sustainability among farmers having less than 5 acres, by addressing the issue of mono cropping, promote double cropping and carry out soil and water conservation,” said Das.

Bhupendra Singh, who heads SSGVSS, said that it has always been a tradition in Chhattisgarh to grow creepers in trellises, but the farmers did not practice it systematically. “Farmers used to buy tools, wires and threads to make the trellis. We told them to use locally available resources,” said Singh.

“We have ensured that the structures would be durable and cheap. We are preparing some models that should be ready by July,” Bhupendra Singh told VillageSquare.in. “We want the structures to last for five years at least.”

Saurabh Devarata, coordinator at SSGVSS, pointed out that machaan farming is suitable for smallholders, who have very less land and are extremely poor. It is a nature-based system, which saves water and farmers’ precious time.

“The trellis system has picked up, making farmers self-sufficient,” Devarata told VillageSquare.in. “It is ideal for farmers with small plots as many crops like creepers and ground vegetables can be grown at the same time.”