Volunteers in Odisha ensure stranded migrants do not go hungry

Social service personnel working on migration issues network with philanthropists, administrators and volunteers to ensure stranded Odia migrants and other state migrants in Odisha are fed 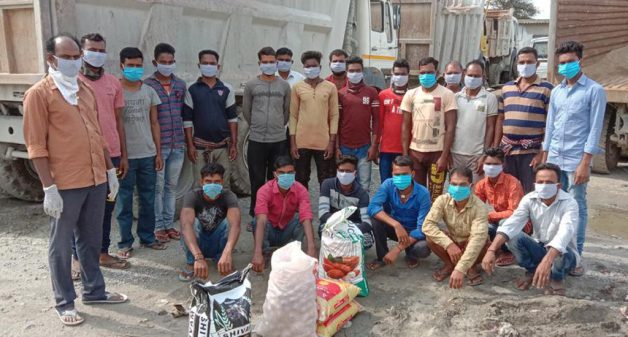 “Help us, please. Our employer has closed the factory and asked us to leave. We are on the street. I have some money to feed my family. Once that’s over, I don’t know what will happen,” said the person on the other end, when social activist Sandeep Patnaik received a distress call on his mobile on 22 March.

Patnaik received a similar call from a migrant worker stranded outside Odisha, within a few minutes of the first one. The second person who called said that his employer had asked them to leave the makeshift shanties where they were staying. “We don’t have a place to live and food to eat,” said the caller.

Soon Patnaik was flooded with calls and videos from Odia migrant workers from across the country. The videos depicted the miserable condition of the stranded migrant workers who were eager to return to their villages in Odisha.

Patnaik contacted a few others who work on migration issues and found that all of them had received distress calls from Odia migrants. Understanding the gravity of the situation, the social workers decided to intervene and resolve the issues of migrant workers stranded outside Odisha due to the lockdown.

The sudden decision of nation-wide lockdown was declared to prevent transmission of COVID-19 and ensure physical distancing. But it doubled the miseries of migrant workers who were engaged in the informal sector to make both ends meet.

The avenues that give the rural poor an opportunity to work as construction workers, cooks and domestic helps to earn were closed, forcing them to live in hunger. Many wanted to return because they had no food and no money to pay rent. As transportation services were withdrawn, many started walking to their villages, some walking more than hundreds of miles with their children and belongings.

“As we had been advised to stay at home, we used technology to reach out to the migrants. Those of us working on migrants’ issues formed a group called Odisha Distress Mapping and Mitigation Initiative (ODMMI) on a mobile messaging platform,” said Sandeep Patnaik, one of the core members of this group.

“We realized that we had to map the locations of distressed migrants and intervene so that the government could reach these migrants outside the state. We felt that no one should go hungry,” Patnaik told VillageSquare.in. Every day the volunteers of the group receive nearly 1,000 messages from stranded migrants.

After receiving information about stranded Odia migrants from anywhere in the country, members of the ODMMI team verify it and then share the same with the government department concerned. None of the team members met in person. Everyone worked from home, and technological tools helped them coordinate.

Every year lakhs of people migrate from Odisha to different parts of the country in search of livelihood. ODMMI team tried to reach all those stranded in other states without food and shelter. Also, they provided cooked food to migrants from other states stranded in Odisha.

With the help of the mobile messaging platform, the team locates stranded migrants and ensures that they do not go hungry, while emphasizing the need to follow precautionary measures to prevent them from contracting the coronavirus infection.

“Apart from government intervention, some individuals and charitable organizations in destination places extended their support to provide ration to the needy,” said Patnaik. “The group which started with a handful of members has now reached more than 200, with civil society, trade union leaders, individuals, social workers, NGOs, political parties and journalists joining hands.”

It was equally difficult for migrants who reached their villages after walking miles. As the disease was first diagnosed in urban areas, the migrants were not welcome in their own villages. In Odisha, schools and panchayat buildings have been converted into isolation centers where migrants are asked to stay for the 14-day quarantine period.

If they develop any symptoms, they are shifted to specific hospitals. “As this is the most critical time, we encourage all returnee migrants to register and stay in quarantine for 14 days. Once they follow this then the villagers welcome them happily,” said Rajib Sagaria, a journalist and social worker in Balangir district, over phone.

Now villagers have become more aware about physical distancing, hand washing and keeping returnee migrants in quarantine. From western districts of Odisha, a number of people migrate to work in brick kilns and construction sites. “We are convincing them to stay wherever they are and to resume work once the lockdown is lifted,” Sagaria told VillageSquare.in.

Though government announced that it was providing rice through public distribution system (PDS) to the poor and cooked food to nearly 70,000 migrants of other states stranded in Odisha through community kitchens, the reality was quite different.

Till government could streamline food or dry ration distribution, some like Sivaram, state president of Trade Union Center of India, decided to feed stranded migrants of other states and the poor. From 20 community kitchens across Bhubaneswar, Sivaram and his team of youth volunteers feed people. Each community kitchen gives a meal to about 300 people every day.

“There is a need for universal PDS system in providing food distribution to the poor. Those who are poor and needy should be given food without verifying their ID proof,” said Deba Ranjan, an activist and a member of Jan Adhikar Manch.

“If the government does not take measures, the day is not far when poor migrants will die of hunger and starvation,” said Deba Ranjan, told VillageSquare.in. “We have submitted an open letter to the chief minister to update him about the situation.”

The Odisha government has already started bringing back stranded Odia migrants from different states to Odisha. The returnee migrants need to register at the gram panchayat and then quarantine themselves for 14 days. The state government will provide Rs 2,000 to each individual at the end of the quarantine period.