Repressive norms pushed adolescent girls to poor health and early marriage. Bringing them together into groups has helped them improve their health, stop child marriage and learn vocational skills 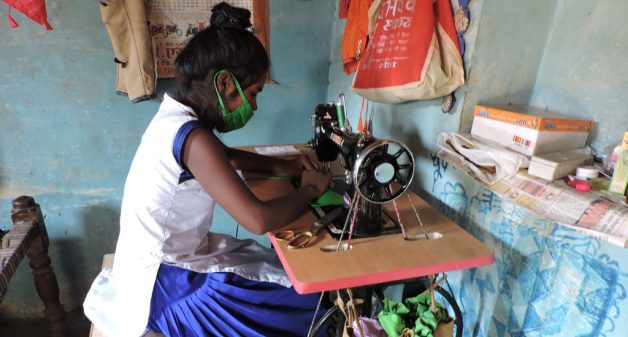 Adolescent girls, when brought together into groups, could discuss about issues and also to learn skills towards financial independence (Photo courtesy Vikas Samvad Samiti)

In Rewa district of Madhya Pradesh, adolescent girls are making masks, for distribution of the same among villagers, in the wake of COVID-19. A small group of girls, work together, maintaining the mandatory one meter distance and make 150 to 350 masks per day.

The girls learnt to make masks before the lockdown. The cotton masks that they made have been distributed among villagers. The villagers are using the masks. The girls who make the masks are members of groups that help discuss issues pertaining to them and learn vocational skills toward s financial independence.

The school dropout rate is quite high among the adolescent girls in Rewa. These girls often lag behind in education and mostly study up to class 5. Most of the girls belong to the poorest sections of the society and are forced to quit their education midway.

As per prevalent social customs, most girls are married before they turn 18. Normally, marriages take place when the girls are between 12 and 15 years of age, before they attain full physical and mental maturity. Due to ignorance and insufficient guidance at home, the girls are unable to take care of their health. Most of them suffer from anemia.

To help the girls overcome such problems and to spread awareness on various aspects relevant to them, Vikas Samvad Samiti (VSS), a grassroots organization working in the region, facilitated the formation of adolescent girls’ groups in each village.

“The girls are generally aged between 10 and 12,” Pushpendra Singh, coordinator at VSS, told VillageSquare.in. “Through discussions we explain about the right age for marriage, menstrual hygiene, the importance of education and the like.”

The program did not have a smooth start. By the end of 2015, VSS made requests across the villages that the formation of such groups will help in talking about important issues. Gradually, committees were formed and members were selected. Discussions on various topics happen among the girls over an hour or two.

During discussions the girls learn about management of weight and hemoglobin levels. ASHA and anganwadi workers, and auxiliary nurse midwives are present during the discussions so that the girls can talk freely and get their doubts cleared.

Initially the girls did not know the importance of maintaining hygiene and the consumption of protein-rich food. “We told them the importance of protein and iron in diet,” said Sia Dulari of VSS. The awareness helped the girls consume appropriate foods, and their health started showing improvement.

VSS is also helping them get started with kitchen gardens for nutrition benefits. The girls learnt the importance of vegetables in their meals. “I eat a lot of bhindi, palak and pulses these days. I am in class 9 and want to study further,” Chanda Adivasi of Khaira village,told VillageSquare.in.

When villagers observed the benefits the girls were gaining by being members of the group, VSS initiated the girls to gradually talk about reproductive health, empowerment, child marriage, stress management and employment opportunities like stitching and beautician courses.

Nirmala Adivasi (17), a member of Dastak Kishori Samuh, is a resident of Dhurkuchh village in Rewa. After becoming a member, she learnt about malnutrition, health, sanitation and self-care during menstruation.

“We learnt how to minimize pain during periods. We learnt that we need not feel afraid or shy,” Adivasi told VillageSquare.in. “ We were told to use pads instead of cloth. Washing cloth is problematic and there is no suitable place to dry them in the sun.”

The girls told Sia Dulari that no one had talked to them about menstruation before. “We discussed how to use and change cotton cloth pads and the benefits of washing them in hot water and drying in the sun for those who could not afford sanitary napkins. We asked the girls’ female family members to join the discussions,” she said.

After girls discontinue studies due to social and economic reasons, they are married at an early age. According to Rewa-based social activist Ram Naresh, whose organization Rewanchal Dalit Adivasi Sewa Sanathan partners with VSS, prevention of child marriages has been the most important intervention.

“We used to work on malnutrition and the health rights of women and teenage girls. So, we helped VSS to form separate groups of women, children, youth and adolescent girls,”Naresh told VillageSquare.in. “The girls informed us about child marriages. We were able to stop such marriages by counseling parents.”

“Now these adolescent girls have become so confident that they talk at social gatherings. They call us to enquire about food habits and visit other villages to spread the message,” said Naresh. To further empower them, the girls were taught vocational skills.

Some girls have learnt beautician courses. Some of the girls were trained in tailoring, which helped them stitch masks and distribute among villagers, during the lockdown. Renu Sahu, a member of the girls’ group and who has received training in tailoring, wants to train as a nurse in future.

Apart from girls’ groups, youth groups, children’s groups and women’s groups have been formed in all the 26 villages of Rewa. “We formed separate groups for different kinds of activities and discussions,” said Singh. In children’s groups, the children discuss their rights to clean water and toilets in schools, etc. Members in children’s groups range from classes 6 to 10.

Similarly, youth groups have members aged between 19and 26 and comprise both men and women. But sometimes women in youth groups still find it difficult to discuss issues with men. However, Singh said that their hesitance will gradually ease away and better awareness would bring about a positive change.