Already in distress due to lockdown, horticulture farmers of Sundarbans suffer saltwater intrusion and loss of trees to Cyclone Amphan, while tiger widows lose livelihoods and homes 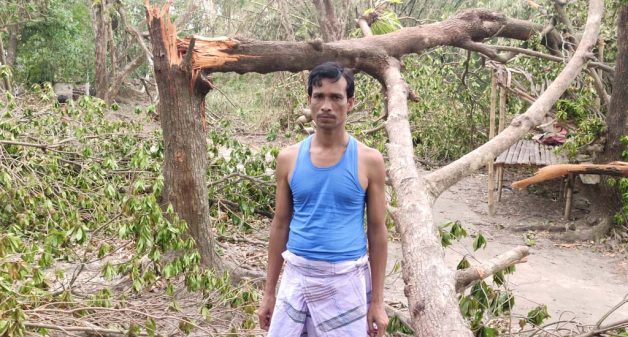 Abu Kalam Molla standing in his cyclone-hit farm of sapota trees, his only source of income (Photo by Gurvinder Singh)

Abu Kalam Molla was eagerly waiting for the end of Ramadan, the ninth month of the Muslim calendar when the fasting ends, to celebrate Eid al-fitr with his family.

The 45-year-old who resides at Sahajadapur village in Sundarbans off West Bengal had purchased new clothes for his three children. But on the day of the festival, Molla and his children wore old clothes. He appeared grim, because five days prior to the festival, Cyclone Amphan had hit his village.

Cyclone Amphan that hit West Bengal, has affected Sundarbans the most, leaving countless horticulture farmers and tiger widows in deep financial trouble, who were already in the brink due to the nationwide lockdown.

Abu Kalam Molla, a fruit farmer by profession, lost 52 fruit bearing sapota – also called chikku , safeda and sapodilla plum – trees to Cyclone Amphan that struck his village on 20 May. “The losses have been so severe that it is impossible to explain in words. The trees were my sole source of livelihood. But everything is now gone,” he said.

“The sapota trees are not like other crops that can be grown next year. It would take at least 20 years for me to recover the losses I have suffered because of Cyclone Amphan,” Molla told VillageSquare.in. “How can we celebrate Eid under these circumstances?”

The situation of Majibur Gayen, a fruit farmer of the same village is no different. The 55-year-old had around 30 trees laden with sapota fruits but only broken branches remain in his orchard. The fruits fell when the cyclone hit.

“The devastation has been huge. The cyclone has broken me,” said Gayen. “New plants will take 12 to15 years to bear fruits. The lockdown had already shut our business for over two months and the cyclone has destroyed our livelihood forever.”

Sahajadapur village has over 200 farmers who grow sapodilla plums. The fruits are sent to others states and also exported to other countries. The area comprising Joynagar-I and II administrative blocks of Sundarbans is the hub of sapota production in West Bengal.

The region accounts for nearly 80% of the state’s sapota production. West Bengal is known across the country for its luscious sapodilla plums. Over half a million people are directly involved in the sapota fruit trade in the state.

According to Agricultural and Processed Food Products Export Development Authority (APEDA), West Bengal has 4.16% share in sapota production of the country. The state produced 48,200 tons of the fruit in 2017-18.

Farmers in a fix

Farmers are being pressurized by the lease holders to return their money. “Most of the farmers here give their orchards on lease for a minimum period of three years. The payment is decided depending upon the number of trees,” said Aftaruddin Gayen (40), a fruit farmer of Sahajadapur.

The lease holders then sub-lease the farms or sell the fruits to middle men. “The lease holders had already made advance payment to farmers but now they are asking them to return the money or extend the agreement to two decades. We are helpless,” Aftaruddin Gayen told VillageSquare.in.

Anwara Sheikh (45), who lives in Serangarpur village shuddered as she recalled the devastation of the cyclone. “The administration had already issued warning, asking us to shift to safer areas, two days before the cyclone was going to make landfall,” she said.

“But we didn’t take the warning seriously as severe storms are common in Sundarbans,” Anwara Sheikh told VillageSquare.in. “On the morning of 20May, the sky turned pitch black and the howling of winds intensified. We had clearly underestimated Amphan and it cost us dearly.”

Soon Sheikh’s tin shed was blown apart. A tree in her house got uprooted and fell on her roof. Mud houses began to collapse one after another. “We were lucky to survive. I had seen nothing like that in my entire life,” said Sheikh.

The state administrative officials said that they were assessing the loss to property and livelihood. “We have sent a detailed report to the state government about the loss of sapota trees, and asked for planting material to those affected by the cyclone,” said a senior horticulture officer of South 24 Parganas district.

The cyclone was the worst and most ferocious storm to hit Sundarbans in the past three centuries. According to the state government 86 people lost their lives across the state and millions of people have become homeless.

The worst affected areas are Sagar, Namkhana, Kultali and Patharpratima administrative blocks of Sundarbans. Even a week after the cyclone, scenes of devastation are visible in every nook and corner of Sundarbans.

Most parts of the North and South 24 Parganas districts that cover Sundarbans are without power, and people are hiring generators at exorbitant prices to beat the heat and to pump water. Electric lamp posts, and wires are strewn across the roads raising danger of accidents.

Apart from the farmers, the worst affected are the widows, referred as tiger widows of Sundarbans because of losing their husband to man – animal conflicts, who are facing the double whammy of lockdown and cyclone.

Nearly 3,000 widows reside at Bali Island off Gosaba administrative block, one of the severely cyclone-affected areas. Most of the widows work in small-scale units for their livelihood but the lockdown has led to suspension of work. Many have lost the roof over their head to Cyclone Amphan.

“We are already starving for the past two months due to lockdown. The cyclone has reduced my house to a heap of mud. The bamboo skeleton is the only sign that my house stood there. It would have been better had the cyclone killed us,” Saheda Gaji (42), a tiger widow and resident of Bijaynagar village in Bali Island, told VillageSquare.in.

Saheda Gaji resides in one of the dangerous area in Sundarbans as her house is on the other side of the forest separated by a river. The villagers have to live in constant fear of being attacked by tigers and crocodiles that come into the human inhabitation.

The cyclone has damaged almost the entire nylon fencing that had been erected to prevent tigers from entering human habitation in the Sundarbans, triggering fears among forest officials of a recurrence of man – animal conflict in Bengal’s largest tiger reserve.

To add to their woes, embankments have breached at several places resulting in saline water entering the agricultural fields. “We grow vegetables and sell at local market. But the saline water has destroyed the standing crops. How will I feed my family?” said Paromita Mandal (55), a resident of Bijaynagar village.

According to reports, around 70 embankments have breached in various areas of Sundarbans, destroying over a thousand houses. “Most of the houses are on the bank of River Bidyadhari and were washed away in the cyclone,” said Prasenjit Mandal, founder of Sundarban Foundation, a non-profit organization.

“The administration has so far given tarpaulin sheets to locals. We have been distributing free ration kits to them,” Prasenjit Mandal told VillageSquare.in. Forest officials said that they were repairing the nylon nets to prevent human and animal conflict.

“The need of the hour is to plant mangrove trees to minimize the impact of natural disasters. Around 1,600 hectares of mangrove trees have been destroyed in my jurisdiction alone,” said Santhosha G.R., the Divisional Forest Officer (DFO) of South 24 Parganas.