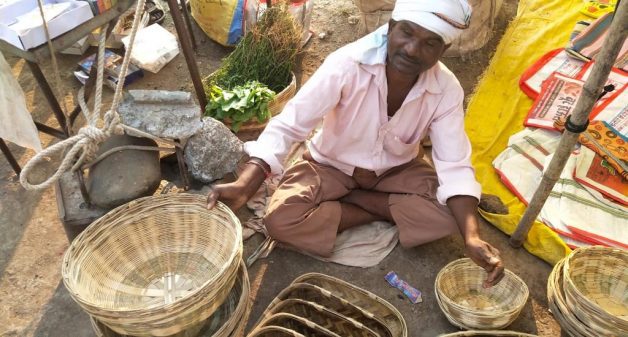 Tilakram Basod was at the Harisal weekly market in Melghat, to sell his bamboo products. Melghat has been in the news for the last few years for many reasons, especially the malnutrition status and deaths of infants due to malnutrition. However, Melghat plays host to livelihoods of countless traditional artisans in the region.

There are hundreds of invisible yet vibrant livelihoods that sustain many households, of which the country needs to be aware of. These livelihoods are vibrant as of now but there is every chance that these will cease to exist if the government does not make urgent interventions.

Harisal is situated in the Melghat forest region of Amravati District in Maharashtra. It is one of the entry points to the Melghat Tiger Reserve forest. Tilakram Basod belongs to the Basor community. There are nearly 300 households spread across two administrative blocks of Chikhaldara and Dharni of Melghat region.

In the 40 villages of these two blocks, the Basor households range between one and 20. The Basor community has the traditional skill for making different bamboo products like baskets, winnowing fans for cleaning of food grains (called as soop in the local dialect), mats and fences for houses.

The Basors make these articles at home. The designs have been passed on to the next generation without much changes. From a young child to an old person, every member of the Basor family helps in making the products. Whenever one is free, they engage themselves in making these products.

Tilakram Basod imbibed the skills of making bamboo products from elders. Just like Basod, nearly all the Basor households in Melghat region are involved in making different types of bamboo products. This is their primary livelihood, as most of the families – except a few small and marginal landholders – do not have any agricultural land.

The weekly village markets, also called as haats, serve as an assured outlet for Basor artisans. Typically, the artisans carry the products to the markets in the vicinity, sell the products throughout the day and return home in the evening.

The artisans move in rotation among the markets over the weeks. Each time they go to a different market nearby, as each has a dedicated day and cater to a different set of neighboring villages.

During festivals of Diwali and Holi, and also during the marriage season, business is good and artisans make additional income, as the traditional bamboo products are given as gifts on these special occasions.

Traders from nearby towns and cities such as Paratwada, Amaravati, Burhanpur and Khandwa visit the haatsand purchase the bamboo products in bulk. Thus, the markets, though localized, ensure regular cash flow for the Basor artisan families, for almost 10 months of the year, except a few months of monsoon.

The making of bamboo products require freshly harvested green bamboo of a particular species (Dendrocalamus strictus) called manvel locally. It is more flexible and easier to work with. Availability of raw material is critical with regard to the four parameters of quality, quantity, price and timeliness.

The community never stocks the bamboo. Whenever they require the raw material, they bring the bamboo in a quantity of three to five pieces at a time, carrying the bamboo poles as headload. A family requires 20 to 25 bamboo poles per week, as the work is done manually and the process is slow. They do not use any advanced tools or machinery in making these products.

The community now struggles to get the raw material, since the Melghat forest has been declared as a tiger reserve. “It is the only source of earning for me,” said Tilakram Basod. “Without any landholding and any other skill, it’s difficult for me to feed my family.”

Just like Basod, many Basor families, for whom making bamboo products is the sole livelihood, face the same obstacle as it is becoming increasingly difficult to get the raw material.

Bamboo is included as minor forest produce (MFP) under Forest Rights Act enacted in 2007, but the twist is, the right to harvest MFP is given only to the Scheduled Tribes (ST) community. The entitled rights allowed gram sabhas to sell the bamboo to big paper mills and industries.

Basor community of Melghat region falls under Schedules Caste (SC) category. Even though they live in the same village, they cannot harvest the small quantity of bamboo they require for their livelihoods. Forest in the vicinity of the villages has depleted, forcing the artisans to walk long distances, from 5 to 10 km on foot, to get the essential raw material. It’s mostly women who have to undertake this arduous task.

The forest department has a restriction on entering the core reserve forest area, leave aside cutting of bamboo in Melghat Tiger Reserve. The community can bring bamboo from the buffer area of forest. But many of the community members said that when they are seen bringing the bamboo, they are booked under false cases of poaching and illegal timber cutting.

In earlier years the forest department had made a provision of giving 1,500 bamboo poles annually to each household of Basor family called nistar (for use). Against an identity card called Burud card issued by the forest department, each artisan was entitled to collect the necessary raw material from the forest depot near his / her village.

It was similar to the artisan cards issued to weavers or a ration card to get supplies from the public distribution system (PDS). During our visit to the region, we learnt that the last time such distribution of bamboos against the Burud card took place was in 2013.

In our visit to the area, we met representatives of the community, the forest department, the NGOs active in the region and some private contractors aware of the situation. It seems that everyone is looking at the problem from the narrow perspective of what is not possible for themselves. Hence they shift the blame and responsibility to the other stakeholders.

The forest department seems to cite the enactment of The Provisions of the Panchayats (Extension to the Scheduled Areas) Act, 1996 (PESA) and FRA, and thus showing its inability to intervene in this issue. They want the gram panchayat to take lead. The NGOs want the government to respond.

As it is, the community is small in number and lacks voice. They feel helpless and so the only alternative is to somehow manage to get the raw material from the available resource, often bordering on trespassing and / or illegal means.

Unless there is a coordinated approach to seek solutions, the blame game of pointing fingers at other stakeholders will continue. Considering the small number of families in this craft, it will not be difficult to sustain making bamboo products without depletion of resources.

Otherwise, the day is not far when we would read about the loss of one more traditional livelihood that the Basor Community is keeping alive. “We manage by arranging for bamboo poles from here and there, but it is not sustainable,” said Tilakram Basod. “If things continue like this, our children will have no option but to work as daily wage labor in a nearby town.”

In Chikhaldara and Dharni administrative blocks alone, there are about 300 households. Do we want the members of all these Basor families working in brick kilns, infrastructure project sites, roadside hotels on highways and in construction work in the coming years?