With agriculture turning unsustainable, villagers migrated to nearby towns for work. Community planning leading to sanctioned MGNREGS works has ensured local livelihood and has stemmed migration 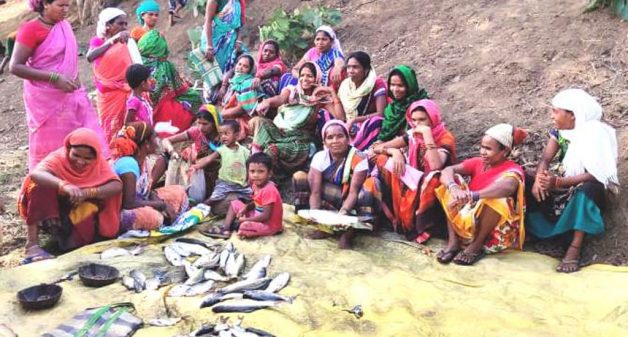 Farm ponds, like the one in Dodrapahad village, created under MGNREGS, has stemmed migration and helped villagers grow fish for nutrition and income (Photo by Pankaj Saroj)

“Every day we hear about the struggles of migrants from different parts of the country during the lockdown and it’s very disheartening,” said Lata Korram of Dodrapahad village in Masulpani Panchayt. “My family and I are relieved that today we don’t have to migrate since we have work available in our village. Now no one migrates for work.”

With about 300 families, Masulpani is a small panchayat in Narharpur administrative block of Kanker district in Chhattisgarh. Though 99% of the families own land, they used to migrate to other cities for work. The yield from their land was not enough to meet their financial needs to even buy inputs for the next sowing season; they needed other employment.

Mahatma Gandhi National Rural Employment Guarantee Scheme (MGNREGS), implemented in Narharpur block, particularly in Masulpani panchayat, has curbed distress migration of farmers. In the last seven years, MGNREGS has transformed the village and villagers of Masulpani. The villagers are relieved that they have a local livelihood, especially during this pandemic.

In Narharpur block, agriculture is the main source of livelihood. Erratic rainfall is a major concern to the agrarian community, leading to loss in kharif crop and distress among the farmers. With depleting groundwater ‘har khet ko pani’ or ‘more crop per drop’ is not feasible through bore wells and large dams because of issues of affordability and, social and environmental implications.

Under such circumstances, people were forced to migrate a decade ago, due to food insecurity and lack of local employment. In a panchayat like Masulpani, with a majority of tribal population, despite owning land, more than 30% of the families used to migrate for six months to work as agriculture labor for big farmers in places such as Kurud, Bhatagaon, Dhamtari.

They migrated to these places that are 50 to 80 km from Masulpani. Given the lack of road connectivity and travel costs, they could not commute every day. Men and women migrated and stayed at the destination sites for four to six months. Those who stayed back in the village took care of the farming.

MGNREGS is one of the largest employment generation programs in the country since its inception. The program is designed to provide employment to the rural masses to check distress migration and to facilitate creation of assets in rural areas.

MGNREGS is the biggest hope across the country for providing employment and reviving rural economy during the current lockdown due to COVID-19 pandemic. Central and state governments are emphasizing on MGNREGS and taking measures for early payment, increasing work demand and so on.

Allocation of Rs 40,000 crore of additional fund by the finance minister is very promising in this crisis period. All over the country MGNREGS work is going on in full swing. Providing employment through MGNREGS is an immediate and short-term relief amidst the pandemic situation.

Employment under MGNREGS is very significant for rural income, but it is a short term measure and not sustainable. In the last three years, Professional Assistance for Development Action (PRADAN) has put in a lot of effort to change the perspective of the local administration, community and other stakeholders regarding MGNREGS.

Instead of seeing MGNREGS just as an employment scheme, people have to see it as an opportunity to create and support sustainable rural livelihoods. Collaborating with community-based organizations, panchayat raj institutions and administrators, a decentralized planning and livelihood generation through MGNREGS has been done with a long-term goal in Chhattisgarh.

In general, individuals get their own plans sanctioned by approaching the panchayat. The marginalized are often left out in this process. However, in Narharpur block, all the villagers were involved in the planning, after evaluating the existing resources.

Such decentralized community-based planning is a move to boost the rural economy and also to make farmers self-sustainable, utilizing their own resources during and after such unexpected crises as COVID-19. Community-based planning, awareness and ownership of people and administrative willingness have significantly reduced distress migration.

Masulpani is the area that had huge potential for MGNREGS. The farmers did not believe that water harvesting and recharge structures could make agriculture a sustainable livelihood. People were hesitant to create such structures in their land as they perceived it as loss of their land.

But with continuous interaction with the local people, exposure visits to other blocks and sharing of success stories, their perception changed. The local administration encouraged community level works like community ponds, roads, etc. In the last three years, around 60 farm ponds and four dug wells have been constructed under MGNREGS in Masulpani.

The scenario has changed in these years and the local economy has improved. Due to additional income from MGNREGS wages, people are able to grow crops in their own land. It provides them with money to buy agriculture inputs, leading to increased production.

In Narharpur block, where more than 22,000 families reside, now the youth who migrate number less than 1,000. In Masulpani panchayat, less than 1% of the residents migrate. They migrate for different aspirations and not for lack of livelihood.

“MGNREGS and PRADAN staff visited each land in our village to make plans. We could plan many structures and get them sanctioned,” said Kunti Kallo, president of Village Organization at Masulpani village. Accompanying the staff helped the community to understand their resources of land, water, labor, livestock and forests, and the potential of each at a different level.

Participatory planning discussions were organized in every village, to prepare a comprehensive plan, considering water budget and land use. Tools based on geographic information system (GIS) were used to understand the water storage, storage zone and the like.

Natural resource management works on private lands under MGNREGS are proving to be the most suitable and climate resilient option in today’s scenario. Farm ponds help farmers use water as protective irrigation in dry spells. The average productivity of paddy has increased from 2 tons to 3 tons per hectare on an average.

In the lockdown period, although farmers are apprehensive about availability of agricultural inputs, they know that water will be available, and they can manage with their conserved seeds and organic practices.

Not only in Masulpani, but in the entire Narharpur block, 2,200 farm ponds have been constructed in the last three years. More than 1,000 households have been benefitted through land leveling and farm bunding works in the entire block. Farm bunding has also helped retain moisture and reduce run off.

Rearing fish is the villagers’ new, additional livelihood. Last year, in Masulpani, 30 families were engaged in fish rearing activities in their individual farm pond, where water remains for more than eight months. This provided an additional annual income of 15,000 on an average to each family.

“During the lockdown, when markets are locked, and we don’t have vegetables, we eat fish. Those who rear are supplying to other families also. Consumption of fish has increased during the lockdown as it is readily available,” said Dhruv Saroj of Masulpani.

In the last financial year, 43% of the families got more than 100 days of work. About 96% of the total work done is under natural resource management. The average labor days in Masulpani panchayat is 86.84, whereas it is 76.86 days in Narharpur block and 54.21 person days in the state in the last three years. Assets worth Rs 50 lakh have been created in the panchayat.

In this difficult crisis period, the panchayat has sanctions for sufficient works, which can provide employment to every worker in the panchayat. “During the last two months of lockdown, we had sufficient work in our village. I have already worked for 42 days,” said Kunti Kallo.

The stakeholders are working towards rejuvenating Jurra Nala flowing through the Masulpani panchayat. Also, various drainage treatment measures are planned, to check soil erosion and siltation, and also to help ground water recharge.

“With MGNREGS people can change their village,” said Gangaram Kodopi, former village chief of Masulpani panchayat. “It gives wages for today and sustenance for tomorrow. It can strengthen livelihood of people and can secure future generation.”

The COVID-19 pandemic will impact rural livelihoods to a certain extent, but the villagers are confident, knowing that they won’t go hungry. This experience shows that we need to look at MGNREGS beyond wages and link it to boost rural economy through different agri-allied interventions.

As a result of collective planning and awareness around MGNREGS, today all the 45 panchayats have sufficient sanctioned works. Harnessing the potential of MGNREGS with administrative will and community ownership can provide livelihood in rural areas, especially during disasters like the current pandemic.