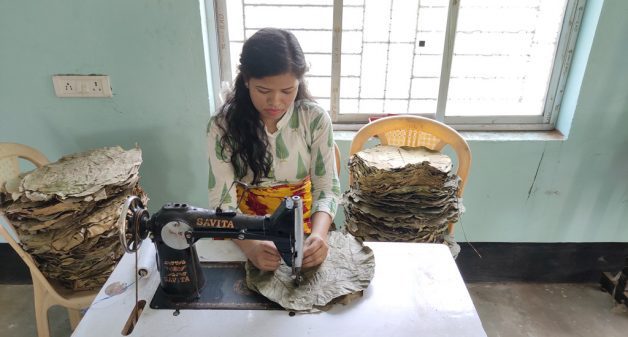 “Sal leaves have brought a significant change in my financial condition and have increased my income twice or thrice of what I used to earn earlier,” said Uttara Sardar, a homemaker in a village at Jhargram district of West Bengal.

The 30-year-old is a member of a self-help group (SHG) that makes plates and bowls out of sal leaves in Jhargram. She is among the 150 women who work at the Center of Excellence for Sal Products established by the state government to promote items made from sal leaves and sabai grass.

Women have always made sal leaf products. However, the current government project helps them get the right price. With increased awareness about using ecofriendly products, the plates and bowls made by the women are in demand in many states, helping the women avoid market exploitation and earn better.

After joining the SHG about a year ago, she has been making sal leaf plates and earning around Rs 3,000 per month. The income helps her send her two daughters and a son to school. “It helps me take care of my household expenses also,” she said, while working on molding machine to give circular shape to the plates.

A few meters away, Chaitali Sardar was busy stitching leaves together on a sewing machine, before they are made into plates. Youngest of the group, the 20-year-old had to discontinue her studies after class X, after her father’s demise. Instead of opting for other jobs, she decided to join the center.

“It is very difficult to earn a decent income through tuitions, as people in villages are reluctant to pay local teachers and often end up giving very less,” Chaitali Sardar told VillageSquare.in. “Now I have not only learnt an extra skill of making sal plates, but have also become independent.”

The state government started the project of making plates and bowls – called pattal and katori locally – from sal leaves early last year, with an aim to offer livelihood to several thousands of women who were either doing odd jobs for survival or were homemakers.

According to government officials, more than 22,000 women in five districts of West Bengal – Purulia, Bankura, Jhargram, Bardhaman and Birbhum – make various items from sal leaves. The government focused on the five districts of the state because of the large number of sal trees present there.

“We started it to tap the high volume of sal leaves in these five districts,” Mrityunjoy Bandyopadhyay, chief executive officer of West Bengal Khadi and Village Industries Board (WBKVIB), told VillageSquare.in. “Women used to make sal leaf plates even before the government intervened; but the sector was unorganized and the women incurred losses when the demand was low.”

The women can sell the products to any buyer who offers a high price. “The aim is to stop the economic exploitation of the women who were even forced to sell a 1,000 plates for Rs 20-Rs 30 because of no demand. We have tried to put a bar on such nefarious activities,” said Bandyopadhyay.

“We started work after the state government gave us stitching and molding machines for free. We run one of the largest SHGs in Jhargram with over 150 members who have been making plates and bowls,” said Madhumita Parhai, treasurer of Jhargram Block Mohila Aronya Sundari Mahasangh.

The SHGs supply the finished products to the government, which pays them 70 paisa for every plate. The government then sells the products to wholesalers in Kolkata and other states. “Apart from the plates, the women make bowls too. We pay Rs 15-30 for 100 pieces of sal leaf bowls depending on the size,” said Biswajit Sarkar, planning-cum-valuation officer of WBKVIB.

“The awareness campaigns to replace plastic with bio-degradable products have been helping us boost the sales,” Biswajit Sarkar told VillageSquare.in.. “Even religious institutions are switching to sal leaf plates and bowls.”

According to government officials, 2,200 SHGs and more than 22,000 women across the five districts have gained economic stability by making various items from sal leaves. “The annual turnover is around Rs 30 lakh, but it could be more since several women and SHGs are also trading individually in addition to selling to the government,” said Sarkar.

The project has helped many women, like Meenakshi Mahato (48), who works at Jhargram, earn well. “My husband is an employee in a private school and the income is enough to run my family. But still this work is a good way to spend my spare time and also to buy my medicines as I am a diabetic,” she told VillageSquare.in.

Hundreds of women who collect sal leaves from the forest also benefit because of the project. Sushila Mahato of Salbani village in Jhargram goes to the forest near her village every day, to collect sal leaves. The 62-year-old says that she earns around Rs 3,500 every month after supplying 15,000 leaves to an SHG.

“I have been collecting leaves for the past several years but the income was not consistent and sometimes our hard work didn’t translate as enough money. But now the income is consistent,” she said. All the women echo her statement about consistent and increased income.