Distance to host city, commitment of employer and livelihood opportunity at native village help returned workers decide on post-lockdown migration. Till then they cope with available resources 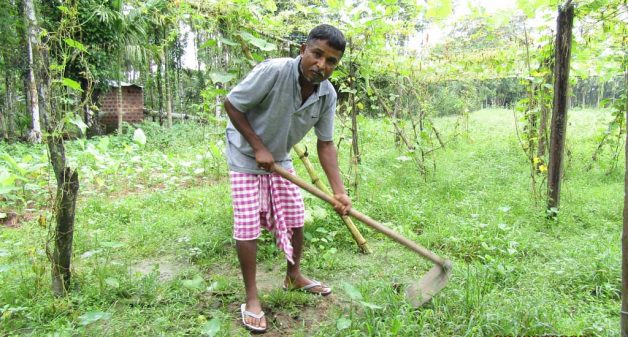 For many returned migrants like Jagendra Rajbhonsi, seen here working his homestead land in Chirang, there is no local avenue for a livelihood (Photo credit: Yapi Kop)

My colleagues and collaborators visited a number of migrants and talked to them about their experience, trauma, current status and future plans. In this note we present patterns of situations and experiences shared by some returned migrants.

Since millions of migrant workers have returned to their villages for an indefinite period, the spectrum of experiences and situations they currently encounter must necessarily be very broad. Hence we make no claims about these being representative patterns.

Our aim is to indicate a broad range of what the returned migrants, jilted by COVID-19 in their dream of better incomes and inconsiderately discarded by their host towns and cities, face when they are back home. READ: Returned migrants: A pause or the end of a dream?

Bikram Sarma is a young man of 22 years. He comes from a farming family and has a quaint house with some land attached to it. He studied in the local school till class IX. Four years ago, he approached a local agency which trained him to be a security guard. The agency sent him to Hyderabad, where he worked as a security guard in a residential society.

After the lockdown, he returned by a Shramik train in late May. The employer made no effort to help him and his colleagues from other places to stay on in their place of residence. Nor did the employer help them get ration when the city locked down.

Fortunately, his employer cleared his dues and Sarma could come back with his savings. He has since then been working with his parents on their land. Though his employer would like him to go back to Hyderabad when the situation improves, Sarma is reluctant to go. The employer offers neither a change in terms of employment nor any security of a home or food supply.

Sarma and his parents are worried that a repeat of the situation will see him facing similar acute trauma of being stuck in a hostile city, terrible journey and exposure again. So Sarma has decided to plant areca nut trees on their farm. Till the trees grow, he plans to work on neighbors’ farms. He does not want to go back.

Biswanath Boro is a 24-year-old unmarried young man, who has studied till class V. For a long time, he has been working in a factory that makes wood powder for sale to plywood manufacturers. He worked in a place near Guwahati, 30 km from his home.

He was staying with friends and coworkers in the factory premises. When the lockdown was announced, the factory had to close. The owner paid their dues and sent them off in early April. He returned home without much trouble.

Boro has been working with his parents on their farm, for such work as is needed as of now. He has remained in touch with his employer. The employer has spoken to him three or four times and has expressed the desire to take him back when work starts. Boro can stay again in the factory premises, so accommodation is not a problem for him.

Boro is in two minds. On the one hand, staying at home feels so much secure, and on the other, they do need the money he would earn in the factory. Though he is in two minds as of now, there are good chances that he would return to work.

Jagendra Rajbhonsi, who is in his early forties, lives in Chirang district. He needs to support his family of five. Their village is close to a forest range. Elephant attacks on farm lands are a common occurrence here. To supplement their farm income he had migrated to Kerala.

He is back now and could bring only a limited amount of money compared to the usual annual scenario. He is stuck now. He needs to earn for his family. “How long can we go on? Occasionally I do work on our little land to produce vegetables. But these we will need to eat at home. And paddy is so uncertain given the elephant menace,” he said.

He must migrate and work somewhere but is deeply concerned about even buying a passage back to Kerala, now that the atmosphere about travel to such far off places, besides work and accommodation are so uncertain.

In his own village, Jagendra knows Surendra, who returned from his work place, and now has no work. Surendra’s family has had to cut down the number of meals each day, and do not know for how long they would get even two meals. The local church and free ration do help them, but there are expenses other than for grain.

Moving westwards, Ramesh from a large village about 140 km from Indore worked in the city as a commercial painter. His employer did the wall paintings for clients who used that as advertising medium. When lockdown hit, the employer did not throw them out but gave many of his coworkers a small room to live. Ramesh managed to live there for 45 days but longed to be with his family.

As Indore was a Red Zone city, lockdown was complete and no transport in or out was possible. Finally, he took a bicycle form his owner paying him Rs 800 from his earnings and came back with some Rs 2500 cycling the distance, fearing police to accost him and punish him for breaking the law.

Having reached, he now lives with his family of four children and wife on his meager savings. He has no land. His wife works as domestic help in the village. Together they used to eke out an existence, living on an annual income of Rs 80,000 for the six of them.

Now much of that income is gone as he still has no hope of starting his regular work for some time. He is doing some odd painting jobs and supplementing his wife’s earning. He will go back at the first opportunity.

From further west, we have the story of Ajaysingh Bhilala from Jhabua district. He and his wife worked together in a salt factory near Ajmer. Together they earned about Rs 700 per day. The factory owner gave them a place to stay as well.

However when lockdown was announced, the factory closed and they were out of job. So they came back to their village in a group of 10 persons, hiring a taxi, traveling in apprehension of being stopped somewhere in their 500 km journey.

The Bhilalas have a small plot of land in which they can only grow maize and a little cotton during monsoon. In a whole season, they earn no more than Rs 20,000 from these crops and there is nothing else they can do to make ends meet. So they long to go back, and their owner is also keen to have them back as quickly as possible. They will return once their farm operations are over.

From these patterns we see three things distinctly. Those who had migrated long distance have much greater reservations in restarting their migrant life again. They cannot find the money to travel, they have perhaps somewhat fickle contacts whose word they cannot much trust and they have no social support in the host cities.

On the other hand, those who have been going to work in nearby towns and cities find it easy to resume their work and are eager to do so as soon as the normal kharif operations get over. But none of these cases seem to indicate that the returned migrants could use the same skill they deployed in the city for their livelihood in their village to which they have now returned.

Names of individuals and of places have been changed to protect privacy.