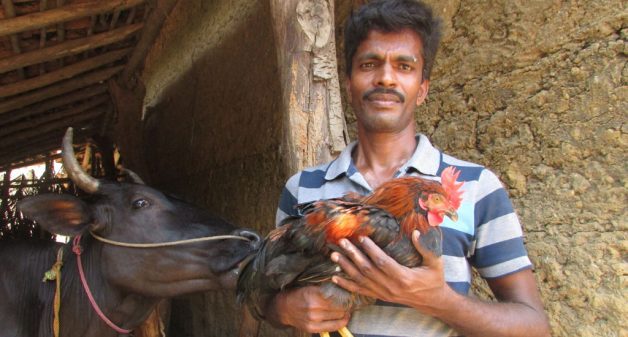 Dattatraya Sawant, a farmer, coordinates with villagers and other stakeholders, to improve livelihoods and make Nivaje a model village (Photo by Hiren Kumar Bose)

It’s 5.30 in the morning and Dattatraya Sawant of Nivaje village is already in his ‘porsu parda’ (a patch of land close to a dwelling) where he grows a variety of vegetables for his seven-member family which includes his aged parents.

He returns home around six in the evening, having performed tasks in between, like accompanying villagers to the bank for loans, ferrying agriculture department officials during their trip to the fields, encouraging villagers to invest in cattle heads and championing the cause of nutritional security through backyard poultry.

In addition, Sawant canvasses support for installing household biogas plants, attends the monthly panchayat meeting, interacts with NGOs and at times indulges the agri-tourists during their village stay. He does all these with dedicated passion sans any pecuniary benefit.

“Once paddy has been harvested, we begin work on our porsu parda around January which provides us vegetables till May,” Sawant (40), told VillageSquare.in. Sawant resides in the 350 household strong Nivaje village, spread in five wadis (hamlets), 30 km from Kudal railway station in Sindhudurg district of Maharashtra.

For want of a better title, he is known as the village coordinator, designated so, by Bhagirathi Gramvikas Pratisthan (BGP), a non-profit organization working in Sindhudurg district since 2004. For it is individuals like Sawant and a couple of others who have made this sparsely populated village an adarsh gram (model village) in eight years, with munificent support from BGP.

Nivaje has become a sustainable community that is able to generate and maintain the resources necessary to improve its level of well-being, by strengthening the sustainability pillars of livelihood, infrastructure and services.

Like most villages in Sindhudurg, houses in Nivaje are made of laterite bricks with sloped roofs, suitable for the incessant rains the region experiences. Most people here practice rain-fed farming, growing paddy, finger millet and lentils during the rabi season; and vegetables in the kharif in landholdings that measure between two and five acres.

Eight years ago, this was the same village that had spurred the local anganwadi worker to approach BGP to address the issue of incidences of malnutrition. The progress happened despite the Saansad Adarsh Gram Yojana that remained a non-starter after nearly five years of its launch. Under the scheme, Members of Parliament (MPs) have to adopt villages and develop them as model villages.

The idea was that each MP would adopt three villages each in three phases between 2014 and 2019, and five villages between 2019 and 2024. According to the latest state performance and action plan report of the Ministry of rural Development, 35% of the projects planned under the scheme have not even started so far, while 13% are in progress. About 52% have been completed.

Surrounded by dense greenery Nivaje, like other villages in the district, has been dependent on the forest for its fuel needs but not anymore. Not because they are the beneficiary of the Pradhan Mantri Ujjwala Yojana but because of the biogas unit in their backyard.

The first biogas unit was installed in 2012 at Sawant’s house, with a loan provided by the local bank. Presently, Nivaje has 130 biogas units which run on cow manure, poultry droppings, fish and human waste. BGP has helped set up nearly 8,000 biogas plants in Sindhudurg. In addition to significantly reducing indoor pollution, the biogas plants have enabled farmers to shift to organic farming, as the slurry is used as fertilizer.

“Kitchen is no longer a place to be feared due to the smoke which caused eyes to burn, aggravated breathing issues and left us irritable,” said Jyoti Pawaskar (45), a progressive farmer. “Using pressure cookers on biogas stoves, we save time to attend self-help group meetings and indulge in stitching, making papad and pickle.”

Pawaskar grows paddy, owns 16 cattle heads, runs a layer poultry farm with 100 hens, has an irrigation pond and is presently setting up four vermicompost pits – all achieved through bank loans. The irrigation pond she built has led to an increase in water levels in the neighborhood wells.

Till very recently the inhabitants of Nivaje used to queue up at the local shop of the public distribution system for their monthly rations which included their staple diet rice. This year they sold 22 tons of rice to the authorities, priced at Rs 2,600 per quintal, because of boosted production with System of Rice Intensification (SRI) technique.

Beginning with an acre in 2017, Nivaje presently has 300 acres under SRI. From 30 quintals per hectare, the production has jumped to 60 quintals, thanks to a project initiated by the state’s Department of Agriculture. Under the project, 25 farmers received guidance on all aspects of paddy cultivation – from preparing the fields to selecting the right kind of seeds.

“Can you imagine what can be achieved if Nivaje village’s entire sweep of 1,500 acres of arable land is brought under the SRI cultivation method,” Nilesh Ugewekar, agriculture supervisor, Mangaon, told VillageSquare.in.

The setting up of the dairy in the village in March 2018 has ushered in prosperity and has become a dependable source of livelihood. It began with 20 liters of milk and within two years the dairy’s production has reached 200 liters. Till date, the 45-member dairy cooperative has made business worth Rs 34 lakh.

“The milk is collected twice a day and taken to the chilling center 20km away,” Abhay Parab (30), the dairy-in-charge at Nivajeshwar Milk Producers’ Cooperative Society, told VillageSquare.in. Parab returned to his village for good after working in a Goa-based toothbrush making unit for four years. When not in the dairy he farms on his family’s six-acre plot or takes care of his two buffaloes.

Be it the setting up of a biogas unit, acquiring cattle, constructing vermicompost pits or raising a poultry shed, it’s Sindhudurg District Central Cooperative Bank (SDCB) that has been supportive of all the livelihood promotion activities of Nivaje.

“So far we have issued loans to 250 individuals for various purposes,” Bhagesh Bagyatkar, Development Officer at SDCB, told VillageSquare.in. “We have not come across any incidences of payment defaults. In fact, we have several cases of repayment made before time.”

In Maharashtra, the mention of a model villages bring up two names, Hiware Bazar and Ralegan Siddhi. Though Nivaje is yet to be officially recognized as one, it too has lush fields, tar roads, hygienic surroundings, a well-furnished gram panchayat and a digital school. It is energy resilient, self-sufficient in its grains, and importantly each villager has his/her own livelihood to pursue.

Nivaje’s development activities have caught the attention of urban dwellers, with tourists from cities like Mumbai and Ratnagiri, and even students from Australia wishing to visit the idyllic village and experience rural living. For two successive years, Nivaje has hosted 25 engineering students from Australia, brought under a cultural exchange program by Authentica, a Pune-based experiential learning firm.

“Two years ago the villagers pooled their resources to buy utensils which they hire out to neighboring villages for functions. One is amazed as to how the villagers come up with ideas to monetize their activities,” Prasad Deodhar, director, BGP told VillageSquare.in. “The village is an outstanding example of what rural empowerment can do.”