With the dug well drying up in summer, women who lost time in fetching water and hence wage work, got a bore well drilled to fulfill their water needs 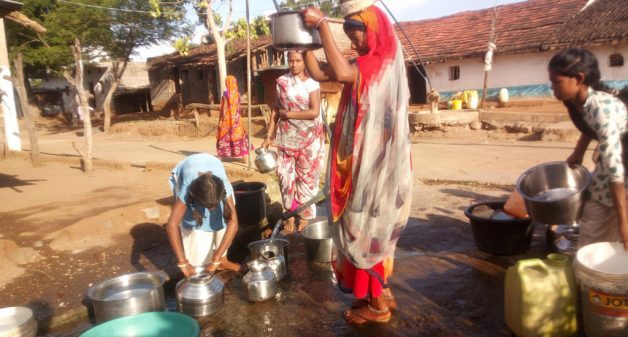 Getting a motor fixed to the hand pump has helped women of Amulla Khurd get drinking water easily. Saved time helps them take up work (Photo by Ajeet Kumar)

Amulla Khurd is a village in Burhanpur district of Madhya Pradesh, located about 85 km from Burhanpur city, the district headquarter. It has a total population of about 1,400. People from 13 different communities reside in this village, Korku and Gond tribes forming the majority of population. People from Korku community, a Scheduled Tribe, form around 80% of the total village population.

For their livelihood, residents of Amulla Khurd village depend on farming, animal husbandry, daily wages, fishing and sale of forest produce such as mahua flowers and tendua leaves. Villagers rear cows, buffalos, goats, pigs and poultry.

Maize, moong and soya bean are the major crops grown in the area. People with smaller land holdings, mostly from the Scheduled Tribe, migrate to Maharashtra for wage labor work. Often they migrate as families, during the lean agricultural season of October and November.

For the villagers, access to clean drinking water has always been a problem. A single dug well catered to more than 60 households. Women belonging to the village, after repeated efforts and representations at various levels, ensured that a bore well was drilled in their village to cater to their drinking water needs.

According to Lalita Bai, a 33-year-old woman of Amulla Khurd, before 2009, people from her village used to fetch water from a nearby dug well. Water from Mithiya, a rivulet running by the village fulfilled the villagers’ domestic water needs.

The 50 feet deep dug well was their only source of drinking water. However, it would dry up during summer, and people came together to drill a bore well and install a handpump in the village in the year 2009. The panchayat offered financial assistance.

However, Nandai, a 35-year-old woman said that even the hand pump did not resolve the drinking water woes of villagers. People, mostly women, used to fetch water from the hand pump from 4 am. But by 6 am, the hand pump would run dry. Those arriving late had to wait till the bore well recharged.

Nandai said that because of the time they spent in fetching water from the hand pump, many of the women from Amulla Khurd had to often miss their daily wage work. Their work in farms in nearby villages or at construction sites earned them Rs 150 to Rs 300 per day.

By the end of year 2016, the hand pump became dysfunctional and people again started fetching water from the older dug well. “The quality of water in the dug well had by then deteriorated, owing to people abandoning its use after 2009,” Ram Lal, a 36-year-old resident of the village, told VillageSquare.in.

To address the problem of water shortage in the village, women of Mahakali Self-help Group from the village, led by Lalita Patil, one of the members, raised their concern in the gram sabha.

“They visited the village panchayat and spoke to panchayat raj institution representatives several times, but it did not help,” said Sanjeev Tiwari, cluster manager of Aga Khan Rural Support Program India (AKRSPI). Since AKRSPI has been working towards women’s empowerment, Tiwari was well aware of the women’s struggles.

“When we did not get any reasonable response and action on our complaint even after visiting the panchayat several times, we approached the district magistrate (DM) of Burhanpur and we requested him to approve a submersible motor to connect with the bore of the damaged hand pump to get water regularly,” Lalita Patil told VillageSquare.in.

Eventually, after meeting the DM, the women of Amulla Khurd got a water pump within three months. Patil said that it took six months of her and other women’s relentless effort, from submitting a proposal in the gram sabha in January 2017 till receiving the pump for drinking water in June 2017, through the district magistrate.

Women residents of Amulla Khurd look after the maintenance of the motor. If it requires any repair or replacement of parts, households that use the motor contribute equally among themselves for its upkeep. The electricity bill for the motor is distributed equally among the user households, as subsequently other bore wells have been drilled and not every household uses this.

The women’s efforts have not only saved their time for fetching drinking water, but has also helped them earn their daily wages which they lost earlier in the excessive time spent in fetching water. Lalita said that it has also obviated the frequent misunderstandings that cropped up when those who came late could not get water. The women are striving to assist other villages where drinking water problem exists.

Ajeet Kumar is a development practitioner, who was earlier associated with VikasAnvesh Foundation.