Under an umbrella village organization, members of women self-help groups address common problems in their village, including a stand-off against a mining company 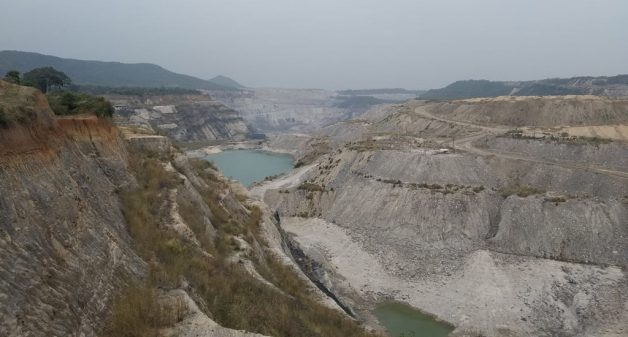 Coal mining has created barren valleys near Rampur village, the residents fighting against mining in their village (Photo by Kailas Kokare)

Santhal tribes form the majority of population in Rampur village. The villagers retain their traditional way of life and religion. Over a period of time, some of the Santhals adapted Hinduism and Christianity. Alcohol consumption and domestic violence were common in the village.

Agriculture is their livelihood. The villagers were not in the habit of saving. When in need, they pledged gold ornament or the like and borrowed money from the mahajan or local money lender. They paid the money lender a monthly interest that varied between 5% and 10%.

About 10 years ago, women self-help groups were formed. Establishing self-help groups and a village organization has not only transformed Rampur village economically, but has given the villagers an opportunity to come together to discuss and resolve social issues.

The more fundamental change that can be observed is the unity among villagers regarding their fight against the encroachment of coal mining companies that want to take over their village and agricultural lands that have traditionally been handed down from their ancestors.

When representatives of a local non-government organization (NGO) visited Rampur village in early 2008, villagers were suspicious. The NGO’s representatives told the villagers about forming multiple women’s self-help groups that would collect money on a weekly and/or monthly basis and save it for domestic needs later.

Saving was foreign to the villagers. “Initially, we were scared to believe some unknown people who were asking us to save money,” said Savitri, a resident. “We wondered how to trust them, and worried that they might take our money and leave.”

The villagers thought that their agricultural practices were fine as they had been following the same over many generations. After the NGO’s representatives explained everything in detail, the villagers were convinced. There was consent to form women’s self-help groups (SHGs).

The women started saving money, from what they received from their husband, but mostly from what they earned as daily wage worker. While men started pitching in the saving, women got a role in financial decision making at home. Incidents of domestic violence and alcohol abuse also came down.

Over 10-plus years, the SHGs have evolved to more than fulfilling financial needs. The SHGs run by the women offer loan at a minimal interest of 1%. The money is saved in the bank and everyone gets a book with a record of transactions. This ensures transparency and accountability.

Villagers use the money for multiple purposes such as construction of house, children’s education in private schools, investment for agriculture work, medical expenses, etc. With financial empowerment and social acceptance, the women have become confident.

After setting up 10 women SHGs, nurturing a few women’s leadership skills and providing necessary trainings, the women have formed a village organization (VO), with elected leaders. All the SHGs came under the VO umbrella, where they decided to work on the common problems that the community faced.

The challenges included children at the day care center not getting nutritious mid-day meal, lack of toilets, unavailability of common town road, and the like. Improper implementation of Pradhan Mantri Awas Yojana or Prime Minister’s Housing Scheme, and corruption in implementation of government schemes were also some of the other problems.

Earlier the villagers had very few opportunities to come together and discuss common issues. “Except with very close neighbors, women did not interact with anyone,” said Mery, a member of an SHG. The awareness about their rights and various government schemes was limited.

After forming the VO, members of all the SHGs started coming together once a month for a meeting. The women invite the village leaders for the meetings. Sometimes men are also present in the meetings since they are also interested in the development activities. The meetings provide good opportunity to raise questions and concerns about the issues, and find solutions.

The village organization has resolved many issues and has built a common road, toilets and homes in the village through government schemes. They have started sending their children to school. Farmers get improved yields. Many farmers have planted mango trees and get good seasonal income from the same.

The village falls in Godda district and the land is rich in coal deposits. A coal mining company has been active in this region for more than three decades. Villagers who voice their opinion against the mines often get threats. The company has made countless attempts to encroach or acquire the village land, by manipulating local leaders and by bribing men with very expensive gifts including vehicles.

The residents of Rampur do not want to leave their land until they are compensated properly by coal company. They want a good agricultural land in place of their own and a job with the company.

The conflict started when the mining company wanted to take over the farming land after finding coal reserves. The villagers have written to local as well as block and district level government officers but do not expect them to act on their complaints.

The company does provide job for families that have more than two hectares of land, but the documentation and division of land within the family have not been done properly. It also provides a house at the rehabilitation site as compensation as well as money.

However, residents of Rampur have witnessed the rehabilitation of their relatives and residents in neighboring villages. They opined that those villagers have not been rehabilitated properly and do not want the same to happen to themselves and their future generations. “Nothing can replace our land. Why should we give it? We are getting nothing in return,” said Sonoti, a villager.

Villagers are suspicious of strange activities or any new individual arriving at their village. Villagers opine that the company agents are creating divisions and conflicts between those residing in the village and the youth who have migrated for work. The issue has been taken to court. The villagers said all that they wanted is peace.

Monsoons have been erratic in the last five years and the farmers have not progressed further. The water level of the village has gone down. The water even tastes of coal. Though the villagers have worked under the aegis of the VO on many of the problems, they are uneasy since their future is uncertain because of the impending coal mining activities.

The coal company has encroached some farmers’ lands where the mango trees have been planted. As the mine is near the village boundary, agriculture land is slowly diminishing. The conflict among the stakeholders and the apprehensions of the villagers regarding the rehabilitation process need to be resolved. Yet the villagers remain hopeful of a better tomorrow.

*Names of village and residents have been changed to protect privacy