Despite a meager income, inability to avail government benefits and their children missing education, the traditional medicine men continue their trade among loyal rural clientele 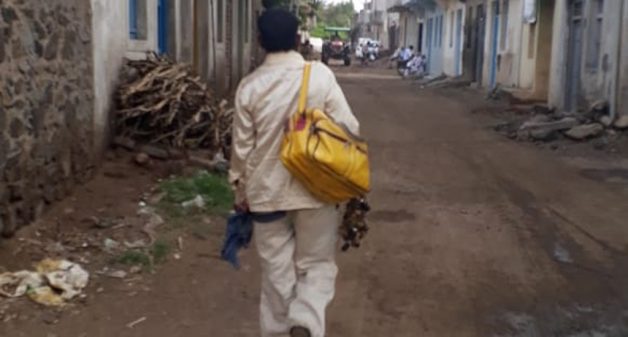 Despite meager income, the traditional medicine men of Molesalam community hawk their medicine, going from one place to another (Photo by Shilpa Bhakare)

In a village near Jamnagar city in Gujarat, a middle-aged Fateh Singh, wearing shiny clothes and a colorful bag was walking through narrow lanes, hawking his traditional medicine, locally known as desi dawa. His call was almost lyrical, challenging people to pay after three months, only if his medicine cured the ailment.

He did not get any enquiry for a considerable time, and his walk through criss-cross lanes seemed endless. Slowly, his voice became slightly desperate while emphasizing on instant cure for chronic joint pains and skin diseases.

At the entrance of a sleepy lane, an old woman with pain in one leg called him. He had found his first patient of the day. Fateh Singh examined it and declared that it looked like sciatica. The family seemed impressed and asked for his advice.

Men like Fateh Singh, belonging to the nomadic Molesalam community, prepare oils and powders as traditional cure for many ailments. With the number of people who prefer traditional medicines decreasing over the years, their income has come down. Yet they continue to practice their traditional trade.

Fateh Singh had a unique business strategy. He started by claiming that he would charge for his treatment after three months, on his next trip. Slowly, while taking out small bottles of oil, containers of powders, and herbs wrapped in colorful cloths, he offered a mixture of medicines.

He told the family that they needed to buy only one ingredient and it was expensive. He did not insist that the family should buy it from him, but gave such detailed specifications that it sounded like the family would not find it in any Ayurvedic shop.

Finally the family decided to buy it from Fateh Singh for Rs 100. He prepared the oil and instructed the old woman how to use it in a unidirectional manner for massaging. Since there was no consultation charge, and payment was only after the cure, someone in the next house called him to take a look at his chronic skin disease.

“Though you may feel that business is good, it is not enough to feed all the mouths at home,” Fateh Singh told VillageSquare.in. “I also have to spend on commuting to different places every day.” After spending four hours in the village and its periphery, he reached home.

Home was a plastic sheet tent erected on a muddy and visibly filthy ground on the outskirts of Jamkhambhaliya, a small town. There were five other families with almost 25 children between the age of seven months and 15 years, wearing colorful but torn clothes.

Their life has always been nomadic, but in monsoon they tended to live in Thangadh of Surendranagar district, their native place. However, due to COVID-19 pandemic, they could not sustain themselves at their native place and decided to leave to earn some money in spite of the rains.

“The business is dull and it is hard to make both ends meet. In the good old days, many people would trust us and we managed to get considerable income,” Lalji the leader of the group, told VillageSquare.in. “Things have changed a lot as there are doctors everywhere and educated people have trust issues. However, we do have loyal patients who call us to ask for massage oil, some medicines, etc.”

He proudly showed some photo frames in which success stories of his medicines were displayed. He said that he specialized in making childless couples happy and emphasized that he never failed them with a girl child. “If the couple follows my advice, there will be a son. I can guarantee,” he said.

They purchase raw material herbs like Ashwagandha, Shatawari, etc. oils and choornas (powders) from Ayurvedic shops. But, the community insists that they have their own preparation method which is not written down anywhere and that it is oral knowledge passed on from one generation to another.

Generally, these traditional medicine men travel in small groups and put up tents in specific places in the destination town. For example, they have been staying on the same ground in Jamkhambhaliya for the past 15 years. Though it turned into a filthy low lying area due to highway construction, they prefer the same place.

Being regulars, the community has connections in nearby places for their routine work. They charge their mobile phones at a small shop at the rate of Rs 5 per phone and the local tea stall owner does not insist on payment on a daily basis.

They have goats, pigeons and motorcycles with them, and they hire a vehicle to move from one town to another. However, once settled, they travel by bus and then on foot, or some young men use their motorcycles to explore business opportunities in nearby villages.

The usual strategy is to visit a village for 2-3 days to ensure complete business and then move to another village in the periphery. They live in the same place until they feel they have exhausted all business prospects. During pre-COVID-19 days, on the village market day, they used to set up shops instead of moving through lanes for selling medicines.

Currently, the community, especially children look famished. Sometimes women can be seen begging in the market. Their plastic sheet tents barely give them shelter. Whatever belongings they have get drenched on a regular basis. They cook on earthen stove and they cannot save the firewood from rain.

Some of them would like to take up some other work but it seems difficult as they do not have any other skills. Though some young men occasionally take up work on farms as casual laborers, the older generation does not appreciate it.

“It is our traditional trade and it is also a service. You need to have the knowledge to be able to treat people. My father, his father and his grandfather also did the same. We cannot just quit this profession,” Jusabhai told VillageSquare.in.

Their children do not go to anganwadis or schools as they keep moving with their parents, missing out on education and nutritious food. They look malnourished and fatigued as they are exposed to the weather all day, without much food.

Due to the nomadic nature of their lifestyle, they are considered ‘permanent outsiders’ even in their native village and do not get benefits from public welfare schemes like ration, state-sponsored health insurance, mid-day meal in schools, work under MGNREGS, etc.

They feel that their practice may not be looked upon as valid and intuitively, they stay away from formal government institutions. Undoubtedly, poverty has to be tackled aggressively and the community on its own does not seem to be in any position to do so. Due to their invisibility, no civil society organizations work with the community.

Without taking a moral stand against this practice, society ought to think about their dignity. In remote villages, people still trust them. The medicine men have loyal clientele but it is depleting steadily. While focusing on public health interventions under National Health Mission, the possibility of studying their current practices can be explored.

We call them quacks but, is there a possibility to use their connection with people by some training and capacity building? Redistributive schemes of welfare programs may temporarily improve conditions of acute poverty, but it is less likely to change their vulnerability in the long run. Therefore, they need alternative employment if they discontinue their traditional profession.

For the children, poverty is an overarching phenomenon and detrimental to their health and education, and its consequences. Their living conditions decide their destiny as they will never have choices about the place of residence, food and educational opportunities.

How do we break this vicious cycle? There has to be a fundamental shift in the commitment of the state to the most disempowered segments of the population. The intervention for education needs to be developed after understanding their nomadic lifestyle.

Possibility of starting Integrated Child Development Services (ICDS) centers and schools on wheels in each district can be explored to cater to the needs of these and other migrant children. Without a workable implementation strategy, the rights based approach, ensuring their right to food and education would remain unattainable.

Though there is a sense of loyalty towards their traditional profession, there is also a reluctant understanding that their children might not be able to survive on this. However, Lalji’s 15-year-old son is getting ready to join his father’s profession.

“I am teaching him how to make oil, buy medicines, and talk to clients, in fact all the tricks of this trade. He will have to continue in this profession,” said Lalji. The boy stood silently behind his father. It was hard to guess what was going on in his mind.

Shilpa Bhakare is a researcher and public health professional. Views are personal.