Villagers who migrated to other states for want of local livelihoods are back and do not wish to migrate again. They seek creation of local earning avenues 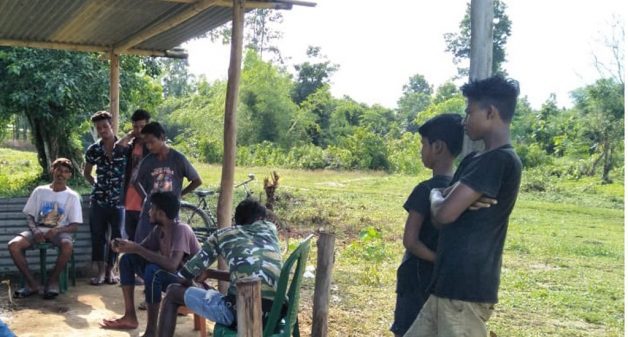 Returned migrant youth have not been able to find work. They wish to be skilled and employed locally. (Photo courtesy: Martin Rabha)

In two earlier articles in this series on returned migrants, we had provided a general background to the problems that seasonal migrants face. We provided a glimpse into the pattern of the trauma and coping of migrants through a few a real life stories. READ: Returned migrants: Despair and coping

Here we provide a broad characterization of the situation that migrants face, lest we be accused of missing the wood for a few trees. We use data gathered in three fairly large-scale surveys – one in Bihar, another in lower Assam and the third in over eight different states.

The first round of the large multi-state survey was conducted in late May 2020 by a consortium of NGOs anchored by VikasAnvesh Foundation. This covered mostly small and marginal farmers in ‘stranded India’, that is, far-flung districts with inferior Human Development Index (HDI) scores in 11 states.

Further, a fourth of these seasonal migrants had already gone back to work to their host locations. Nearly 50% were waiting to resume their work in the host cities and locations. At the time of the survey, Mahatma Gandhi National Rural Employment Guarantee Scheme (MGNREGS) provided work to about 40% of them.

A small proportion had engaged themselves in farm work on their own or on a neighbor’s farm, while about a fifth had not been able to find any work. Thus close to three-fourth of the seasonal migrants who had returned from host cities had either gone back to work or planned to. The dominant reason for this was the absence of any suitable work near home and a pressing need to earn money for the family.

A survey done by Sarva Seva Samity Sastha in Bihar reveals the situation of returned migrants from six districts of Bihar. The survey reveals that the ‘modal’ migrant from that region tends to be a male from the OBC or Dalit community, is under 35 years of age, is educated at most up to matriculation and tends to go alone for work through his social contacts and tends to go to Delhi, West Bengal, Gujarat, Punjab or Haryana.

They migrate due to lack of income opportunities at source location as well as for better standard of education and living at destination. In those locations they are mostly engaged in commercial establishments, construction or in agriculture work and make a moderate earning. They save about half of their income and send it back home every month.

90% them are left with food that may not last for three months. More than 40% of the returned migrants wish to stay back and work in their own villages and nearby towns, a quarter of the returned migrants wish to be trained with new skills and get engaged with new opportunities in the local area, 10% wish to be micro entrepreneurs with some financial, training and handholding support. A similar percentage wish to take up work in collectives.

More than 50% migrants suggested a need for financial and technical/skill training support to be engaged in their local areas. Majority who do not wish to migrate again suggested establishment of livelihood opportunities in local clusters utilizing locally available resources / infrastructure.

Seven Sisters Development Assistance (SeSTA), Guwahati did a survey in lower Assam districts. This area has population density similar to that of Bihar. The survey reveals that the modal migrant is a male under 30 years of age and migrates outside Assam.

Overall, the size of landholding of surveyed families was small with about an acre or less. Half of the families were either landless or had insignificant landholding. About 20% households had at least one member migrating in search of livelihoods, pointing to lack of opportunities in local areas.

However, migration was independent of landholding and may reflect lower returns and more tedious work in agriculture compared to work elsewhere. About equal proportion migrates to south Indian states, primarily to Telangana, Kerala or Tamil Nadu, and to Arunachal Pradesh, Nagaland or Manipur within northeastern region.

Two thirds of them worked as unskilled labor or as construction workers in destinations. About 10% found employment as security guards and 15% of them had occupations in high skilled category such as welder, electrician, driver, etc.

A majority of them returned from destinations in Shramik Trains or in buses; some used more arduous and uncertain modes. A majority of them do have assets such as share in family land or animals. Given their indifferent experience during this process, 60% of them wish to avoid going back to work. They wish to engage in animal rearing, growing horticultural crops and supplement it by finding opportunities based on their skill and experience.

Essentially, single males from families of lower social-economic strata of rural society migrate at a young age. They sell their muscle power and only a small proportion has any acquired skills. Their incomes and savings in destinations are not huge but the meager money that they earn is significant for them as they have limited opportunities back home.

Even so, 60% of returned migrants in Assam and 40% of them in other states would prefer avoiding migration if they could help. However, when asset and resources of the family are very small, these men have no option and have to go back.

Government schemes have made but a small contribution to their well-being after they returned. Clearly state and civil society need to act in a cohesive manner to find avenues for gainfully employing those returned migrants who do not wish to go back.