In a government – civil society partnership, approved agency rescues abandoned and illegally adopted children, and takes cares of them till their legal adoption comes through 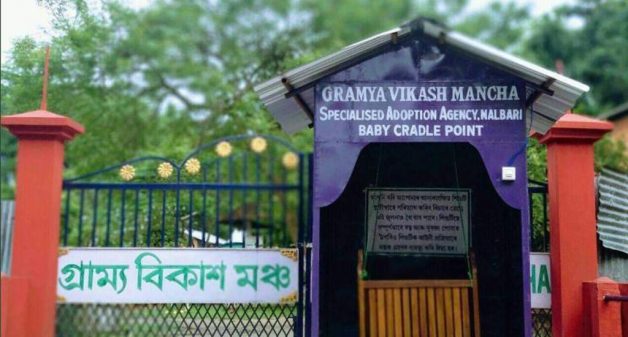 Specialized Adoption Agency is an initiative of the central government and functions under the Ministry of Women and Child Development. The initiative is part of the Integrated Child Protection Scheme that the government launched in 2009.

SAA is a program under Section 65 of the Juvenile Justice (Care and protection of children) Act, 2015, for housing orphans, abandoned and surrendered children that the Child Welfare Committee (CWC) places for adoption. The objective is ensuring safety and security of these children.

Children up to the age of 18 years, who are in need of care and protection are traced and found in different places across Nalbari district through the support of Child Welfare Committee (CWC) & District Child Protection Unit (DCPU).

Gramya Vikash Mancha (GVM) is one of the recognized child care institutions of SCPS. It is registered under sections 65(1) and 41 of Juvenile Justice (Care & Protection of Children) Act 2015. SAA team of Gramya Vikash Mancha intervenes in special cases of children under six years of age, by rescuing them, then taking care of them till they are legally adopted.

Sale of a child

When the District Child Protection Unit (DCPU) learnt about an illegal adoption of a baby delivered by a 35-year-old widow, DCPU relayed the information to the SAA team at Gramya Vikash Mancha, Nalbari. SAA team took the help of police to get the details and to locate the biological mother and the baby.

After five days, the team located the baby. Though there were conflicting and misleading reports, it was later learnt that the widow already had three children. Knowing that she would not be able to take care of a fourth child, she decided to sell the child.

Gramya Vikash Mancha’s team took the baby to their SAA center and then tried to restore the child to the biological mother. Given her family and financial situation, she said was not in a position to take care of the newborn, and surrendered the baby to the SAA team.

GVM’s work is based on creating awareness first. They conduct programs in different parts of Nalbari district to bring awareness to the community, about the process of legal adoption. They distribute information leaflets among the community for the purpose. Through SAA, they support and guide those who wish to adopt or surrender a child.

As GVM has been working in the development sector in Nalbari district since 1999, they have a good network. They have more than 500 volunteers, who bring cases of illegal adoption and abandonment to the notice of GVM’s SAA team. GVM conducts an orientation program to equip the volunteers in their work.

When the SAA team learns of a case, they visit the place and rescue the child, with the help of Child Welfare Committee that functions under the Department of Social Welfare, and DCPU. Usually, the children are rescued from villages and interior areas of the district.

In addition to taking the support of the CWC and DCPU, the team takes the help of the local police in handling these cases. As the SAA team rescues both male and female children below the age of six, women police personnel also accompany the team. If the child rescued is from another district, the SAA informs the DCPU and CWC of the said district.

Within this time period if the biological parents are willing to trace or take back their child, then SAA team restores the child to them. Otherwise, after two months Child Welfare Committee declares the child legally free for adoption (LFA). Then after due legal process, registered prospective adoptive parents can adopt the child.

If the team is unable to restore the child to biological parents, or facilitate adoption, the child remains at the SAA home till the age of six. As per the JJ Act, a child can stay in an SAA home only up to the age of six. Those aged 6 to 18 are sheltered in the nearest childcare institution.

A call from an unknown source at 8 pm revealed that a man had sold his 3-day-old infant to a couple who did not have a child for eight years. The couple then tried to shift the child to another district.

The SAA team rescued the child within the district boundaries at around 11.30 pm. The next day the baby was taken to the nearby hospital for a medical checkup. Now the baby is healthy and doing fine in GVM’s adoption center.

The team is now preparing for LFA of the child, with the help of CWC. After completion of mandatory procedures, parents who have registered with Child Adoption Resource information and Guiding System (CARINGS), an online portal for guidance on adoption procedures in India, can adopt LFA-declared children.

The SAA team facilitates the adoption. After successful adoption of the child, the team carries out a progressive post-adoption follow-up of the child. This is to ensure that the adoptive parents nourish and take care of the child properly.

Gramya Vikash Mancha’s SAA team maintains confidentiality regarding the details of the rescued children, thus preventing any outsider from accessing such information. However, the child, on attaining legal age, can access the details, if he / she desires.

SAA successfully restores a child to biological parents at times. There are instances when parents who are in distress and are unable to take the right decision.

Parents of a newborn baby had only Rs 150 and could not bear the hospital expenses. They already had a bank loan. The man said that his wife’s health was also critical; and without money for medical expenses, they decided to sell the baby.

Though the person to whom the baby was sold paid the hospital bills and gave the man money to purchase an e-rickshaw so that he could earn a living, it was illegal adoption. The SAA team restored the baby to the biological parents within 20 days. Considering their situation, the team provided essential items for the child and the mother.

Bhaskar Boro is in charge of documentation at Gramya Vikash Mancha. Earlier he worked at Seven Sister Development Assistance. Indra Pradhan is the district coordinator for the Specialized Adoption Agency program. Views are personal.